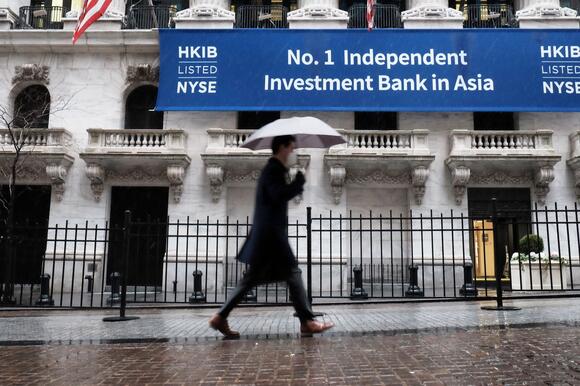 U.S. equity gauges on Friday ended sharply lower, capping a withering week for investors highlighted by the biggest weekly slide for the S&P 500 and the technology-laden Nasdaq Composite since March 2020.

How are stock indexes trading?

Read: When no stock-market lead is safe, here’s what history shows the Nasdaq’s near-term returns look like (it’s not pretty)

It was the week that was on Wall Street, a holiday-abbreviated stretch of trade that might have felt like an epoch for bullish investors.

A bearish pall is being cast over the market and volatility has become the new normal, with investors stomaching notable intraday prices swings to conclude a withering week.

The S&P 500 notched its third straight weekly loss, according to FactSet data. Nearly all the S&P 500’s 11 sectors ended lower for the day, led by communication services (XX:SP500) down 3.9%, and consumer discretionary (XX:SP500) off 3.1%. Consumer staples (XX:SP500) seen as a defensive play, were the exception, finishing flat on the day.

The stats were worse for the Nasdaq Composite, which booked its fourth straight weekly loss, after a sixth straight daily decline, marking its longest such losing streak since 2012.

After entering correction territory on Wednesday, the Nasdaq Composite has only deepened that rout. The index is down around 15% from its record close in November, nearing the 20% decline from a recent peak that would meet the commonly used definition for a bear market.

Much discussion around the recent bout of weakness in equities has been centered on the rise in yields and the prospect for higher benchmark rates. Markets have been dogged by a bond market selloff and fears of Federal Reserve tightening to combat surging inflation, and that has particularly hit rate-sensitive technology stocks.

Both Wednesday and Thursday saw indexes log gains early in the day only to surrender them later and on Friday losses deepened into the close, delivery another gut-punch for optimistic investors.

A bumpy start to earnings season also has dented investor confidence, with a string of downbeat bank results, and gloom about Netflix

“Peaking of revision momentum could be a catalyst for market weakness,” the Citi analysts wrote.

Opinion: Netflix admits that it is time to grow up, but Wall Street isn’t happy about it

Peter Cardillo, chief market economist at Spartan Capital, said lowered guidance from major banks has been a key factor. “Nevertheless, we are at the beginning of the earnings season and remain confident that overall grades will bolster the market’s fundamentals, thereby softening the blow of rising yields,” he said.

Meanwhile, cryptocurrencies came under pressure, with bitcoin (BTCUSD) tumbling below a key support level at $40,000, dragging the sector lower . The losses come a day after Russia’s central bank proposed banning the use and mining of cryptos.

Market Extra: How a Russian invasion of Ukraine could trigger market shock waves

The economic calendar is light Friday, featuring only the Conference Board’s December leading economic index, which rose 0.8% , in line with forecasts and signaling steady growth even as the spread of the omicron variant of the coronavirus nibbled at economic activity.

Which companies are in focus? How are other assets trading?

Despite the extensive losses seen for stock markets so far this year, it’s not over until it’s over — and investors should keep selling into any big rebounds higher. That’s the advice from a team of strategists at Bank of America, led by Michael Hartnett, in their Friday “Flow Show” note. In focus for the bank is increasing debate about whether the market has capitulated, which refers to investors basically giving up on trying to recapture lost gains.
STOCKS・15 HOURS AGO
MarketWatch

Shares of Deere & Co. DE, -14.07% fell 1.8% toward a three-month low in premarket trading Friday, even after the agriculture, construction and forestry equipment maker reported fiscal second-quarter profit and revenue that rose above expectations, as "strong demand" helped offset supply-chain pressures. Net income increased to $2.10 billion, or $6.81 a share, from $1.79 billion, or $5.68 a share, in the year-ago period. The FactSet consensus for earnings per share was $6.69. Sales grew 10.9% to $13.37 billion, above the FactSet consensus of $13.23 billion. Cost of sales rose 12.5% to $8.92 billion, as gross margin contracted to 33.3% from 34.3%. Production & Precision Agriculture sales rose 13% to $5.1 billion, Small Agriculture & Turf sales increased 5% to $3.6 billion and Construction & Forestry sales rose 9% to $3.45 billion. The company affirmed the sales growth outlook for fiscal 2022. Deere's stock has gained 6.3% year to date through Thursday while the S&P 500.
STOCKS・18 HOURS AGO
MarketWatch

MILLIONS of Americans are set to receive Social Security checks worth up to $1,657 tomorrow. The cash boost will come just 48 hours before Supplemental Security Income payments, worth up to $841, are set to land in around eight million bank accounts on April 29. Seniors with birthdays on the...
BUSINESS・24 DAYS AGO

Silk Road founder Ross Ulbricht is forfeiting billions of dollars worth of Bitcoin (BTC) and other crypto assets to the US government. According to a new court filing, Ulbricht will relinquish any claim to over 69,000 BTC and undisclosed amounts of Bitcoin Gold (BTG), Bitcoin SV (BSV) and Bitcoin Cash (BCH) worth a combined $3 billion as part of a settlement.
PUBLIC SAFETY・25 DAYS AGO
The Independent

A top US official in the Pacific has warned that America would have to “respond” if the Solomon Islands allows China to establish a military base there.Following a “constructive and candid” 90-minute meeting with prime minister Manasseh Sogavare, ambassador Daniel Kritenbrink said that the security deals between China and the Solomon Islands present “potential regional security implications” for the US and other allies.“We wanted to outline for our friends in the Solomons what our concerns are,” Mr Kritenbrink, US assistant secretary for East Asian and Pacific Affairs, told reporters.“We have respect for the Solomon Islands’ sovereignty. But we also...
FOREIGN POLICY・24 DAYS AGO
Business Insider

Elon Musk, the world’s wealthiest man, who thinks tunnels are immune to natural disasters, is purchasing Twitter. The company confirmed on Monday afternoon that it had accepted the billionaire’s offer. “Twitter, Inc. today announced that it has entered into a definitive agreement to be acquired by an entity wholly owned by Elon Musk, for $54.20 per share in cash in a transaction valued at approximately $44 billion,” reads the official press release. “Upon completion of the transaction, Twitter will become a privately held company.”
BUSINESS・25 DAYS AGO
Markets Insider

Indonesia accounts for about half of the world's supply of palm oil — the world's most widely used vegetable oil.
INDUSTRY・26 DAYS AGO
Fortune

Sign up for the Fortune Features email list so you don’t miss our biggest features, exclusive interviews, and investigations. Shanghai’s 25 million residents have endured an extreme COVID lockdown for nearly a month—and now a new nightmarish topic is trending on Weibo, the country’s Twitter-like social media platform.
PUBLIC HEALTH・25 DAYS AGO
MarketWatch

I am 33 years old, I currently make just over $120,000 a year, including an annual bonus, and my company has gifted me with around $300,000 in equity in the firm, although our stock is brand new, so it is constantly swinging up and down. I put around 6% toward a 401(k) and another 4% toward personal savings, investments and emergency cash.
STOCKS・3 DAYS AGO

Tesla has started underwriting auto insurance. Buffett previously said he would bet against any car company becoming a big winner in the space.
ECONOMY・25 DAYS AGO
MarketWatch

COLOMBO, Sri Lanka (AP) — Sri Lankan authorities on Friday closed schools and asked public officials not to come to work in a desperate move to prepare for an acute fuel shortage that is expected to last days amid the nation’s worst economic crisis in decades. The Public...
ASIA・22 HOURS AGO
MarketWatch