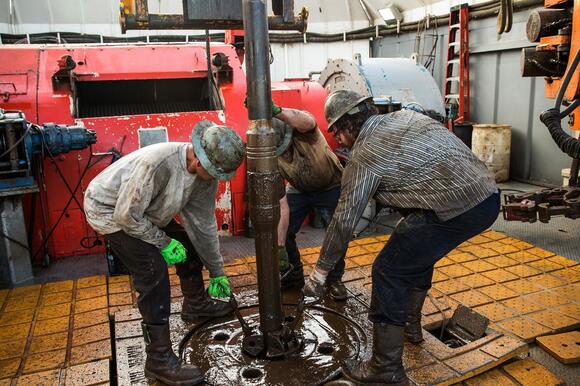 Oil futures finish lower on Friday, down a second session in a row from the more than seven-year highs set earlier in the week. The decline follows a rise in U.S. crude inventories and a selloff in stocks that has weighed on overall sentiment.

“A surge in risk-off money flows in the back half of the week have caused oil futures to give back the bulk of this week’s gains,” said Tyler Richey, co-editor at Sevens Report Research. “Traders are becoming increasingly sensitive to rate-hike expectations and fears that the Federal Reserve could choke off the economic recovery.”

Both WTI and Brent closed Wednesday at their highest since October 2014 and marked a fifth consecutive weekly gain.

“Crude prices may not have a one-way ticket to $100 oil, but the supply-side fundamentals certainly support that could happen by the summer,” said Edward Moya, senior market analyst at OANDA, in a market update.

Read: Oil prices may soon rise to $100 a barrel. Here why

“The next few trading sessions could be difficult for energy traders as oil prices may move more so on investor positioning ahead of Wednesday’s FOMC policy decision and over a handful of brewing geopolitical risks, that include Russia-Ukraine tensions, Iran nuclear talks, and developments with global handling over North Korea,” Moya said.

See: What Russia-Ukraine tensions mean for markets as Putin weighs next move

Crude prices had “recently been reacting only to news that supported higher prices, such as temporary supply outages that have meanwhile been resolved. The question now is whether the correction will continue or whether the lower price level will be viewed by market participants as a buying opportunity,” said Carsten Fritsch, analyst at Commerzbank, in a note. “Both scenarios are possible as things currently stand.”

Analysts said a continued slide in equities was taking a toll on sentiment for other assets viewed as risky. A sharp rise in Treasury yields tied to expectations for a series of rate increases by the Fed that is expected to be more aggressive than previously expected has been blamed for a stock-market selloff that’s sent the tech-heavy Nasdaq Composite (COMP) into correction territory, while also dragging down other major indexes, including the Dow Jones Industrial Average (DJIA) and the S&P 500 (SPX)

Growing risks to global supplies provided support for oil prices overall for the week, spurring talk of an eventual rise to $100 a barrel. WTI and Brent haven’t traded at a level that high since 2014.

The market has been closely following geopolitical developments this month, including unrest in Kazakhstan, an attack on oil infrastructure in the United Arab Emirates, a temporary disruption to crude flows through the Kirkuk-Ceyhan pipeline and the possibility of a Russian invasion of Ukraine.

On Friday, tensions in the Middle East worsened as a Saudi-led coalition airstrike on Houthi-controlled territory in Yemen hit a prison, killing dozens of people, according to The Wall Street Journal .

Oil prices are likely to reach $100, but “without a serious geopolitical shock,” that may not happen until next year, Matthew Parry, head of long-term analysis at Energy Aspects, recently told MarketWatch.

“The main cause of this predicted upside will be total liquid [petroleum] demand consistently outpacing relatively anemic supply growth — a consequence of years of insufficient [capital expenditures] — as persistent deficit coincides with relatively low levels of global stocks,” he said.

“The price action in natural gas has been all about weather this week, as the extended forecasts for February have come in warmer than average,” said Sevens Report’s Richey. But some revisions calling for moderately colder temperatures than initially expected sparked some profit-taking, “as the market was pretty deeply oversold on a low time frame basis.”

Wheat futures climbed by the daily limit on Monday, following India’s plans to limit most of its exports of the commodity, as fallout from the Russia-Ukraine war continues to reverberate. Soft red winter wheat for July delivery. W00,. +4.82%. was up 49.5 cents, or 4.2%, at $12.27 a bushel...
AGRICULTURE・1 DAY AGO
MarketWatch

India says open to exporting wheat to needy nations, despite ban on exports

Silk Road founder Ross Ulbricht is forfeiting billions of dollars worth of Bitcoin (BTC) and other crypto assets to the US government. According to a new court filing, Ulbricht will relinquish any claim to over 69,000 BTC and undisclosed amounts of Bitcoin Gold (BTG), Bitcoin SV (BSV) and Bitcoin Cash (BCH) worth a combined $3 billion as part of a settlement.
PUBLIC SAFETY・21 DAYS AGO

"The West made the fatal mistake of becoming reliant on Russian energy supplies," Mikhail Khodorkovsky said. "The West has to pay for its mistakes."
ENERGY INDUSTRY・21 DAYS AGO
Markets Insider

Indonesia accounts for about half of the world's supply of palm oil — the world's most widely used vegetable oil.
INDUSTRY・22 DAYS AGO
Newsweek

Sign up for the Fortune Features email list so you don’t miss our biggest features, exclusive interviews, and investigations. U.S. tariffs on Chinese imports survived a change in administration, but the trade-war-era levies may not survive record inflation. “We’re certainly looking at where we see costs being raised and,...
PRESIDENTIAL ELECTION・20 DAYS AGO

Russia has announced it will deploy its recently tested “Satan II” missile by the autumn, as tensions between Moscow and the west mount amid the Ukraine war.The Kremlin announced the first test launch of its new, nuclear-capable Sarmat intercontinental ballistic missile (ICBM) system on Wednesday, with experts warning the warhead could target the UK as well as Europe and the US. The Sarmat is capable of carrying 10 or more nuclear warheads and decoys, and of striking targets thousands of miles away in the United States or Europe.This week's test, after years of delays due to funding and technical...
POLITICS・22 DAYS AGO
Benzinga

Musk On Housing Bubble Burst: 'They Dug Their Own Graves – A Lesson We Should All Take To Heart'

Tesla, Inc. (NASDAQ: TSLA) CEO Elon Musk's eclectic thoughts and views are usually on full display in his tweets. This time around, he shared his views on the housing market collapse. What Happened: Musk's outlook comes in response to a tweet by Dogecoin (CRYPTO: DOGE) co-founder Billy Markus, who goes...
REAL ESTATE・2 DAYS AGO
Reuters

LONDON, May 17 (Reuters) - Top baby formula makers Reckitt Benckiser (RKT.L) and Nestle have ramped up supplies to the United States to resolve a shortage that has emptied shelves and caused panic among parents. Baby formula aisles at U.S. supermarkets have been decimated since top U.S. manufacturer Abbott Laboratories...
GROCERY & SUPERMAKET・47 MINUTES AGO
Benzinga