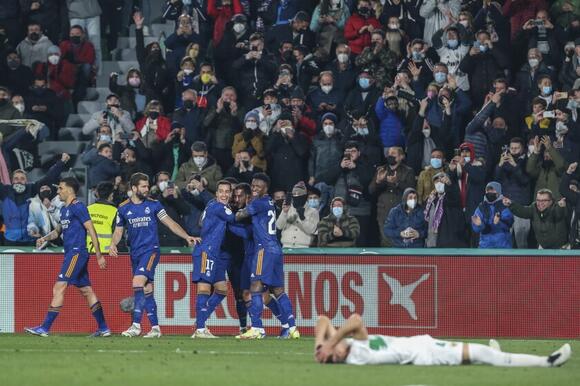 Real Madrid and host Athletic Bilbao will face each other for the fourth time in two months when they meet in the Copa del Rey quarterfinals.

Also in Friday's draw for the single-game round, Valencia hosts Cádiz, Real Betis plays at Real Sociedad and host Rayo Vallecano is paired with Mallorca.

The quarterfinals will take place in two weeks and will likely see clubs missing their South American players on international duty. Vinícius Júnior, Rodrygo and Casemiro are among the Madrid players expected to be absent. Rayo will miss Radamel Falcao, and Betis' absentees will include goalkeeper Claudio Bravo.

Athletic got past Barcelona in the round of 16, while Madrid eliminated Elche. Both matches went to extra time on Thursday.

Athletic was runner-up to Barcelona in last year's Copa final. It lost the previous final to Basque Country rival Real Sociedad. Athletic's last title in the competition came in 1984. Madrid is seeking its first Copa trophy since 2013-14.

Atlético Madrid was eliminated by Sociedad on Wednesday.