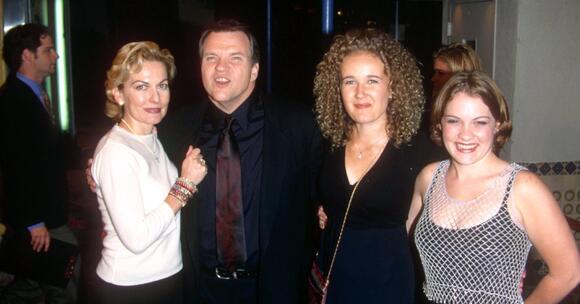 Legendary rock singer Meat Loaf had a powerhouse voice and brought one of the best-selling album trilogies to life during his career. The “Bat Out of Hell” singer, who was well-loved by fans, friends and his supportive family, died on January 20, 2022. He is survived by his wife, Deborah Gillespie, and his two daughters, Pearl and Amanda.

“Our hearts are broken to announce that the incomparable Meat Loaf passed away tonight surrounded by his wife Deborah, daughters Pearl and Amanda and close friends,” a post on the performer’s Facebook read. “His amazing career spanned six decades that saw him sell over 100 Million albums worldwide and star in over 65 movies, including Fight Club, Focus, Rocky Horror Picture Show and Wayne’s World.”

Meat Loaf, whose real name was Michael Lee Aday, launched his career in the ‘60s with the band Meat Loaf Soul. He gained notoriety with his role in the musical Hair before releasing Stoney & Meat Loaf, his first Motown album. The Fight Club actor appeared in both the theater production of The Rocky Horror Picture Show and the successful film released in 1975. It was in 1977 that the world fell in love with his larger-than-life personality with his Bat Out of Hell album, selling more than 40 million copies.

“Bat Out of Hell remains one of the top 10 selling albums of all time,” the Facebook post continued. “We know how much he meant to so many of you and we truly appreciate all of the love and support as we move through this time of grief in losing such an inspiring artist and beautiful man.”

His second studio album, Dead Ringer, was released in 1981. That year, his only biological daughter, Amanda Aday, was born. Meat Loaf married his first wife, Leslie G. Edmunds, in 1979 and became the stepfather of her daughter, Pearl, from a previous relationship. The Brit Award winner always viewed Pearl as his own and shared a sweet sentiment about letting her sleep inside of a guitar case in an interview with Classic Rock Revisited.

“The new ones are all felt lined,” he said of the guitar cases that his daughter slept in. “We would put her blankets in there and she would take a nap. They were high enough on the sides and we would lock the wheels on it. We would be in the dressing room and she would go to sleep.”

Keep scrolling to find out more about Meat Loaf’s daughters Pearl and Amanda.

Josh Brolin’s Favorite Role Is Being a Dad! Cutest Photos of the ‘Avengers’ Actor’s 4 Kids

Avengers: Endgame actor Josh Brolin is a superhero dad! Spending time with his four kids is something he values above anything else. The Academy Award nominee shares son Trevor and daughter Eden with ex-wife Alice Adair, and daughters Westlyn and Chapel with wife Kathryn Boyd. Josh’s marriage to Alice lasted...
FAMILY RELATIONSHIPS・29 DAYS AGO
Closer Weekly

Love Story actress Ali MacGraw is so proud to be a mom! The Golden Globe winner welcomed her only child, son Josh Evans, with her second ex-husband, Robert Evans, in 1971. Keep scrolling to learn more about Josh. Who Is Ali MacGraw’s Son Josh Evans?. The Goodbye, Columbus actress...
CELEBRITIES・9 DAYS AGO
Closer Weekly

Andy Cohen Loves Being a Dad to Kids Benjamin and Lucy! Meet the TV Host’s 2 Children

Bravo host Andy Cohen is a family man! The proud dad’s life changed when he welcomed his son, Benjamin Allen Cohen, via surrogate in February 2019. He decided to expand his family once more with the arrival of his daughter, Lucy Eve Cohen, in April 2022. After becoming a...
FAMILY RELATIONSHIPS・16 DAYS AGO
Closer Weekly

Dr. Phil and Wife Robin Have the Sweetest Bond With Their 2 Sons! See Their Family Photos Over the Years

Parenthood has been a dream come true for Dr. Phil McGraw! The television host and his wife, Robin McGraw, are the proud parents of two sons: Jay McGraw and Jordan McGraw. Both Jay and Jordan have started families of their own and love snapping photos with their kids and parents for their fans to see.
FAMILY RELATIONSHIPS・8 DAYS AGO

Stevie Wonder Is a Father of 9! See Rare Photos of the Singer With His Kids Over the Years

On top of making his mark in the music industry with his innovations in the R&B genre, Stevie Wonder is a father of nine kids. The “Superstition” singer has stepped out for rare appearances with his children over the years, some of whom are also entertainers. Stevie first...
FAMILY RELATIONSHIPS・6 DAYS AGO
Hello Magazine

Robin Roberts got emotional as she opened up about her relationship with partner Amber Laign, especially in the midst of a challenging health battle. The Good Morning America star made an appearance on The Ellen DeGeneres Show to promote her new book, Brighter By the Day. VIDEO: Robin Roberts enjoys...
CELEBRITIES・24 DAYS AGO
The Independent

A wedding caterer has been praised for turning down all events where the bride and groom are asking their guests to pay for their own meals.In a recent post shared on the discussion-based site Mumsnet, a user explained that they run a “wedding catering company” that is “based on a food truck” and works for “less formal weddings”.They then revealed that some couples who have reached out to them about catering have been expecting their guests to purchase their own dinners at their weddings, a concept that the caterer said they have been “turning down” because they believe it is...
RELATIONSHIP ADVICE・24 DAYS AGO
Outsider.com

On Monday (April 25th), long-time “Wheel of Fortune” co-host Vanna White took to her Instagram account to announce her cat Stella passed away. The feline was 16 years old. “My sweet Stella has gone to kitty heaven,” Vanna White declared in the social media post, which features a snapshot of her kissing the cat. “I miss her so much and will cherish the special memories of the 16 years we had together.”
PETS・23 DAYS AGO

The Today Show stars, including Hoda Kotb, Savannah Guthrie, and Craig Melvin, are reeling from the death of a beloved fellow Today host, one whose hiring onto the show made history at NBC studios. The co-hosts took a moment out of Monday morning's show to honor the legacy of Jim...
CELEBRITIES・24 DAYS AGO
Upworthy

Gender reveals have firmly become part of the 21st-century parenting journey. While once you had simply to decide whether to wait until your due date to know the sex of your baby, now you have the option of whether to shower your nearest and dearest with pink or blue fireworks, balloons, confetti, or cake to announce the big boy or girl baby news.
FAMILY RELATIONSHIPS・28 DAYS AGO
Closer Weekly

Goldie Hawn Is the Epitome of Effortless Beauty! See Her Stunning Makeup-Free Photos So Far

Goldie Hawn has entertained fans with her incredible acting skills, lovely personality and beautiful looks since landing her first role on the television series Good Morning World in 1967. The Academy Award winner has also revealed secrets of her beauty routine over the years and gone makeup-free in several stunning photos.
CELEBRITIES・22 DAYS AGO

Depp said he discovered Disney would not recast him in "Pirates" days after Amber Heard's Washington Post op-ed article was published.
FAIRFAX, VA・24 DAYS AGO
SheKnows

Click here to read the full article. It seems like everyone was rooting for Renée Zellweger and Ant Anstead to get together, including an unexpected duo: the Property Brothers. Drew and Jonathan Scott recently revealed that they were the ones that ended up getting Zellweger and Anstead to meet, and subsequently fall in love. And their hard work ended up paying off! Back on April 14, 2022, the Scott brothers sat down with ExtraTV to talk about everything from Drew’s upcoming fatherhood to Jonathan loving GF Zooey Deschanel’s Vanity Fair gown. While we loved the entire interview, we’re losing it over...
CELEBRITIES・25 DAYS AGO
Closer Weekly

Sandra Bullock Is All About Her 2 Kids! See the Actress’ Rare Photos With Louis and Laila

Sandra Bullock isn’t one to share photos of her two kids on social media. Thanks to rare pics from her fun outings with son Louis and daughter Laila, however, fans have gotten glimpses inside the Bird Box actress’ life. Sandra became a mom when she adopted her eldest...
CELEBRITIES・7 DAYS AGO
The Independent

Johnny Depp praised Amber Heard for having “the strength of a thousand men” in a text to her mother, the Heard legal team revealed in court. As proceedings in Mr Depp’s defamation trial against Ms Heard resumed on Monday, her attorney Ben Rottenborn said Mr Depp was going into detox for addiction to pain killers when he spoke to Ms Heard’s mother. Johnny Depp trial – latest updatesOn 19 August 2014, Mr Depp wrote: “my dearest Paige, how unbelievably kind and pure your message was. I am beyond thankful to have you in my life. There’s no luckier man on...
CELEBRITIES・24 DAYS AGO
Closer Weekly

Melissa Gilbert is proud of her blended family, so it doesn’t come as a surprise she’ll share photos when they all get together. The Little House on the Prairie alum is the doting mom of two kids and the loving stepmom of five. Melissa shares her eldest son,...
FAMILY RELATIONSHIPS・14 DAYS AGO
Newsweek

"Not only was that so disgusting but she was also starving your child," one user commented.
FAMILY RELATIONSHIPS・23 DAYS AGO
Popculture

Netflix has canceled another one of its major shows, with this one getting the ax after only two seasons. Variety reports that hit sci-fi drama Raising Dion has been dropped by the streamer, following its recent season debut. The news seems to have been revealed by series star Sammi Haney, who shared the news with fans on Instagram. "Sad to say that Raising Dion is CANCELED [sic] Thank you for all of the amazing support we got from all of our wonderful fans!" Haney wrote, in part. "Season 2 was a success, equal to Season 1, even if just looking at how many people watched all of it and wanted a season 3!"
TV SERIES・23 DAYS AGO
Closer Weekly

Tia Mowry’s 2 Kids With Husband Cory Hardrict Are Her Everything! Meet Cree and Cairo

Family means everything to Tia Mowry! She shot to fame with her twin sister, Tamera Mowry, on the hit sitcom Sister, Sister in 1994. The Family Reunion star is now a mom to two children, Cree Taylor Hardrict and Cairo Tiahna Hardrict, with her husband, Cory Hardrict. Tia and Cory...
FAMILY RELATIONSHIPS・10 DAYS AGO