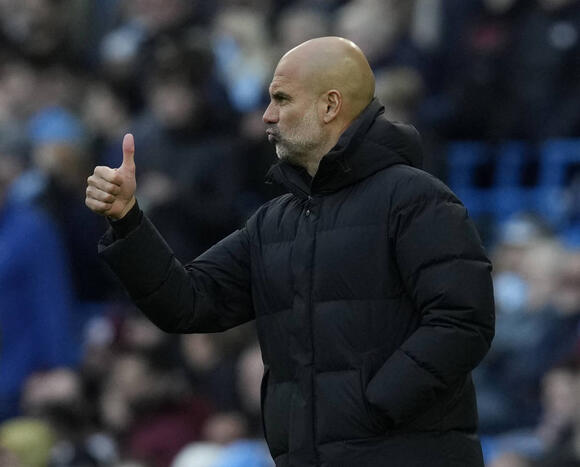 Sitting 11 points clear at the top of the Premier League table, the dreaded winter period has turned out to be quite the breeze for Manchester City.

Picking up crucial wins against the likes of Chelsea and Arsenal along the way, Pep Guardiola's side have emerged as strong title favourites - despite a severe Covid outbreak at the City Football Academy.

The Blues' early exit from the Carabao Cup at the hands of West Ham has also allowed players extra rest in a period where the semi-finals of the competition are scheduled to be played.

Speaking in his pre-match press conference ahead of a trip to St Mary's in the Premier League to face Southampton, Pep Guardiola has revealed his side will not be travelling abroad during the week-long winter break.

"Two days off, rest a little bit. We spoke with the club, we don't go anywhere right now because of the virus. Everyone is spending time with their families," the Catalan said in response to a question on the team's plans.

Other clubs like Newcastle United are travelling to Saudi Arabia for warm weather training, however the Blues have opted against the idea, with health of players at the very forefront of their thinking.

With 12 consecutive wins in the Premier League, the mood in the camp is at an all-time high, but Pep Guardiola refused to be dragged into such talk, and is simply focussed on Ralph Hasenhüttl's outfit.

"Just focus on Southampton, what we have done so far. I couldn't care less, the mood is good, I'm so satisfied with the players," the manager concluded.

Gabriel Jesus has reportedly told friends that he is 'eager' to link up with Mikel Arteta once again at Arsenal and become the main striker at the Emirates Stadium.
PREMIER LEAGUE・2 DAYS AGO
CityXtra

Manchester City midfielder Ilkay Gundogan has revealed he will soon hold talks with the club over his future as he enters the final year of his contract at the Etihad Stadium.
PREMIER LEAGUE・1 DAY AGO
CityXtra

Manchester City will not stand in Oleksandr Zinchenko's way should he desire an exit this summer, according to a new report.
PREMIER LEAGUE・1 DAY AGO
CityXtra

Aymeric Laporte has confirmed his absence from Spain's upcoming Nations League matches in a statement via social media, after picking up a knee injury.
PREMIER LEAGUE・2 DAYS AGO

Rodri has been discussing the imminent arrival of Erling Haaland, with the Norwegian set to join the club on July 1st.
PREMIER LEAGUE・16 HOURS AGO
CityXtra

US men's international and Manchester City goalkeeper, Zack Steffen has been forced to withdraw from his country's duties due to family reasons, it has been confirmed in recent hours.
PREMIER LEAGUE・15 HOURS AGO
CityXtra

Manchester City have paid an extra £1.3 million to ensure Julian Alvarez's loan deal with River Plate is terminated in time for the forward to join the Premier League champions for pre-season ahead of the upcoming campaign.
PREMIER LEAGUE・2 DAYS AGO
CityXtra

Gabriel Jesus' agent Marcelo Pettinati has revealed when his client will discuss his next move away from Manchester City this summer.
PREMIER LEAGUE・14 HOURS AGO

Erling Haaland has jetted off once again this week, after completing his various media duties with his new club, ahead of his official arrival at Manchester City on July 1st.
PREMIER LEAGUE・2 DAYS AGO
CityXtra

Southampton Considering Moves For Up To FOUR Manchester City Players

Premier League side Southampton are reportedly holding a level of interest in a number of Manchester City's rising academy talents, with a view to potentially making loan moves for one or more of the names in question.
SOUTHAMPTON, NY・1 DAY AGO
CityXtra

A new report has suggested that Manchester City's Premier League title celebrations were the reason for manager Pep Guardiola not attending the LMA Awards on Tuesday evening.
PREMIER LEAGUE・22 HOURS AGO
CityXtra

Former Manchester City striker and overall club legend, Sergio Aguero has given his verdict on his former club’s acquisition of striker Erling Haaland, and has made a prediction ahead of the Norwegian's arrival in Manchester.
PREMIER LEAGUE・19 HOURS AGO
The Independent

Violent clashes affecting Liverpool fans in Paris have been dubbed the “worst” seen at a European football match, a UK police force has said.Liverpool have called for an investigation after thousands of supporters were held outside of the Champions League final before kick-off at the Stade de France, with tear gas, pepper spray, batons and shields used to disperse fans. Liverpool fan Gary Brennan, who was at Hillsborough and had travelled to the match in France on a speedboat, described the situation as a ‘shambles’. He told Sky News fans were ‘treated like cattle’ and it could have led...
UEFA・44 MINUTES AGO