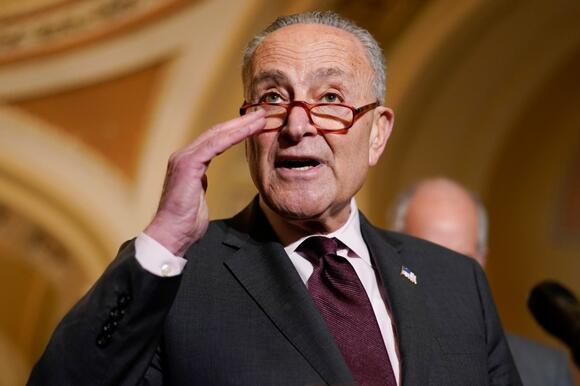 WASHINGTON (Nexstar) — The U.S. Senate failed to pass voting rights legislation, delivering a huge blow to Democrats — but not an unexpected one.

Despite failing to pass the legislation several times now, Democrats have vowed not to give up.

After another failure to advance federal voting rights legislation, Democrats could decide to break up the legislation into individual bills. Sen. Ron Wyden (D-OR) says there are provisions he strongly favors.

Since the 2020 election, dozens of states passed or are trying to pass laws that Democrats say restrict voting.

“We were making a lot of progress until Donald Trump came along and started spewing lies about vote-by-mail,” Wyden added.

“They should not engage in a similar lie that Republicans across the country are making it much harder for minorities to vote,” Romney said.

Earlier this week, Romney said Democrats should focus on working with Republicans on what he sees as the real threat to elections.

Pelosi against push to ban stock trading by lawmakers

“That is the corruption of the counting of the ballots, the certification of elections, and the congressional provisions for accepting and counting a slate of electors,” he said.

Romney and other Republicans appear open to reforming the Electoral Count Act of 1887 to make it harder to overturn the results of future elections.

Democrats, including the White House, support the bill.

“We just have always wanted to be clear that it was not a substitute for voting rights legislation,” White House Press Secretary Jen Psaki said.

But some Democrats say that point is moot if voting is unfairly restricted and they will keep pushing to increase access to the ballot.

“The fact is that if people can’t vote initially, you don’t even get to that stage,” Wyden said.

The Senate overwhelmingly approved a $40 billion infusion of military and economic aid for Ukraine and its allies on Thursday as both parties rallied behind America’s latest, and quite possibly not last, financial salvo against Russia’s invasion.
FOREIGN POLICY・3 HOURS AGO
WATE

A man has been charged with kidnapping and evading arrest after officers say the victim begged for help from a KFC employee.
MEMPHIS, TN・2 DAYS AGO
WashingtonExaminer

When President Joe Biden named Kamala Harris as his running mate, he promised his former campaign rival would be one of the most influential voices in the White House.
PRESIDENTIAL ELECTION・23 DAYS AGO

With a key Senate primary still in the balance, Donald Trump is again casting doubt on election integrity without offering any evidence.
PENNSYLVANIA STATE・23 HOURS AGO
Business Insider

MEXICO CITY — Mexican President Andrés Manuel López Obrador on Monday urged U.S. Latinos not to vote in November’s midterm elections for politicians who have “mistreated” them, in response to a comment by former U.S. President Donald Trump. Trump boasted at a rally in...
PRESIDENTIAL ELECTION・23 DAYS AGO
Business Insider

An attorney for the campaign said they thought they were allowed to use the funds based on a "good faith" understanding of the "highly confusing" rules.
FLORIDA STATE・23 HOURS AGO
Newsweek

Harvard polled Americans under 30 who are likely to vote in the midterms and found 85% of them want some government action on student loan debt.
PRESIDENTIAL ELECTION・24 DAYS AGO

The former president referenced scoring well on a cognitive test in 2018, which is designed to detect whether a person has early stages of dementia.
DELAWARE COUNTY, OH・25 DAYS AGO
WATE

A controversial bill that was signed into law by Tennessee Governor Bill Lee last year has now been struck down by a federal judge.
TENNESSEE STATE・2 DAYS AGO
The Atlantic

Last Monday, Malcolm Nance, an MSNBC talking head and former sailor in the United States Navy, showed up on the channel by satellite from Ukraine, dressed to kill. He wielded an assault rifle and wore full-camo military dress, including a ballistic helmet, and U.S. and Ukrainian flag patches. About a month ago, he said, he decided he was “done talking.” He then talked about how he had joined Ukraine’s international legion to help the country “fight [against Russia’s] war of extermination—an existential war.” Others have traced a similar journey. Andy Milburn, a journalist and ex-Marine who stopped writing and began training Ukrainians for combat, wrote an article about how he, too, was finished writing articles about Ukraine. “It just started to seem so frivolous,” he wrote, solemnly. “I didn’t want to be an observer.”
MILITARY・23 DAYS AGO
WATE

Nissan is considering a third manufacturing plant to be built in the United States, and it's possible it could be located in Tennessee.
TENNESSEE STATE・2 DAYS AGO

Summer travel is already starting, and gas prices continue to surge across the country. The national average for a gallon of regular fuel was $4.48 as of Monday morning.
CALIFORNIA STATE・3 DAYS AGO
WATE

Winners and losers from Tuesday’s primaries

Here are the big winners and losers so far.
PENNSYLVANIA STATE・1 DAY AGO
WATE

Only 28 percent of children 5-11 have received the first two shots, according to data compiled by the Centers for Disease Control and Prevention.
KIDS・2 DAYS AGO
WATE

The Knoxville Police Department said Tuesday the charges against a woman accused of kicking a KPD officer in the groin after a traffic pursuit in August 2021 - had been dismissed. Charges against the arresting KPD officer, who has since resigned after pleading guilty to lying about different pursuit in January, were brought forward in an April indictment.
KNOXVILLE, TN・2 DAYS AGO