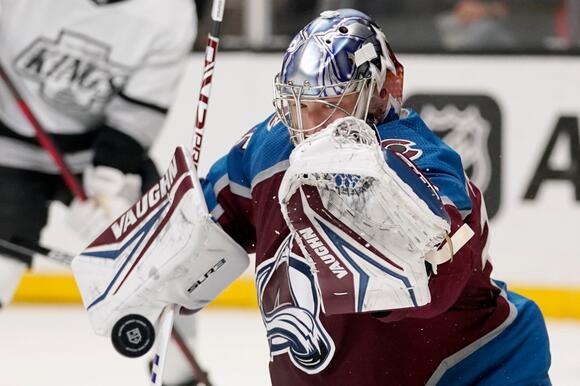 LOS ANGELES (AP) — Playing the second game of a back-to-back set, the Colorado Avalanche looked tired. They weren’t able to bombard the Los Angeles Kings with their typical offensive brilliance, finding themselves on the wrong side of a 14-shot disparity.

And they still won.

Kiefer Sherwood scored his first goal in nearly three years, Mikko Rantanen had a power-play goal and the Avalanche stayed hot with a 4-1 victory over the Kings on Thursday night.

“You know, we’re used to having the puck for long stretches of time, and that wasn’t really the case tonight,” said Darcy Kuemper, who made 40 saves. “But we found a way to win in a different style, and that’s really important.”

Nicolas Aube-Kubel and Devon Toews also scored for the Avalanche, who have won five straight and are 10-0-1 in their past 11 after also defeating Anaheim 2-0 on Wednesday.

Jonathan Quick made 23 saves for the Kings, who have lost three straight.

“We need some things for us to go right for us offensively,” Kings coach Todd McLellan said. “We explode for five or six (goals) and then all of a sudden, we’re back down to one or two.”

Despite taking a 2-0 lead at 3:06 of the second period, with Sherwood whipping around for a wrist shot on a loose puck in the right circle to score his first goal of the season, Anze Kopitar got the Kings back within a goal at 2-1 on the power play at 8:58 after Kuemper took himself out of the play trying to cut off an angle.

Los Angeles kept creating chances and just lacked a finishing touch, which gave Colorado a chance to regroup while still carrying the lead into the third.

“Even just the simplest of tasks, plays, breakouts, regroups, we were not moving the puck efficiently. … And to me, that’s a sign of fatigue. We didn’t look like we had a lot of energy,” Avalanche coach Jared Bednar said. “We had a talk after the second period and just said, ‘We just got to come together. We’ve got to find a way to get it done.’”

Aube-Kubel did just that, coming out of the penalty box at the right time after an unnecessary foul in the offensive zone and collecting Logan O’Connor’s stretch pass to score on a breakaway and restore a two-goal lead at 4:11.

“I think he didn’t see me at first and then he was about to clear it, and then he kind of like slowed his motion down,” Aube-Kubel said. “That’s why the pass wasn’t like really sharp.”

Toews got an empty-netter with 1:35 remaining.

“Well, we played with them,” McLellan said. “I think last year at the end of the year it wasn’t a real game when we played against ’em, but we didn’t have a lot of the pieces that we have right now. … I really believe we can play with any team in the league.”

Sherwood had not scored since March 26, 2019, when he was a rookie with the Ducks — going 38 games over the past four seasons without finding the back of the net.

Kings C Quinton Byfield, the No. 2 pick in the 2020 draft, made his season debut. Byfield was set to make the team coming out of training camp before breaking his ankle in a preseason game on Oct. 5, and his return was further delayed after testing positive for COVID-19 in late December.

“I think I was definitely a lot more comfortable,” said Byfield, who had an assist in six games last season. “Last year, it was still my first pro year, and it was kind of weird playing with all the people you grew up watching almost, you know, playing against all those guys. Now I’ve just got a feeling I know I can play with them and contribute a little bit.”

Los Angeles will play 10 of its next 11 on the road, returning home Feb. 15 against Edmonton in a game that was postponed from December because of concerns about cross-border travel.

(KDVR) -- The first game of the second round will take place on Tuesday in Colorado at Ball Arena at 7:30 P.M. During the regular-season series against the Blues, the Avalanche posted a 2-1-0 record.
DENVER, CO・7 DAYS AGO
KREX

An investigation is underway following alleged threats made against Colorado Avalanche center Nazem Kadri after the playoff game against the St. Louis Blues on Saturday night.
SAINT LOUIS, MO・9 HOURS AGO
KREX

Some tax relief is on the way for Coloradans across the state. Gov. Jared Polis signed bills on Monday that aim to decrease property tax assessment rates.
COLORADO STATE・6 DAYS AGO
KREX

(WREG) — A man has been charged with kidnapping and evading arrest after officers say the victim begged for help from a KFC employee.
MEMPHIS, TN・6 DAYS AGO

In an effort to be more transparent with COVID hospital data, Colorado's health department is breaking down COVID hospitalizations to distinguish who is in the hospital because of the virus, vs. who happens to be positive but is hospitalized for another reason.
COLORADO STATE・3 DAYS AGO
KREX

The body was found in about nine feet of water just west of the islands. No foul play has been suspected involving this incident.
DELTA, CO・9 HOURS AGO
KREX

Can the U.S. close a gender pay gap widened by the pandemic?

(NewsNation) — In the U.S. the average woman makes 83 cents for every man’s $1 for the same work. This gap has only been closed by 2 cents since 2015.
PUBLIC HEALTH・6 DAYS AGO

Multiple blunt force injuries identified as cause of death

A 49-year-old male involved in the May 14, 2022 incident at the Grand Junction Regional Airport suffered multiple blunt force injuries resulting in his death.
5 DAYS AGO
KREX

(The Hill) – Eric Clapton — one of the most prominent opponents of vaccination mandates — says he’s postponing performances after testing positive for COVID-19.
PUBLIC HEALTH・6 DAYS AGO
KREX

Polis signs bills into law to save Coloradans money

(KDVR) - In a city as large as Denver, 911 dispatchers deal with thousands of calls every day. But any dispatcher will tell you there are certain calls that stick with them.
DENVER, CO・6 DAYS AGO

Passenger dies during Alaska Airlines flight from Seattle to Nashville

(WKRN) — A passenger died while on a flight to Nashville on Monday, Nexstar's WKRN has confirmed. The cause of death has not yet been released by the medical examiner's office.
NASHVILLE, TN・6 DAYS AGO
KREX

The Mavericks punch their ticket to the championship game

The Mavericks knock off MSU Denver to punch their ticket to the championship game. Caleb Farmer was huge with 5 RBIs on 5 hits. He hit 2 home runs. Conrad Villafuerte had 4 RBIs on 3 hits. The Mavericks mashed out 19 hits in the 14-10 victory. They will play for the championship on Saturday at 4:30 pm
GRAND JUNCTION, CO・9 DAYS AGO
KREX

As this year's colorado legislative session draws to a close, lawmakers met at Grand Junction's Marriott Courtyard this morning to go over the good,the bad, and how the future is shaping up for Coloradans.
COLORADO STATE・6 DAYS AGO
KREX

Lawmakers question IRS treatment of taxpayers based on income

Lawmakers want the IRS to treat all Americans fairly and equitably, but fear the tax system is split into two tiers.
CONGRESS & COURTS・5 DAYS AGO
KREX