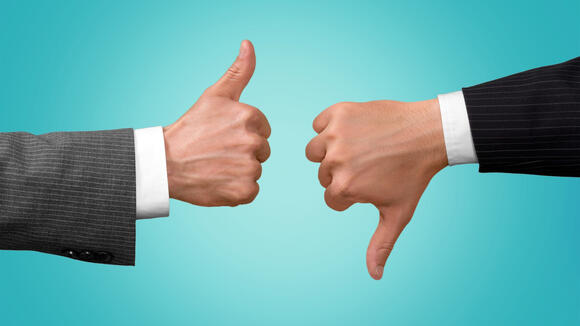 The futures were down across the board as we close out the holiday-shortened trading week, one that most are ready to see come to an end. The markets tried for yet another snapback rally on Thursday, but that faded in the final hour of trading, with all the major indexes, including the badly damaged Russell, posting losses yet again. Most across Wall Street chalked up the early buying to the market being very oversold, as the Nasdaq actually has slipped into correction territory, and it went even deeper by the close. Treasury yields were up across the curve, as the sellers returned Thursday.

Many on Wall Street continue to focus on the big increases in energy and food costs and the other spiraling inflation issues. While strategists and economists are divided on when the current inflation surge will ease, the ongoing supply chain concerns and stagflation worries remain front and center, and they will until the price increases start to decline.

24/7 Wall St. reviews dozens of analyst research reports each day of the week with a goal of finding fresh ideas for investors and traders alike. Some of these daily analyst calls cover stocks to buy. Other calls cover stocks to sell or avoid. Remember that no single analyst call should ever be used as a basis to buy or sell a stock. Consensus analyst target data is from Refinitiv.

These are the top analyst upgrades, downgrades and initiations seen on Friday, January 21, 2022.

Ashland Global Holdings Inc. ( NYSE: ASH ): Wells Fargo downgraded the stock to Equal Weight from Overweight and dropped the target price to $110 from $120. The consensus target is $124. The final trade on Thursday was reported at $98.09.

Beyond Meat Inc. ( NASDAQ: BYND ): HSBC Securities raised the Reduce rating on plant-based food stock to Hold with a $62 target price. The consensus target is $72.43. The final trade Thursday was reported at $61.42.

Carvana Co. ( NYSE: CVNA ): KeyBanc Capital Markets downgraded the stock to Sector Weight from Overweight. Over the past year, the shares have traded between $147.67 and $376.83, and they have a $356.73 consensus price objective. The closing share price on Thursday was $157.99.
ALSO READ: 5 of the Highest Dividend-Paying S&P 500 Companies Are Also Outstanding 2022 Stock Picks
C.H. Robinson Worldwide Inc. ( NASDAQ: CHRW ): BofA Securities upgraded the stock to Buy from Neutral and raised the $108 price objective to $125. The consensus target is $107.35. The stock ended Thursday’s session at $105.04.

Embraer S.A. ( NYSE: ERJ ): Morgan Stanley upgraded the stock to Overweight from Equal Weight and moved the target price to $23 from $20. The consensus target for the South American defense and aerospace giant is $22.27. The stock closed on Thursday at $15.39.

Evoqua Water Technologies Corp. ( NYSE: AQUA ) Oppenheimer upgraded the shares to Outperform from Perform and has a $45 price objective. The consensus target is higher at $49.78. The closing share price on Thursday of $39.18 was over 4% higher for the day.

Holly Energy Partners L.P. ( NYSE: HEP ): Barclays downgraded the shares to Underweight from Equal Weight and trimmed the price target to $17 from $20. The consensus price target is $20.67. The stock closed at $17.77 on Thursday.

Moderna Inc. ( NASDAQ: MRNA ): BofA Securities raised its Underperform rating on the vaccine maker to Neutral and lifted the target price to $180 from $135. The consensus target is much higher at $284.26. The stock closed Thursday at $167.52, which was down almost 4%  for the day.

Paramount Group Inc. (NYSE: PGRE): Though Mizuho upgraded the stock to Buy from Neutral, it trimmed the target price to $10.50 from $11. The consensus target is $9.93. The stock closed on Thursday at $8.84.
ALSO READ: Goldman Sachs Sees Double-Digit 2022 Upside for Red-Hot Big Dividend Energy MLPs
Paysafe Ltd. ( NASDAQ: PSFE ): Cowen upgraded the stock from Market Perform to Outperform with a $7 price target. The consensus target is $6.39. The last trade for Thursday came in at $3.61.

Pear Therapeutics Inc. (NASDAQ: PEAR): Credit Suisse started coverage with an Outperform rating and an $11 price target. The consensus target is $13.50. The stock closed trading on Thursday at $4.41.

Peloton Interactive Inc. ( NASDAQ: PTON ): Stifel upgraded the stock to Buy from Hold, but it also cut its $56 target price to $40. The consensus target for the popular home exercise equipment stock is $67.69. The stock closed Thursday at $24.22, down almost 24% on the day after rumors surfaced that it would halt production, which the CEO of the company has denied. Shares were up almost 7% in the premarket.

PetMed Express Inc. (NASDAQ: PETS): Sidoti upgraded the stock to Buy from Neutral and has a $32 price target. The consensus target is lower at $28.50. The stock ended trading on Thursday at $23.81.
Photronics Inc. (NASDAQ: PLAB): Zacks named this as the Bull of the Day stock. The analyst wonders if there could be a buyout ahead for this stock that has seen solid growth and rising margins. The stock most recently closed at $17.36 and has a consensus price target of $20.67, which would be a 52-week high.

PulteGroup Inc. ( NYSE: PHM ): UBS started coverage of the homebuilder with a Neutral rating and a $63 price target. The consensus target is $65.92. The last trade on Thursday was recorded at $52.37.

Sealed Air Corp. ( NYSE: SEE ): Morgan Stanley upgraded the stock to Overweight from Equal Weight and lifted the price target to $79 from $61. The consensus target is $68.93. The final trade on Thursday was reported at $68.10.

VICI Properties Inc. ( NYSE: VICI ): Berenberg started coverage on the casino properties real estate investment trust with a Buy rating and a $35 price target. The consensus target is $36.13. The last trade on Thursday hit the tape at $27.57.

Vroom Inc. ( NASDAQ: VRM ): KeyBanc Capital Markets upgraded the stock to Overweight from Sector Weight and has a $13 price target. That compares with a much higher $28.64 consensus and Thursday’s closing print of $7.70, which was up almost 5% for the day.

W.P. Carey Inc. ( NYSE: WPC ): BofA Securities downgraded the real estate giant to Underperform from Neutral. The shares have traded in a 52-week range of $65.75 to $83.19 and have a consensus price target of $86.38. The stock closed on Thursday at $75.84.
ALSO READ: JP Morgan’s 6 Best 2022 Picks in Alt/Solar Energy
Five of the S&P 500 components with the highest dividends , including three in the red-hot energy sector, look like great ideas for income-oriented investors looking for stocks with upside appreciation this year.

See why three top analysts expect big things from Microsoft ahead of earnings. And another key analyst now has six top picks in the solar and alternative energy space.

These seven dividend-paying tech sector leaders have been caught up in the "sell everything and head for the hills" hysteria. They are trading at bargain-basement prices now and will flourish long after the current bear market has passed.
STOCKS・1 DAY AGO
24/7 Wall St.

Here is a look at what to expect when three tech high-flyers report results after markets close on Wednesday.
STOCKS・14 HOURS AGO
24/7 Wall St.

Lowe’s and Medtronic are among the top companies expected to lift the dividends they pay to shareholders this week, making their stocks good total return candidates.
STOCKS・1 DAY AGO
24/7 Wall St.

The microchip shortage that has battered the industry prompted Toyota to say it will cut global manufacturing.
ECONOMY・14 HOURS AGO
Reuters

BENGALURU (Reuters) - Indian shares rose on Wednesday, after declining for two straight sessions, as banking stocks jumped amid strength in broader Asian equities, although the gains were capped by losses in the technology sector. The NSE Nifty 50 index was up 0.50% at 16,205.30 by 0353 GMT, while the...
STOCKS・11 MINUTES AGO
24/7 Wall St.

These seven real estate investment trust leaders not only offer investors steady growth and substantial dependable income. They also offer the best entry points in well over a year, making them great ideas for weary investors looking for a safe space.
MARKETS・16 HOURS AGO

Click here to read the full article. Shekar Natarajan’s logistical revolution at Quiet Platforms is gathering steam, bringing sports-focused merchant Fanatics on board as it takes on the shipping giants with a new approach. Quiet, which is a subsidiary of American Eagle Outfitters Inc., will help Fanatics serve up same-day and next-day delivery to consumers. More from WWDThe Fashion in 'The Marvelous Mrs. Maisel' Season FourAmazon Prime Day 2020: Fashion and Beauty Deals to Check OutWalmart and Target figure out how to fight back at Amazon The logistics company uses a collaborative model, pooling the orders of brands that use its platform to...
RETAIL・26 MINUTES AGO
WWD

Click here to read the full article. Rael, the feminine care brand based on Korean technology, has closed a $35 million series B funding round. Colopl Next led the round and Signite Partners also contributed.More from WWDArt-Inspired Makeup Looks by Mimi ChoiPhotos of the Beauty Transformation in 'Pam & Tommy'Abse-èl RTW Spring 2022 The brand initially started focusing on feminine care and sexual wellness, but has expanded into adjacent categories covering skin care and body care. “We want to take women through the entire hormonal cycle for four weeks,” said Yanghee Paik, cofounder and chief executive officer of Rael. Paik said the brand...
BUSINESS・26 MINUTES AGO
WWD

Could Peer-to-Peer Returns Be the Answer to Fashion’s Returns Problem?

Click here to read the full article. Zara canceling its free return policy made headlines, but wasteful returns are a perpetual problem in retail that can’t be remedied by any one retailer. However, the customer may have a workable solution: peer-to-peer returns. Peer-to-peer return models connect returned product with shoppers still hoping to score something they missed, and aim to curtail waste.More from WWDStitch Fix MenCannes Film Festival: Emilia Schüle, Matthew Postlethwaite Attend Ralph Lauren LunchInside the Spring Garden Party at Frick Madison In the U.K. alone, returns cost retailers roughly 7 billion pounds annually. According to shipping provider Pitney Bowes’ BoxPoll...
RETAIL・26 MINUTES AGO
24/7 Wall St.