There's probably no other topic garnering more attention right now than inflation. In categories ranging from used cars to housing and gas to food, soaring prices are everywhere. And these increases are hurting many consumers, particularly those at the lower end of the socioeconomic spectrum.

There's no doubt that the unexpected surge in consumer demand following the pandemic, at a time when supply chains were not functioning at full capacity, probably is the main culprit of the current situation. Investors are likely wondering what the best course of action is in order to benefit from this trend.

If you're worried about the threat of inflation , there's a worthwhile asset to allocate a small percentage of your portfolio to: Bitcoin (CRYPTO: BTC) . 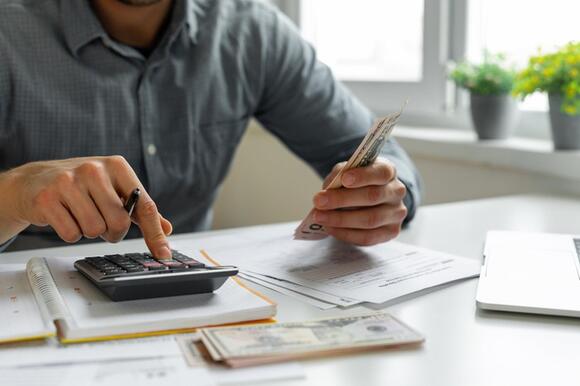 Why is inflation necessary?

It's worth taking a step back to understand why inflation exists. The constant devaluing of currency is a policy tool used to encourage consumers to spend. In a deflationary environment, on the other hand, consumers would just wait to buy goods and services because they expect prices to go down over time.

Deflation can lead to lower sales and profits for companies, which would cause employee layoffs, decreasing consumer spending, and ultimately a shrinking economy. Obviously, this scenario should be avoided, so a minimal amount of inflation is used to spur growth. In the U.S., the Federal Reserve targets an annual inflation rate of 2% over the long term, a figure monetary policy makers believe leads to a healthy economy.

In response to the coronavirus pandemic, the Fed pumped an unprecedented amount of money into the economy to quickly get the country out of a recession. Other major economies, including the European Union and Japan, reacted in a similar way. The result is the inflation that we're seeing right now.

What if there was an asset out there that allowed investors to essentially sell short all the massive money printing happening across the globe? Luckily, there is.

Bitcoin is an excellent investment, especially since owning it means betting against the world's fiat currencies. This is because the amount of Bitcoin in circulation will decrease relative to every other currency out there. There will only ever be 21 million Bitcoin mined, and it's etched in the blockchain's code, so no one can tamper with it.

The M2 money supply, which is all money held in checking and savings accounts in the U.S., jumped significantly in the spring of 2020, and it has risen a lot since then. Based purely on this dynamic, where there will simply be a perpetually growing amount of dollars relative to the fixed supply of Bitcoin, the crypto's value should appreciate as time passes.

When you view Bitcoin in this light, it's easy to see why proponents of the world's most valuable cryptocurrency are so supportive of it. Institutions are also beginning to view Bitcoin as a legitimate store of value. There are Bitcoin exchange-traded funds on the market. And large corporations like Block (formerly Square), MicroStrategy , and Tesla are allocating portions of their balance sheets to Bitcoin and away from cash. I expect this trend to continue.

If an individual not only maintains but increases their purchasing power over time by owning a particular asset, that asset is a solid place to invest if inflation is high. How has Bitcoin performed in this regard? The world's most valuable cryptocurrency has skyrocketed 39,000% in value from May 2013 (the earliest data provided by Coin Market Cap) to Jan. 20, trouncing any other financial asset's performance during this period. Meanwhile, inflation, as measured by the consumer price index, has increased 23.3% over the past decade.

Clearly, there hasn't been a better investment to own in general, let alone if you're worried about inflation, than Bitcoin. Although the volatility is difficult for most people to stomach, I think it makes sense to allocate 1% of your portfolio to Bitcoin.

Warren Buffett's approach could keep your money safer amid volatility.
STOCKS・16 HOURS AGO
The Motley Fool

With a solid foundation and a decent plan in place, it gets much easier to make the right decisions for your long-term financial health.
STOCKS・2 DAYS AGO

Known more for its income, this company has lots of room to continue expanding.
STOCKS・1 DAY AGO
The US Sun

MILLIONS of Americans are set to receive Social Security checks worth up to $1,657 tomorrow. The cash boost will come just 48 hours before Supplemental Security Income payments, worth up to $841, are set to land in around eight million bank accounts on April 29. Seniors with birthdays on the...
BUSINESS・24 DAYS AGO
Business Insider

A member of a superyacht crew also told The Times of London that one owner had his bar stools made from whale foreskin.
BOATS & WATERCRAFTS・26 DAYS AGO
Markets Insider

The company's founder is wealthier than Buffett himself.
STOCKS・1 DAY AGO
ohmymag.co.uk

Blackout and crisis preparedness expert Herbert Saurugg has recently warned against the complete power grid blackout that could plunge entire Europe into darkness. He predicts a widespread blackout could be lurking in the not too distant future and such an event can cause extremely chaotic conditions worldwide. However, those who are prepared for an emergency can definitely bridge the difficult days well.
ENERGY INDUSTRY・25 DAYS AGO
The Motley Fool

These stocks offer a reasonable valuation and positive returns in a challenging market.
STOCKS・2 DAYS AGO
electrek.co

As part of a lawsuit between shareholders and Elon Musk regarding his “funding secured” tweet, new text messages and emails between Musk and people involved have been released. The communications pretty much confirmed how most people saw the situation: Elon Musk took a meeting with the head of...
BUSINESS・25 DAYS AGO
The Motley Fool

You don't want to be caught unprepared.
BUSINESS・1 DAY AGO
The Motley Fool

Are you on track to earn the $4,194 max benefit amount?
BUSINESS・2 DAYS AGO
The Motley Fool

Strong price performance from these three large-cap tokens has investors excited about the near-term prospects of this sector.
STOCKS・13 HOURS AGO
The Motley Fool