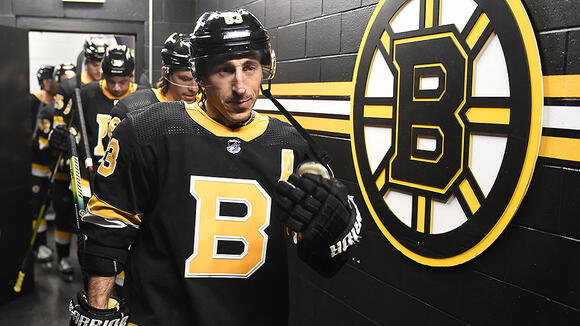 BOSTON (CBS) — Brad Marchand is a man of the people — and one funny guy. The Bruins forward had some fun with a Boston fan ahead of Thursday night’s game against the Capitals, in a way that only Brad Marchand could.

As he made his way off the ice following pregame warmups, Marchand started giving out his usual high-fives and fist bumps to the fans there to greet him. One young fan was recording it on his phone, which is when Marchand decided to have his fun.

He snagged the phone as he walked through the tunnel and recorded a rather hilarious message for the young fan.

“What’s up! It’s B-M 6-3, just walking off from warmups. I don’t know whose phone this is, but I hope you have a lot of fun tonight because I know I’m going to,” Marchand said in the video. “Anyways, gotta go. See ya.”

Marchand may be disliked around the league, but any fanbase would welcome him with open arms because of things like this. He loves interacting with Boston fans, and is always looking for ways to make the gameday experience unique.

Thursday night’s video message certainly fits that bill. The phone belonged to a young fan named Aiden Smith, according to NESN. Not only was Smith treated to a thrilling 4-3 Bruins win, but he now has a priceless memory from Marchand.

Unfortunately for Marchand and the Bruins, the forward had to leave the game in the second period with a shoulder injury on what head coach Bruce Cassidy called a “cheap hit” by Washington’s Garnet Hathaway.

BOSTON -- If you've been able to follow along with every injury update during the Eastern Conference finals, then congratulations are in order. The series has had more twists and turns than an M. Night Shyamalan screenplay ... and they've only played three games. It's no surprise, then, that as the Boston Celtics prepare to host the Miami Heat for Game 4, the injury report for both teams looks like a beautiful, chaotic mess. As of Monday morning, the Celtics' injury report looks like this: Sam Hauser (shoulder) - OUT Marcus Smart (ankle) - QUESTIONABLE Jayson Tatum (nerve impingement) -...
BOSTON, MA・1 HOUR AGO
CBS Boston

BOSTON -- With five straight victories and wins in nine of their last 12 games, the Red Sox finally have something to feel good about. They decided on Sunday to spread those good vibes with the Boston Celtics.On their way out of Fenway Park following their walk-off win to complete a four-game sweep of the Mariners, the Celtics were decked out -- in head to toe, in some cases -- in Boston Celtics gear.Franchy Cordero, who hit the walk-off grand slam with two outs in the bottom of the 10th inning, was representing Marcus Smart, as was Trevor Story. Smart took notice of both players wearing his jersey and shared his appreciation on Twitter:Tanner Houck wore the full uniform, shorts and all, to represent Jayson Tatum, a jersey which was a popular choice among Red Sox players:The Celtics will host the Miami Heat in Game 4 in Boston on Monday night, looking to even the series at two games apiece. The Red Sox will be in Chicago, but they made sure to lend their support before heading out of town.
BOSTON, MA・42 MINUTES AGO
CBS Boston

BOSTON -- Nobody was better than Jimmy Butler in the opening game of the Eastern Conference finals between the Boston Celtics and Miami Heat. Game 2 ... was a different story.Two nights after dropping 41 points while pulling down nine rebounds, dishing out five assists, blocking three shots, and recording four steals, Butler's Game 2 performance could better be filed under "good, not great." He scored 29 points, with the rebounds dropping to six, the assists dropping to three, the steals dropping to one, and the blocks dropping to zero.It wasn't a bad game, but it wasn't the superstar-level performance...
BOSTON, MA・2 DAYS AGO
CBS Boston

Celtics' Robert Williams ruled out for Game 3 with knee soreness

BOSTON -- The Celtics won't have center Robert Williams for Saturday night's Game 3 of the Eastern Conference Finals against the Miami Heat. Williams has been ruled out for Saturday's tilt as he deals with left knee soreness.Williams popped up on the Celtics' injury report Saturday afternoon and was listed as questionable for the game. ESPN's Adrian Wojnarowski reported shortly before Ime Udoka chatted with reporters that Williams was out, but Udoka said Williams was going to be checked out one final time before a determination was made."He had some soreness and swelling that popped up. Got it checked out this...
BOSTON, MA・1 DAY AGO

BOSTON -- Tom Brady hasn't been in Boston for a long time. But a part of the city remains with him.We're talking, of course, about the Boston accent.While Brady never quite got to the point where he was dropping his R's and spewing curses every fifth word, he was obviously surrounded by the distinct eastern Massachusetts dialect for roughly half of his life.Now long gone in Tampa, Brady reflected on those days of being around the Boston accent in his latest ad for Hertz, which he shared on Twitter on Friday.Sitting next to comedian and actual New Englander Alyssa Limperis, Brady can't help but smile while letting out a number of hearty "Bah-stins."Before the ad ends, Brady slips in a "wicked pissah" for good measure.It's not the first time Brady and the Boston accent have been paired for comedic purposes, as Brady's accent was the subject of a Funny or Die video way back in 2014.
BOSTON, MA・2 DAYS AGO
CBS Boston

BOSTON -- Not a lot went right for the Celtics in Game 3 of the Eastern Conference Finals, and most of it was their own doing. A slow start and turnovers doomed Boston on Saturday night, and now momentum is back with the Miami Heat in the Eastern Conference Finals. Boston turned the ball over 24 times -- at home -- leading to 33 Miami points, and the Heat won Game 3, 109-103. Miami led the contest from start to finish and led by 26 at one point. The Celtics made it a one-point game late in the fourth quarter, but...
MIAMI, FL・1 DAY AGO