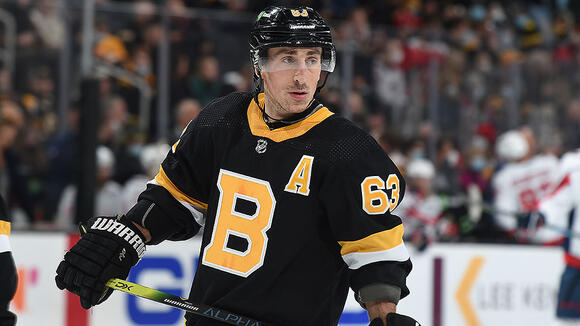 BOSTON (CBS) — The Bruins earned a spirited 4-3 win over the Washington Capitals on Thursday night, but it may have come at a cost. Brad Marchand had to leave the game in the second period after taking a hit from behind by Washington’s Garnet Hathaway, which head coach Bruce Cassidy called a “cheap hit.”

Marchand suffered an upper-body injury on the play, which occurred a little more than halfway through the second period. The Bruins winger went into the corner to play the puck, and Hathaway lined him up and delivered a crushing blow right between the numbers, sending Marchand hard into the boards.

Marchand immediately went to the locker room and though he later returned to the bench, he eventually went back to the room for good. He was ruled out before the third period began.

Losing Marchand left Boston with just 10 forwards, as the B’s also lost Anton Blidh on a hit earlier in the game. Cassidy didn’t have any issue with the hit that knocked Blidh out of the game, but was really displeased with Hathaway’s hit from behind on Marchand.

“The [Marchand] one I didn’t like at all. The officials right there in front of it didn’t call it; the guy trailing it called it. He hit a guy in the numbers in a vulnerable spot,” Cassidy told reporters after the win. “I’ve seen that from that player in the past, so I didn’t like that one at all. The league may or may not look at it. When it comes to Marchy, sometimes they kind of move on. But in this particular case, seems like a vulnerable spot, against the boards, back high.”

Hathaway was hit with a two-minute minor for interference, but should have received a five-minute major for a clear hit from behind. He may be facing supplemental discipline from the league, which should come out on Friday.

While Cassidy wasn’t happy that the Bruins lost their leading scorer, he was pleased with the resolve that the team showed the rest of the way.

“At the end of the day we were able to overcome it. Other guys got an opportunity to step up,” he said. “Hopefully Marchy is OK. Tough job for the officials to call those quickly like that, but that one I didn’t particularly like.”

Marchand leads the Bruins in goals (20), assists (23) and points (43) this season. On Friday, Cassidy said that both Marchand and Blidh are out for Saturday’s game against the Jets at TD Garden.

BOSTON -- If you've been able to follow along with every injury update during the Eastern Conference finals, then congratulations are in order. The series has had more twists and turns than an M. Night Shyamalan screenplay ... and they've only played three games. It's no surprise, then, that as the Boston Celtics prepare to host the Miami Heat for Game 4, the injury report for both teams looks like a beautiful, chaotic mess. As of Monday morning, the Celtics' injury report looks like this: Sam Hauser (shoulder) - OUT Marcus Smart (ankle) - QUESTIONABLE Jayson Tatum (nerve impingement) -...
BOSTON, MA・1 HOUR AGO
Yardbarker

Celts should cover, even series with Heat

It's a new week here at Bark Bets, and the postseason remains center-stage for tonight's action. We have a trio of Game 4s to enjoy. Two teams have a chance to tie the series at two, while the two-time defending champs can wrap up a commanding sweep and advance to the next round.
MIAMI, FL・20 MINUTES AGO
CBS Boston

Jayson Tatum vows to be better after rough Game 3 showing

BOSTON -- Jayson Tatum hasn't had many bad nights this postseason. But when the Celtics star is off, he is really off.Tatum was nowhere near his superstar self Saturday night at TD Garden, hitting just three of his 14 shots and scoring only 10 points in Boston's 109-103 loss to the Miami Heat in Game 3 of the Eastern Conference Finals.While the Heat hit just about everything to start the game, Tatum couldn't get anything going. He missed both of his shots in the first quarter and put up a goose egg for the frame, as Miami raced out to a...
BOSTON, MA・1 DAY AGO