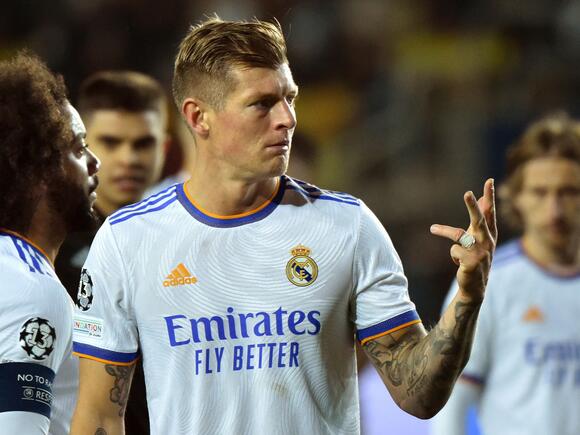 Real Madrid star Toni Kroos was left stunned and confused when he received a yellow card for a ghost tackle during the club’s Copa del Rey victory over Elche .

Kroos went in for a challenge but didn’t connect with the ball or forward Tete Morente but the player threw himself to the floor and referee Jorge Figueroa Vazquez gave a free kick.

The former German international protested the call which earned him the yellow card and posted on Twitter afterwards to sum up his displeasure at the decision. Despite the controversial decision, Carlo Ancelotti ’s side came from behind to win the last 16 match.

The full-time score stood at 0-0 which triggered extra time; Elche went ahead through Gonzalo Verdu and Real went down to 10 following Marcelo’s red card. But the Spanish giants fought back with Isco and Eden Hazard scoring to put the club through.

The Real manager shared his joy at his team’s resilience in his post-match press conference. He said: “This is the match that has made me happiest from this part of the season.

“I warned the players that it could be a long match and that we had to be ready for everything, for mistakes, for conceding a goal, for extra time. This is an extraordinary squad. They fight until the end. They have character.”

And he added about the scoring substitutes: “Hazard and Isco won this match for us. Sometimes they’ve deserved to play more. They’re very professional. [Keeping them motivated] is about maintaining good relationships, as people not just as footballers.”

Manchester City legend Georgia Stanway has joined Bayern Munich, it has been confirmed.Stanway, who has 31 caps for England, made her senior debut for the club at 16 and has gone onto become the club’s top scorer. The midfielder has slotted 57 goals in 165 appearances but she will now step away from the Women’s Super League club.“I joined Manchester City with a dream of becoming a professional footballer,” she said. “I have been grateful to call it my home for the past seven years.“Today, I leave as the club’s leading scorer, with over 150 appearances and seven domestic trophies....
WORLD・3 HOURS AGO