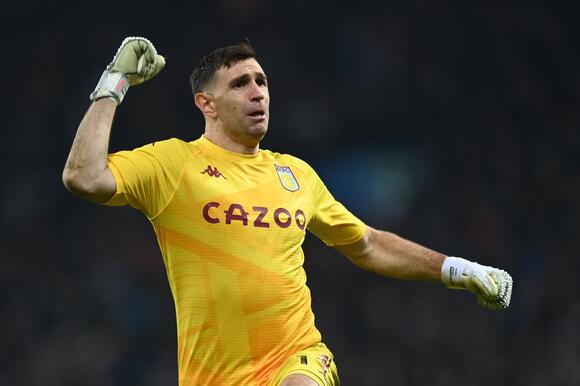 Aston Villa ’s No. 1 goalkeeper Emiliano Martinez has signed a contract extension to remain at the Premier League club until 2027.

The Argentina international joined the side ahead of the 2020/21 season from Arsenal and has been impressive for Steven Gerrard ’s team. In his first season he equalled the record for most clean sheets in a campaign with 15 to his name.

He only made his international debut in June but was named as the favoured keeper for the Copa America final where he lifted the trophy. Martinez has gained respect across the footballing world and has received high praise from Lionel Messi.

The Argentine legend said: “Martinez is crucial. When opponents come to him, he always responds. He established himself in goal and we have one of the best goalkeepers in the world.”

The extension is the second Villa have announced in as many days as Kortney Hause re-signed until 2025 on Thursday . Hause said it’s an “exciting” time for the club, especially with Gerrard now in charge.

“I’m over the moon,” he told VillaTV. “It’s a big club, a big part of my life, big part of my football career. Since the day I signed, I’ve felt a real love for the club in terms of showing how much they wanted to bring me to the club.

“So from the first day I signed, I’ve felt loved and wanted and to extend for another three-and-a-half years…I’m very, very happy, I’m delighted.

The club are currently 13th in the league and 13 points outside of the top five.

Minute-by-minute report: Will Real Madrid win their 14th European Cup, or can Liverpool make it seven? Join Rob Smyth for all the latest from Paris
PREMIER LEAGUE・18 MINUTES AGO
The Independent

Jonathan Hogg: Huddersfield better equipped for Premier League than in 2017

Huddersfield captain Jonathan Hogg believes the club is better equipped for the Premier League than it was under former boss David Wagner.The Terriers crashed out of the top flight after two seasons in 2019 and can return with victory against Nottingham Forest in Sunday’s Sky Bet Championship play-off final.Hogg, 33, the only remaining player from Wagner’s class of 2017, said: “As a squad I think we are better equipped, but we’ve got to get there first.“Maybe as individuals we don’t have the quality of (Aaron) Mooy and (Philip) Billing and people like that, but that togetherness we’ve got is special....
PREMIER LEAGUE・4 HOURS AGO
The Independent

There are big screens across the city, every hotel room is booked out, and, down at Jurgeon’s Bierhaus, it’s already approaching standing room only.This is Liverpool city centre hours before Saturday night’s Champions League Final.The Reds are aiming to win their seventh European Cup when they take on Real Madrid in Paris.And, while more than 100,000 fans are estimated to have travelled to the French capital, Liverpool itself is both buzzing with excitement and preparing for a huge economic boon on the back of the big game.“We can’t wait, mate,” said an already under-the-cosh bar staffer at Jurgeon’s, a German...
PREMIER LEAGUE・4 HOURS AGO
The Independent

Liverpool fans flood into Paris ahead of Real Madrid showdown

Tens of thousands of Liverpool fans have sung “You’ll Never Walk Alone” in Paris ahead of the Champions League final.The Reds will take on 13-time winners Real Madrid at the Stade de France, just north of the city, on Saturday evening.A huge sea of red shirts surrounded the Cours de Vincennes area in the south-east area of the city during the morning, where a fan zone has been set up.As many as 50,000 supporters, largely ticketless, began gathering early during the day, some starting the drinking from 7am, bringing traffic in the area to a standstill as roads were closed...
PREMIER LEAGUE・4 HOURS AGO

Coach carrying Liverpool fans for £1 each arrives in French capital

A coach bought by a Liverpool supporter to transport dozens of fellow fans to Paris for just £1 each has arrived in the city ahead of the Champions League final.The Reds will take on 13-time winners Real Madrid at the Stade de France on Saturday, with many fans facing huge fees to get to the city.Simon Wilson, a British vlogger, from Wrexham, bought the cheapest coach he could find for £5,000 to take as many fans there to avoid the “extortionate” travel fees.Just £1 each meant around 50 supporters could go from Anfield to the French capital in time for...
PREMIER LEAGUE・4 HOURS AGO
The Independent

A group of Liverpool fans have travelled to France in a speedboat to watch their team battle Real Madrid in the Champions League final after their Easyjets flights were cancelled.As many Reds were hit by travel chaos amid a wave of Easyjet cancellations, a group of a dozen fans resorted to making their own way across the Channel from Jersey to Saint Malo on Friday. Footage showed the men approaching the French coast in blustery conditions, blasting Billy Joel’s “We Didn’t Start the Fire”, as one on the boat remarked: “We must be off our f****** heads.”Paddy O’Toole, who lives...
SPORTS・3 HOURS AGO
The Independent

A Liverpool fan was “devastated” when his flight to France for the Champions League final was cancelled, leaving him in “limbo” at an airport for six hours.Keenan Downey and his father Leslie arrived at Liverpool John Lennon Airport at 1.30am on Saturday, hoping to catch a 4am flight to Paris.However, they were among scores of fans who faced lengthy delays after a flight cancellation.Mr Downey, 25, who travelled from Anglesey, Wales, says the flight was rescheduled to depart at 5.45am but was cancelled.He was then told there was no flights left at 3.30am, leaving him “stood around helpless”, before he finally...
SPORTS・3 HOURS AGO