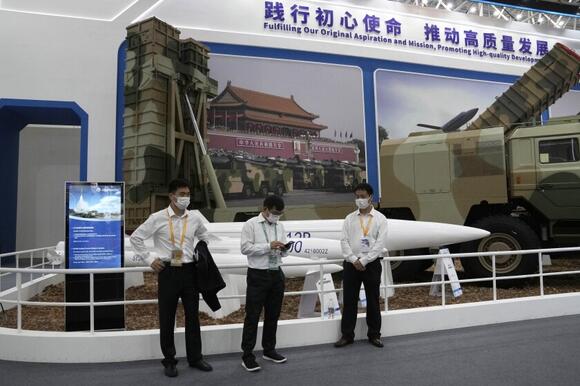 The United States announced penalties on three companies it said were engaged in unspecified “missile technology proliferation activities." It said they were barred from U.S. markets and from obtaining technology that can be used to make weapons.

China accounted for about 5% of global weapons exports in 2016-20, according to the Stockholm International Peace Research Institute. The United States was the top global exporter, accounting for 37% of the total in 2016-20.

Cruise missiles and long-range ballistic missiles are regarded as among China's strengths in weapons technology.

A top US official in the Pacific has warned that America would have to “respond” if the Solomon Islands allows China to establish a military base there.Following a “constructive and candid” 90-minute meeting with prime minister Manasseh Sogavare, ambassador Daniel Kritenbrink said that the security deals between China and the Solomon Islands present “potential regional security implications” for the US and other allies.“We wanted to outline for our friends in the Solomons what our concerns are,” Mr Kritenbrink, US assistant secretary for East Asian and Pacific Affairs, told reporters.“We have respect for the Solomon Islands’ sovereignty. But we also...
FOREIGN POLICY・29 DAYS AGO
Business Insider

A plethora of downright bizarre scientific research from the Department of Defense previously kept under wraps has been uncovered, revealing an array of peculiar schemes proposed by the United States military. One outlandish proposal suggested detonating nuclear bombs on the moon to create a tunnel through it. Millions in taxpayer dollars were spent on the research, which appears to have relied on a contractor, Bigelow Aerospace Advanced Studies, which was owned by multi-millionaire Robert Bigelow, a hotel impresario. The public was kept in the dark until now regarding what research was being funded.
ASTRONOMY・28 DAYS AGO

Vladimir Putin is so popular in Russia that he has the “political space” to withdraw his forces from Ukraine, said Boris Johnson.The prime minister said the Russian president still has “massive backing” from his own people despite international outrage over the invasion.“The Russian public overwhelming back Putin,” Mr Johnson told Talk TV. “Therefore he has the political margin for manoeuvre from within Russia … Putin has far more political space to back down, to withdraw.”The PM added: “There could come a point when he could say to the Russian people, ‘The military-technical operation that we launched in Ukraine has...
POLITICS・28 DAYS AGO
Fortune

Sign up for the Fortune Features email list so you don’t miss our biggest features, exclusive interviews, and investigations. Reports that Twitter’s board could come to a deal with Elon Musk as early as Monday are raising red flags among media watchdog groups. On Monday, Media Matters, a...
PRESIDENTIAL ELECTION・29 DAYS AGO

The intelligence the U.S. shared with Ukraine helped it continue to resist Russian invading forces and even shoot down a transport plane carrying hundreds of Russian troops, a new report revealed. According to current and former U.S. officials who spoke with NBC News on Tuesday, the U.S. provided critical intelligence...
MILITARY・28 DAYS AGO
Insider

Expectant mothers in quarantine are only given two painkiller pills a day — the same treatment given to all COVID-19 patients, sources told RFA.
PUBLIC HEALTH・1 DAY AGO
Fortune

Sign up for the Fortune Features email list so you don’t miss our biggest features, exclusive interviews, and investigations. Shanghai’s 25 million residents have endured an extreme COVID lockdown for nearly a month—and now a new nightmarish topic is trending on Weibo, the country’s Twitter-like social media platform.
PUBLIC HEALTH・29 DAYS AGO
Vice

A dangerous mix of increasing international conflict, global climate change, and a lack of governmental efforts to fix either could be leading the world to an era of unprecedented destruction. That’s the thrust of a new report from Stockholm International Peace Institute (SIPRI), a European think tank focused on peace.
FOOD & DRINKS・1 DAY AGO

Last Monday, Malcolm Nance, an MSNBC talking head and former sailor in the United States Navy, showed up on the channel by satellite from Ukraine, dressed to kill. He wielded an assault rifle and wore full-camo military dress, including a ballistic helmet, and U.S. and Ukrainian flag patches. About a month ago, he said, he decided he was “done talking.” He then talked about how he had joined Ukraine’s international legion to help the country “fight [against Russia’s] war of extermination—an existential war.” Others have traced a similar journey. Andy Milburn, a journalist and ex-Marine who stopped writing and began training Ukrainians for combat, wrote an article about how he, too, was finished writing articles about Ukraine. “It just started to seem so frivolous,” he wrote, solemnly. “I didn’t want to be an observer.”
MILITARY・29 DAYS AGO
Business Insider

The former F-35 test pilot Billie Flynn told The Aviationist that moving to the "cosmic spaceship" that is the F-35 was too much to ask of MiG pilots.
AEROSPACE & DEFENSE・29 DAYS AGO
US News and World Report

An investigation said the sub's leaders "missed a significant opportunity for self-reflection and improvement" after the earlier incident.
CONNECTICUT STATE・22 HOURS AGO
97.1 FM Talk

In an interview with Russian TV, Sergei Lavrov said that Russia is essentially at war with NATO. This rhetoric has some worried that Russia may use nuclear weapons in Ukraine. Lt. Col. Dakota Wood weighed in on the likelihood of this happening.
POLITICS・28 DAYS AGO
Business Insider

From a first-person perspective, the videos show an anti-tank missile system being fired at Russia armored vehicles seen across a field.
MILITARY・28 DAYS AGO
Newsweek

Individual judges may not like the policy choices of the Biden administration, but it is not their job to weigh in on that policy debate.
TEXAS STATE・29 DAYS AGO
Reuters

Spain, Britain call on NATO to look at Russian threat from Africa

MADRID, May 25 (Reuters) - Russia's expanding influence and activity in Africa pose a "worrying" threat to the security of NATO countries along with its invasion of Ukraine and must be addressed by the military alliance, the Spanish and British defence ministers said Wednesday. At a joint news conference in...
POLITICS・17 MINUTES AGO