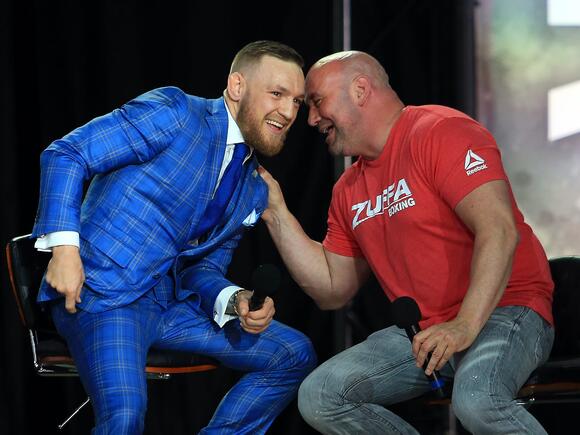 Conor McGregor could be ready to return to the Octagon and fight in the UFC this summer, boss Dana White said this week.

The UFC president told The Jim Rome Show that he'd spoken to the former two-weight UFC champ recently and was told the fighter would be "ready to roll this summer."

McGregor has not fought since suffering a broken leg in his second successive loss to Dustin Poirier at the T-Mobile Arena in Las Vegas in July last year.

After the defeat, McGregor delivered a wild, disturbing, and frenzied rant in the middle of the cage , and was taken to hospital for treatment on his broken bone.

The Nevada State Athletic Commission slapped him with a six-month medical suspension from fighting, which is standard practise, but White said at the time that he did not expect to see him return for an entire year .

Speaking more recently, White said that his calendar of events is filled until early May so it does not provide much leeway should McGregor want to return to pro fighting sooner.

However, he will speak to the 33-year-old in the coming weeks.

"We've got fights made right now up until May 2, so in the next three to four weeks I'll be giving him a call and seeing how he's feeling."

There will be great speculation as to who McGregor could fight in his highly-anticipated comeback, but during an annual segment called "The Odds Game" on the UFC's Canadian broadcast partner, TSN , White seemed to like the odds on Nate Diaz.

McGregor and Diaz have fought twice before. Diaz submitted McGregor with a rear-naked choke in their first bout in March 2016, before the Irishman rebounded with a decision win in the rematch that August. A third fight is required to decide the rivalry.

During the same segment, TSN reporter Aaron Bronsteter also asked White if he liked the odds on McGregor fighting twice or more in 2022, but the UFC boss seemed to think his star combatant would compete only once.

Ketlen Vieira kicked Holly Holm all over the Octagon as the Brazilian fighter earned a strong decision win Saturday at the UFC Apex.
LAS VEGAS, NV・2 DAYS AGO
Insider

Chidi Njokuani landed one of the nastiest elbows of the UFC's year so far when he knocked Dusko Todorovic out in the very first round.
LAS VEGAS, NV・2 DAYS AGO
Insider

A heavy-hitting middleweight scored the weekend's best KO, then challenged 2 Americans to a high-stakes fight

Janibek may have just announced himself as a new threat at middleweight as he scored the weekend's biggest knockout at a Las Vegas boxing show.
COMBAT SPORTS・1 DAY AGO
Insider

The former No. 1 pound-for-pound boxer apparently wanted to extend the duration of the boxing exhibition after it had already started.
COMBAT SPORTS・6 HOURS AGO

Atsamaz Tebloev is facing expulsion from the International Wrestling League of Poddubny, after throwing an illegal shot, a punch, at a rival in the middle of a match.
COMBAT SPORTS・9 HOURS AGO