How this mom changed her health by ditching the scale 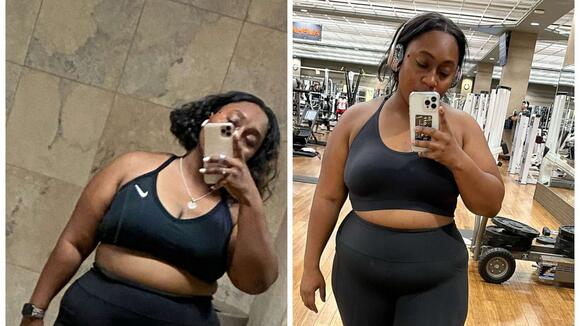 As people try to keep up with their New Year's resolutions , a mom from Chicago is sharing the hack she is using to reach her health goals.

Ryan Jurgenson, 29, said she has struggled with weight and body acceptance issues her entire life.

"My weight was always a topic of discussion," Jurgenson told " Good Morning America ." "I had a lot of curves at a young age and, in school, kids made fun of it."

After trying to lose weight year after year without success, Jurgenson said she changed her strategy.

Instead of focusing on her weight and the scale, Jurgenson said she began to focus on her goals, like having more energy to spend with her daughters, ages 1 and 7, and her 10-year-old stepdaughter.

"Not focusing on the scale has helped me to stick with this more long term because I'm not going to weigh myself every day for the rest of my life," she said. "I still want to enjoy life, so now it's not my end-all, be-all."

In addition to focusing on eating foods that make her feel good and fuel her body, Jurgenson began working out in a local gym, including lifting weights.

She said she soon noticed a non-scale victory, her clothes fitting her better, that she may not have seen had she focused solely on the scale.

"Going solely off weight is kind of depressing because you may be putting on a lot of muscle and the scale is going up and you're bummed because you gained weight," she said. "Really, you're doing exactly what you should be doing."

Instead of weighing herself every day for accountability, Jurgenson shares her wellness journey on Instagram.

She said she finds not only accountability but also support from her more than 10,000 followers.

More than one year into her new approach to her health, Jurgenson said she is also working towards another life-changing, non-scale victory -- switching careers.

Jurgenson, who currently works at a hospital, has started a second job at a gym in Chicago and hopes to transition into a full-time fitness career this year.

Here are three tips that Jurgenson found have worked for her, described in her own words.

"Mom guilt never goes away, at least not for me," said Jurgenson. "But one of the biggest lessons I've learned [as a mom] is that you're still a person when you're a mom, you're still you, so you have to make time to be your own person."

"When I first started going to the gym again, my family wasn't too happy about it, my daughters particularly, because it meant less time with them," she said. "But once they saw me going regularly and taking that time and noticing my non-scale victories, the biggest compliment I have gotten to date, and the most important one, was from my daughter Ava, who called me her new mom."

"For your child to see it and to love it and to understand it, that makes you a better person, and it makes you push more," she said. "But it also makes them want to be like you and do better for themselves. Now my daughter wants to go to the gym with me."

2. I think about my future self.

3. I focus on discipline over motivation.

"I stopped depending on motivation when I started getting to the days where I had been progressing and had been doing better, but I just didn't like doing it," said Jurgenson. "Then I would tell myself to remember the reasons why I started and the reasons why I keep going."

"Motivation is what gets you started. It's not what keeps you going," she said. "I have been focused on building discipline because discipline is one of the biggest factors in getting to where you want, and that's for any goal in life."

"Some of the non-scale victories that have helped me to become more disciplined are seeing my clothes fit better, having more energy throughout the day, getting compliments from my support system and being able to lift heavier at the gym," she said.

Parents of preemie describe their scramble to find baby formula

Mac and Emily Jaehnert are speaking out about the nationwide baby formula shortage and its impact on families of premature babies like theirs.
RICHLAND, WA・8 DAYS AGO
GMA

The danger of the 'strong Black woman' trope for mental health

Mothers across the U.S. have launched grassroots efforts to respond to the national baby formula shortage.
KENNEWICK, WA・3 DAYS AGO

Hannah Raleigh and Limia Ravart found out through DNA tests that they are sisters. The two women met in person for the first time on “Good Morning America.”
FAMILY RELATIONSHIPS・1 DAY AGO
GMA

John Osborne of Brothers Osborne opened up about what role music plays in helping him maintain his mental health.
MENTAL HEALTH・7 DAYS AGO
GMA

Billie Eilish on having Tourette's syndrome: 'I have made friends with it'

In a new interview, Billie Eilish, who said she was diagnosed with Tourette's syndrome at the age of 11, spoke about her tics and living with the disorder.
CELEBRITIES・2 DAYS AGO
GMA

CDC says one in five children and adolescents affected by childhood obesity, researchers observe a national shortage of physical activity.
KIDS・2 DAYS AGO

Teens fight book banning with their own banned book clubs

Gabriella and Julianna Ruvolo open up about their viral TikTok video, where they ask their stepmom to adopt them.
FAMILY RELATIONSHIPS・6 DAYS AGO