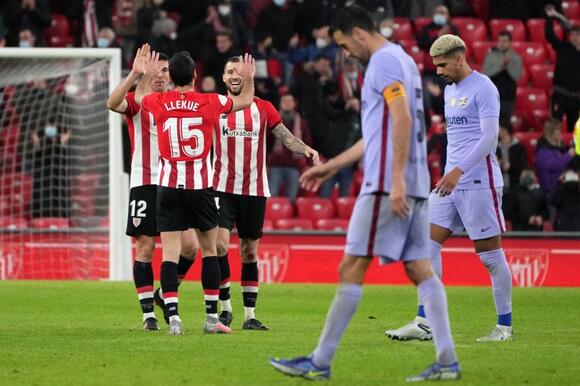 Former Manchester City forward Ferran Torres scored his first goal as a Barcelona player on Thursday night, but could not prevent his side being eliminated from the Copa del Rey .

The Catalan outfit are the reigning champions of Spain’s domestic cup competition, but the side they defeated in last season’s final, Athletic Club, had their revenge thanks to a 3-2 victory in extra time.

It had initially seemed as though the Basque side would progress in 90 minutes after a wild start and end to the match.

Iker Muniain netted just two minutes in, before Ferran’s equaliser midway through the first half - a fine curled effort into the far corner. Inigo Martinez scrambled home from close range just four minutes from full-time, after Gerard Pique inexplicably let the ball run across himself almost on the goal line, but Pedri came to Barcelona’s rescue with a fierce strike in stoppage-time after Dani Alves’ acrobatic assist.

That forced extra time, where Muniain again stepped up to score a penalty - given after a VAR review for a handball against Jordi Alba - and this time there was no way back for Xavi Hernandez’s side.

Earlier in the evening, Real Madrid were also taken to extra time and had to come from behind to beat Elche, with both teams seeing players sent-off.

Marcelo was dismissed for Los Blancos toward the end of the first period following a 90-minute stalemate, after a last-man foul. From the subsequent free-kick, initially blocked back out, Gonzalo Verdu fired Elche via a deflection off Dani Ceballos.

Another deflection levelled matters just after the restart, Ceballos’ shot bouncing in off Isco, before Eden Hazard scored his first goal of the season in any competition, rounding the onrushing ‘keeper to clip home with five minutes left.

There was still time for a contentious ending as Fidel rattled in a would-be equaliser, only to see it chalked off for an apparent foul by a team-mate in the build-up. All that came after former Southampton forward Guido Carrillo somehow contrived to hit the crossbar from just one yard out for Elche, mere minutes into the game.

Jurgen Klopp believes Mohamed Salah and Virgil van Dijk are on course to be ready for the Champions League final but will not gamble on his top scorer’s fitness on Sunday when Liverpool go for the Premier League title and the Egyptian could win the Golden Boot.Salah and Van Dijk both missed Tuesday’s 2-1 win over Southampton after coming off in the FA Cup final with groin and knee injuries respectively and they face a race against time to feature against Wolves at Anfield.Klopp said it would be his preference to field each this weekend to get them match sharpness...
PREMIER LEAGUE・2 HOURS AGO
The Independent

The 2021-22 Premier League is almost over and that means it is time for our team of the season.We asked our football writers to select their preferred formation and best XI of the campaign, before adding up the votes to create The Independent’s team of the season.Unsurprisingly, players from Liverpool and Manchester City make up seven of our final XI, as the two standout teams who are still battling for the title on the final weekend. Tottenham offer up a deadly attacking duo, Chelsea give us a tenacious centre-back, and West Ham’s box-to-box maestro takes up the final spot in...
PREMIER LEAGUE・4 HOURS AGO
Reuters