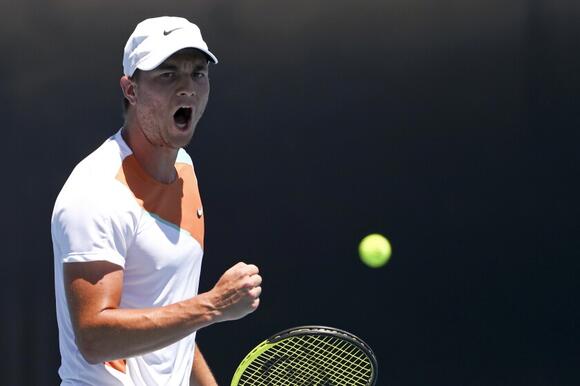 Novak Djokovic’s absence from the Australian Open has created opportunities for a fellow Serb, Miomir Kecmanovic.

Having avoided what would have been a formidable first-round round assignment against the nine-time champion, the 22-year-old Kecmanovic has put together three straight wins to reach the fourth round of a Grand Slam tournament for the first time.

The Belgrade native's confidence soared after beating Salvatore Caruso — the so-called lucky loser from qualifying who was elevated to the main draw after Djokovic’s deportation — then Tommy Paul and 25th-seeded Lorenzo Sonego to earn a shot at No. 17-seeded Gael Monfils.

“It’s unbelievable,” Kecmanovic said Friday. “A week ago I was supposed to play the world No. 1 and didn’t have much of a chance there, but now I’m in the last 16.

"So I’m happy that I was able to use this chance and that I’ve been playing some really good tennis.”

He won only a handful of games when he played Djokovic in the Serbia Open last year and wasn't expecting a lot more when the Australian Open draw was made last week.

Djokovic was deported on the eve of the tournament for not meeting Australia's strict COVID-19 vaccination requirements, giving Kecmanovic an opener against a player ranked in the 140s instead of No. 1.

“I didn’t have much pressure just because I felt that I got a second chance, so I just wanted to use it the best that I can," he said. "I’ve obviously been showing that well up until now.”

Kecmanovic had never previously ventured past the second round at a Grand Slam event, so now he's guaranteed his biggest payday with at least 328,000 Australian dollars ($240,000) in prize money so far.

Fan favorite Dylan Alcott's farewell to professional tennis will be at the Australian Open wheelchair event.

Alcott is aiming to defend the quad wheelchair singles title that made him the first player in any format to triumph in seven straight years at his home Grand Slam championship.

Alcott completed the so-called Golden Slam in 2021, winning quad wheelchair titles at all four of the Grand Slam tennis tournaments and at the Paralympics in Tokyo.

The history-making performance added to Alcott’s gold medal haul in singles and doubles, alongside compatriot Heath Davidson, at the Paralympics at Rio de Janeiro in 2016. In all, he has won 23 Grand Slam titles, with 15 of those victories in singles and eight in doubles.

Alcott is also working as a courtside commentator for the tournament's host TV network in Australia, and Nick Kyrgios stopped for a brief exchange with him during his second-round match against U.S. Open champion Daniil Medvedev on Rod Laver Arena.

Benoit Paire has given an emotional snapshot of life on the tennis tour during the COVID-19 pandemic.

“It’s not been easy since the beginning of the year,” Paire told Eurosport after his second-round win over No. 26-seeded Grigor Dimitrov at the Australian Open. "This year starts by testing positive. I isolate seven days. I played a big match today, one of my best in a very long time. So, for me it’s all positive.”

It's not the first time. Paire vented his frustrations last month after testing positive for the coronavirus.

“Hey my name is Benoit Paire, and for the 250th time I tested positive for Covid!!” he said in an Instagram post in December. “Last year was tough, and this year start exactly the same way. I’m 100% for the vaccine, but let’s just live as before COVID, otherwise I don’t see the point."

Paire was ruled out of the 2020 U.S. Open after testing positive for COVID-19 just days before his opening match. He didn't advance past the first round at any of the four majors in 2021.

The veteran Frenchman faces fourth-seeded Stefanos Tsitsipas on Saturday for a place in the last 16.