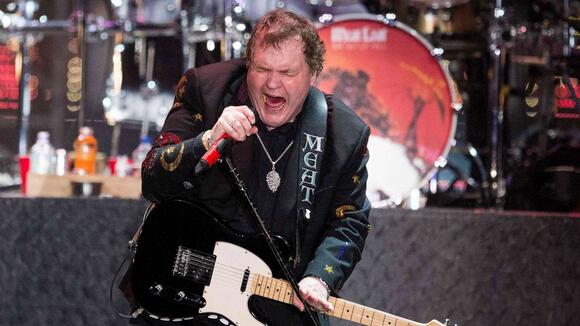 American singer and actor Meat Loaf has died. He was 74.

His death was announced in a statement posted on his official Facebook page late Thursday.

"Our hearts are broken to announce that the incomparable Meat Loaf passed away tonight with his wife Deborah by his side," the statement read. "Daughters Pearl and Amanda and close friends have been with him throughout the last 24 hours."

MORE: In Memoriam: Notable people who died in 2022

Born Marvin Lee Aday in Dallas in 1947, the musician better known by his stage name Meat Loaf became a legendary voice in rock music with a career that spanned six decades. He sold more than 100 million albums worldwide and appeared in over 65 movies, including iconic roles in "The Rocky Horror Picture Show" and "Fight Club."

Meat Loaf's 1977 debut album "Bat Out of Hell" remains one of the top-selling albums of all time. He also won a 1994 Grammy Award for the song "I'd Do Anything For Love."

"We know how much he meant to so many of you and we truly appreciate all of the love and support as we move through this time of grief in losing such an inspiring artist and beautiful man," the statement on Meat Loaf's official Facebook page read. "From his heart to your souls…don’t ever stop rocking!"

Robin Roberts got emotional as she opened up about her relationship with partner Amber Laign, especially in the midst of a challenging health battle. The Good Morning America star made an appearance on The Ellen DeGeneres Show to promote her new book, Brighter By the Day. VIDEO: Robin Roberts enjoys...
CELEBRITIES・23 DAYS AGO
Hello Magazine

Princess Eugenie has taken to her Instagram Stories to make an exciting announcement related to The Anti-Slavery Collective, which she co-founded with her best friend Julia de Boinville back in 2017. Resharing a message from the charity organisation, the mother-of-one revealed she was posting "news from my charity". WATCH: Princess...
CELEBRITIES・22 DAYS AGO
Popculture

90 Day Fiancé stars Anna-Marie Campisi and Mursel Mistanoglu have added a little boy to their family! The couple, who tied the knot on Season 7 of the TLC reality show, announced on Instagram this week that their son, Gokhan John, had been born via a surrogate on Monday, April 11 after the couple's initial struggle with fertility.
FAMILY RELATIONSHIPS・22 DAYS AGO
Hello Magazine

Kate Hudson has realized one of her dreams and has taken to Instagram to share the incredible news with her 15 million followers. Sharing two pictures of her looking casual in a pair of baggy dip-dyed trousers and a white tank top, and singing into a microphone, the actress announced a surprising career change.
CELEBRITIES・22 DAYS AGO

A wedding caterer has been praised for turning down all events where the bride and groom are asking their guests to pay for their own meals.In a recent post shared on the discussion-based site Mumsnet, a user explained that they run a “wedding catering company” that is “based on a food truck” and works for “less formal weddings”.They then revealed that some couples who have reached out to them about catering have been expecting their guests to purchase their own dinners at their weddings, a concept that the caterer said they have been “turning down” because they believe it is...
RELATIONSHIP ADVICE・23 DAYS AGO
People

Paulina Gretzky walked down the aisle in Vera Wang!. The bride shimmered during her wedding with pro golfer Dustin Johnson on Saturday at Tennessee's Blackberry Farm. Gretzky showed off the stunning look on Instagram Monday in a photo of the newlyweds kissing. "4/23/22♥," she simply captioned the post. For...
BEAUTY & FASHION・22 DAYS AGO
hotnewhiphop.com

It seems Coi Leray is getting fed up with the drama. She and her father, Benzino, have not seen eye to eye for quite some time, and despite numerous attempts to mend their relationship, they keep ending up back at square one. Yesterday, 50 Cent, whose been feuding with Benzino...
CELEBRITIES・24 DAYS AGO
People

Megan Fox wants her kids to express themselves however they please. In a wide-ranging interview with Glamour U.K. for their April cover story, the 35-year-old actress opens up about how she teaches her children, Journey River, 5, Bodhi Ransom, 8, and Noah Shannon, 9, about gender identity and encourages them to be confident in who they are.
FAMILY RELATIONSHIPS・22 DAYS AGO

Sharon Osbourne opened up about everything from her family life to her health in a tell-all interview over the weekend. And during the chat, the TV favorite spoke out about her devastating battle with bulimia, which she has been living with for many years. Talking to The Times, she told...
CELEBRITIES・22 DAYS AGO
ComicBook

After weeks of silence, Chris Rock has finally addressed his now-infamous incident with Will Smith at March's 94th Annual Academy Awards. During another sold-out show at Baltimore's Lyric Performing Arts Center on Friday, Rock directly referenced the slap, but only spent a second on it before moving on with his set.
BALTIMORE, MD・24 DAYS AGO
TMZ.com

Ne-Yo and his wife, Crystal Renay, are as serious as they can be about giving their marriage another go -- TMZ's learned, they just walked down the aisle again, and they did it up big!!!. Witnesses tell TMZ ... Ne-Yo and the former reality star got re-hitched Sunday night on...
CELEBRITIES・22 DAYS AGO
ABC News

Like mother, like daughter. That's the case for Heidi Klum's daughter Leni, who searched her mother's closet to find her prom dress. The 18-year-old posted a series of photos on Instagram Monday wearing a strapless knee-length black dress belonging to her supermodel mom. "Prom night in mamas dress," she wrote...
CELEBRITIES・1 DAY AGO

Spring is always a big time for engagements and weddings, and two beloved internet personalities are the latest to update their relationship status. On April 18, Rachel "Seltzer" Quirico revealed she and longtime boyfriend Trevor "TorcH" Housten were tying the knot after 17 years together. Both of them are beloved figures in the esports world, with Seltzer notably starring in the Syfy reality show WCG Ultimate Gamer. She's also hosted numerous esports tournaments and events for TV/streaming outlets; she also made a recent appearance on G4 TV's Boosted.
RELATIONSHIP ADVICE・22 DAYS AGO
HollywoodLife

‘Masked Singer’s Hayley Orrantia: How Ringmaster Helped Get Her ‘Self-Confidence’ Back

It all came down to Ringmaster vs. Firefly. The Masked Singer season 7 finale unmasked all 3 finalists, and The Goldbergs star Hayley Orrantia was revealed as Ringmaster just before Teyana Taylor’s Firefly was crowned the new champion. Cheyenne Jackson’s Prince came in third place. HollywoodLife spoke EXCLUSIVELY...
TV SERIES・40 MINUTES AGO