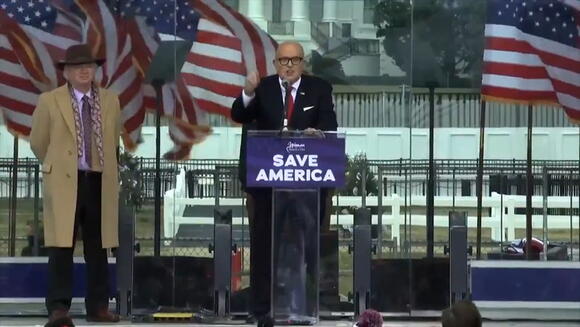 Rudy Giuliani and other Trump campaign officials were involved in overseeing efforts in December 2020 to put forward illegitimate electors in seven states, according to US media reports.

CNN and The Washington Post , citing party leaders and campaign officials who wished to remain anonymous, reported on Thursday on the steps the Trump campaign had taken to try and overturn Joe Biden ’s victory in the 2020 US presidential elections.

The illegitimate electors were put forward in Arizona, Georgia, Michigan, Nevada, New Mexico, Pennsylvania and Wisconsin, all the states in which Donald Trump had lost the elections from.

Campaign officials had lined up supporters to fill elector slots and had secured meeting rooms in these states for fake electors to meet in December that year, according to the media reports.

An anonymous Trump campaign staffer with knowledge of the matter told CNN that Mr Giuliani was “calling the shots”.

“It was Rudy and these misfit characters who started calling the shots. The campaign was throwing enough shit at the wall to see what would stick,” the former Trump campaign staffer told the news network.

Meshawn Maddock, co-chair of the Michigan Republican Party, was one of the 16 fake electors from the state who signed the illegitimate electoral vote certificates, according to CNN.

The news channel obtained a copy of a recording of a public event that had Ms Maddock claim the Trump campaign had channelled efforts over the electors.

“We fought to seat the electors. The Trump campaign asked us to do that,” Ms Maddock said at the event last week, according to the recording obtained by CNN.

Spokespeople for Mr Giuliani and Mr Trump did not respond to requests for comment, the broadcaster reported.

Representative Bennie Thompson, the chairman of the House select committee had said on Thursday that the panel was looking into whether there was a broader conspiracy or involvement from the White House in the creation or submission of the fake electors.

He said that this was a “concern.”

The subpoena that was issued to Mr Giuliani had also referenced his efforts to convince state legislatures to overturn election results.

The watchdog, in a 12 January release, said the forged documents were “a critical piece of the coordinated, multi-state effort to cast doubt on the 2020 election and subvert the will of American voters.”

The release also said that “none of the fake certificates contained any indication that they listed illegitimate slates of electors.”

A former official in Donald Trump’s administration is sounding the alarm about the danger of far-right rhetoric in the wake of the mass shooting in Buffalo, New York.Miles Taylor, a former deputy chief of staff at the Department of Homeland Security, wrote on Twitter early on Sunday morning that the words of “leaders” of the GOP, including presumably Donald Trump, was responsible for “directly” inspiring violence like the attack an 18-year-old is accused of carrying out in a Buffalo supermarket on Saturday that left 10 dead and others injured.“I spent a decade working in counterterrorism. The rhetoric we are...
PUBLIC SAFETY・1 DAY AGO
NBC News

MEXICO CITY — Mexican President Andrés Manuel López Obrador on Monday urged U.S. Latinos not to vote in November’s midterm elections for politicians who have “mistreated” them, in response to a comment by former U.S. President Donald Trump. Trump boasted at a rally in...
PRESIDENTIAL ELECTION・20 DAYS AGO
WashingtonExaminer

When President Joe Biden named Kamala Harris as his running mate, he promised his former campaign rival would be one of the most influential voices in the White House.
PRESIDENTIAL ELECTION・20 DAYS AGO
Business Insider

Greene testified on Friday that she didn't recall whether she asked Trump to invoke military rule, despite telling Meadows to relay the idea to Trump.
ATLANTA, GA・21 DAYS AGO

Vladimir Putin's hand appears to tremble before he greets another man, which has sparked further concern over the Russian leader's health.
WORLD・21 DAYS AGO
The US Sun

ANOTHER batch of stimulus checks worth up to $1,200 is set to go out to thousands of Americans this month. Under California’s Golden State I (GSS 1) and Golden State Stimulus II (GSS II) programs launched in 2021, eligible residents are getting up to $1,100 and $1,200 respectively. In...
CALIFORNIA STATE・28 DAYS AGO
Daily Mail

Senator Lindsey Graham has said he was wrong to describe Joe Biden as 'the best person' to lead the country after the January 6 insurrection. Graham was recorded speaking to New York Times reporter Jonathan Martin on the day of the riot itself. Martin has written a new book with...
PRESIDENTIAL ELECTION・3 DAYS AGO
WashingtonExaminer

Former Trump lawyer Michael Cohen threw his former boss under the bus on Monday, appearing to contradict claims that the former president does not possess the documents New York Attorney General Letitia James is after.
POTUS・19 DAYS AGO

The Kremlin has refused to acknowledge its death toll in Ukraine, though a spokesperson admitted that Russia suffered "significant losses."
MILITARY・21 DAYS AGO
The Independent

A legal effort to ban Marjorie Taylor Greene from standing for re-election has been given the go-ahead by a federal judge, who denied the far-right Georgia congresswoman’s attempt to have the case against her thrown out – paving the way for further proceedings by the end of this week.The news led Ms Taylor Greene to complain that “I have to go to court on Friday and actually be questioned about something I’ve never been charged with and something I was completely against.”Ms Greene, a hardline pro-Trump Republican who has long circulated false conspiracy theories, is accused by campaigners of...
CONGRESS & COURTS・27 DAYS AGO
Business Insider

EXCLUSIVE: A group of Republican senators is introducing legislation to block the Biden administration from sending personnel and funding from the Department of Veterans Affairs (VA) to alleviate the crisis at the southern border. The senators are alarmed by the Biden administration's announced termination of Title 42 on May 23,...
CONGRESS & COURTS・20 DAYS AGO

Rep. Greene has repeatedly pushed the conspiracy theory that left-wing activists and rogue FBI agents carried out the siege.
GEORGIA STATE・21 DAYS AGO
The Independent

Marjorie Taylor Greene is being slammed online for claiming that a video showing US lawmakers visiting Ukrainian president Volodymyr Zelensky proves the country is safe, because a Republican delegation wasn’t wearing bulletproof vests as they toured Kyiv.“Notice U.S. elected politicians like [House Speaker Nancy Pelosi] and [Senate Minority Leader Mitch McConnell] can go visit Zelensky in Ukraine without bullet proof vests/helmets or any fear from dangers of war, while they eagerly give billions to fund their proxy war w/ Russia,” the Georgia Republican wrote on Twitter on Saturday.“If the conditions in Ukraine were so grave to warrant the U.S....
WORLD・2 DAYS AGO
US News and World Report

WASHINGTON (Reuters) - The United States on Tuesday offered a reward of up to $10 million for information on six people it described as Russian military intelligence officers who had conducted cyber attacks affecting critical U.S. infrastructure. The six officers work in a cyber-focused unit of Russia's Main Intelligence Directorate...
PUBLIC SAFETY・19 DAYS AGO
Business Insider

The FBI also seized financial records and fine art in the October 2021 raids on properties linked to billionaire Oleg Deripaska, per Bloomberg.
WASHINGTON, DC・20 DAYS AGO

The intelligence the U.S. shared with Ukraine helped it continue to resist Russian invading forces and even shoot down a transport plane carrying hundreds of Russian troops, a new report revealed. According to current and former U.S. officials who spoke with NBC News on Tuesday, the U.S. provided critical intelligence...
MILITARY・19 DAYS AGO
Business Insider

Harvard polled Americans under 30 who are likely to vote in the midterms and found 85% of them want some government action on student loan debt.
PRESIDENTIAL ELECTION・21 DAYS AGO
The Independent

Representatives Dan Crenshaw and Marjorie Taylor Greene feuded on Twitter after the two Republican members of Congress took different votes on an aid package to Ukraine.On Tuesday, the House passed a $40bn aid package to Ukraine. Every Democrat present voted for the legislation, while 57 Republicans voted against the package, including Ms Greene. Other Republicans who voted against the legislation included Representatives Paul Gosar of Arizona, Matt Gaetz of Florida, Madison Cawthorn of North Carolina and Lauren Boebert of Colorado. But the feud began when Mr Crenshaw, a Texas Republican who lost an eye while serving in Afghanistan, tweeted...
FOREIGN POLICY・4 DAYS AGO
Business Insider

International order will be thrown out the window if Russia is able to escape consequences over its invasion of Ukraine, US Gen. Mark Milley told CNN.
POLITICS・20 DAYS AGO