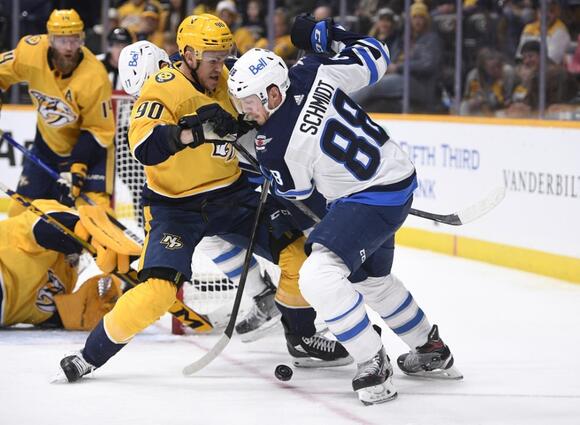 Josi, who has played all 11 of his NHL seasons in Nashville and leads the team with 42 points, moved ahead of David Legwand into the top spot on the club’s all-time list with assist No. 357 on Mikael Granlund’s goal at the 11:49 mark of the opening period.

He then helped set up Ryan Johansen for the Predators’ third goal of the first. Eali Tolvanen opened the scoring, and the team’s final two came when Johansen assisted on Luke Kunin’s second-period goal and Tanner Jeannot added an empty-netter. Nashville haltedits 0-3-1 rut.

Pierre-Luc Dubois recorded his 17th goal and Mark Scheifele’s 10th came early in the third for the Jets, who have dropped back-to-back contests after winning four of five.

Winnipeg outshot the Predators 38-23, with 15 coming in the third, but Nashville’s Juuse Saros (36 saves) was stout enough to preserve the lead and record his 21st victory.

Nashville wasted no time, scoring 4:43 into the contest. Matt Benning threw a shot on net from the point, and Tolvanen batted in the rebound.

The Predators made it a 2-0 when Josi picked up his milestone assist. Off Dubois’ turnover in his own end, Granlund eventually got the puck, and his shot deflected off the back of Jets defenseman Neal Pionk and past Winnipeg’s Connor Hellebuyck (18 saves). Josi then dropped a pass to Johansen, who drove the puck through the legs of Hellebuyck with 2:25 left in the first for a 3-0 Nashville lead.

Dubois, though, earned some redemption at the 6:41 mark of the second. With the Jets owning a 5-on-3 advantage, he threw the puck in front of the net, where it ticked off the leg of Nashville’s Alexandre Carrier and in to cut the host’s lead to 3-1.

The Predators regained their three-goal edge when Kunin deflected in Matt Tennyson’s point shot with 7:38 left in the middle frame.

Just 25 seconds into the third, Scheifele cut into Nashville’s lead.

Rangers attempt to conclude comeback in Game 7 vs. Penguins

The New York Rangers exceeded expectations during a spectacular regular season and highlighted one of the best seasons in team
PITTSBURGH, PA・2 DAYS AGO
Sportsnaut

They posted the best records in their respective conferences during the regular season. With one round now complete in the
SUNRISE, FL・8 HOURS AGO
Sportsnaut