By Stuti Mishra,Emily Atkinson,Laurie Churchman and Liam James
The Independent
2022-01-22 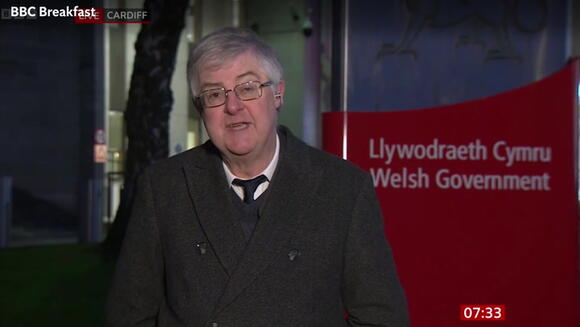 Health authorities are investigating BA.2, a lineage of the Omicron variant, after it was found to have caused hundreds of coronavirus cases in England.

Some 426 cases of the new sub-variant have been identified in England, with 146 in London and 97 in the South East, the UK Health Security Agency (UKHSA) said. This compares with the previous total of 53 cases detected up until 10 January.

Unlike the original Omicron variant, which accounts for the majority of cases in the UK, BA.2 does not have the specific mutation that was used to first track and compare it against Delta last month.

Meanwhile, plans to make vaccination mandatory for NHS staff are reportedly being reviewed over fears that some 70,000 health service staff could be lost as a result.

Sources told the i newspaper that a temporary suspension of the policy was being “actively” looked at within the Department of Health and Social Care (DHSC), following multiple warnings and pleas from hospital trusts.

So will Biden ban travel to and from Britain or is that just for when he thinks the variants are coming from mostly BLACK countries? What does that tell ya, folks?

I was a healthy 39-year-old woman and after my vaccine and booster I have lost my right leg from knee down due to blood clot. I have been in the hospital for 7 1/2 weeks, as I am currently struggling with two more ominous clots. I wish I could go back in time, I would’ve never taken this vaccine.

In a follow-up on the 14th Ebola Virus Disease (EVD) outbreak in the Democratic Republic of the Congo (DRC) (HERE and HERE), the World Health Organization (WHO) tweeted today:. Health authorities in #DRC confirmed a 2nd case of #Ebola in Mbandaka on 25 April. The 25-year old woman, now deceased, began experiencing symptoms 12 days earlier. Investigations indicate that as the 1st case patient’s sister-in-law, she was a high-risk contact.
PUBLIC HEALTH・25 DAYS AGO
The Independent

The UK Government has taken further legislative action in a bid to ensure the full delivery of abortion services in Northern Ireland.Abortion laws in the region were liberalised in 2019 following laws passed by Westminster at a time when the powersharing government at Stormont had collapsed.However, while individual health trusts in Northern Ireland currently offer services on an ad-hoc basis, the Department of Health has yet to centrally commission the services due to a political impasse on the issue.The DUP, which is opposed to abortion, has refused to agree to the issue being tabled on the agenda of the ministerial...
WOMEN'S HEALTH・2 DAYS AGO
The Independent

UK holidaymakers who have not had a coronavirus jab can now travel to Spain by showing a negative PCR or lateral-flow antigen test when they arrive.Since 1 December, the country has had a strict ban on unvaccinated travellers from non-EU countries, because of fears over the Omicron variant of Covid-19. It was one of the strictest entry rules in Europe.But now the Spanish government has announced passengers who have not had a jab may enter the country with immediate effect.Fully vaccinated passengers will still need to show proof of vaccination.The government announced that all UK travellers, except children under 12,...
PUBLIC HEALTH・9 HOURS AGO
The Independent

The legal smoking age in the UK could be raised to 21 as part of a “radical” review commissioned by health secretary Sajid Javid, reports claim.The review is expected to arrive in the coming weeks in a bid to slash the number of smokers in Britain to 5 per cent by 2030, The Telegraph understands.Led by former Barnardo’s CEO Javed Khan, it is likely the report will recommend that the legal age to purchase cigarettes is raised and that new taxes are levied on profits made by tobacco companies. The newspaper also claims the report will push the NHS to...
HEALTH・10 HOURS AGO

A top US official in the Pacific has warned that America would have to “respond” if the Solomon Islands allows China to establish a military base there.Following a “constructive and candid” 90-minute meeting with prime minister Manasseh Sogavare, ambassador Daniel Kritenbrink said that the security deals between China and the Solomon Islands present “potential regional security implications” for the US and other allies.“We wanted to outline for our friends in the Solomons what our concerns are,” Mr Kritenbrink, US assistant secretary for East Asian and Pacific Affairs, told reporters.“We have respect for the Solomon Islands’ sovereignty. But we also...
FOREIGN POLICY・25 DAYS AGO
Insider

"They might as well just burn us all inside our homes," a user commented online, referring to how the structures are fire hazards.
PUBLIC HEALTH・27 DAYS AGO
Business Insider

A member of a superyacht crew also told The Times of London that one owner had his bar stools made from whale foreskin.
BOATS & WATERCRAFTS・27 DAYS AGO
The US Sun

MILLIONS of Brits have been urged to take up a rapid test to see if they have bowel cancer. The Health Secretary has called on men over 60 to make sure they have the life-saving checkups. It couldn't be easier - with a home testing kit on offer, or use...
CANCER・26 DAYS AGO
The Independent

Boris Johnson has threatened to unleash “terrors of the earth” on the Conservative MP who made misogynistic claims about Labour deputy leader Angela Rayner.An unnamed Tory MP told the Mail on Sunday that Ms Rayner crossed and uncrossed her legs on the Labour front bench during PMQs in an attempt to distract the prime minister.Mr Johnson described the comments made about Labour deputy leader Angela Rayner in a newspaper article as “the most appalling load of sexist, misogynist tripe”.In a King Lear reference, the PM threatened to unleash “the terrors of the earth” on the source behind the comments...
POLITICS・26 DAYS AGO
The Independent

Dr Anthony Fauci has issued a stark warning that society is in “decline” because of the spread of disinformation and propaganda.The nation’s top infectious disease expert told graduates of Roger Williams University on Friday that the Covid-19 pandemic had laid bare the “normalisation of untruths” and the “divisiveness” across the US.He urged the audience to “reject the politicisation of science” and the “outright lies” that pose a “danger” to the country.“It is our collective responsibility to not tacitly accept the normalisation of untruths because, if we do, we invite dangers to ourselves, our families, our communities and our country,”...
EDUCATION・1 DAY AGO
The Independent

Russia has announced it will deploy its recently tested “Satan II” missile by the autumn, as tensions between Moscow and the west mount amid the Ukraine war.The Kremlin announced the first test launch of its new, nuclear-capable Sarmat intercontinental ballistic missile (ICBM) system on Wednesday, with experts warning the warhead could target the UK as well as Europe and the US. The Sarmat is capable of carrying 10 or more nuclear warheads and decoys, and of striking targets thousands of miles away in the United States or Europe.This week's test, after years of delays due to funding and technical...
POLITICS・27 DAYS AGO
US News and World Report

WASHINGTON (Reuters) - The United States on Tuesday offered a reward of up to $10 million for information on six people it described as Russian military intelligence officers who had conducted cyber attacks affecting critical U.S. infrastructure. The six officers work in a cyber-focused unit of Russia's Main Intelligence Directorate...
PUBLIC SAFETY・25 DAYS AGO
The Independent

An intervention by US Speaker Nancy Pelosi in a row over the Northern Ireland Protocol has been slammed by the DUP leader as “unhelpful”.Ms Pelosi said the US Congress will not support a free trade agreement with the UK if the Government persists with “deeply concerning” plans to “unilaterally discard” the protocol.In a strongly-worded intervention, Ms Pelosi urged the UK and the EU to continue negotiations on the post-Brexit trade arrangements to uphold peace in the region.The congresswoman said in a statement: “The Good Friday Accords are the bedrock of peace in Northern Ireland and a beacon of hope for the...
CONGRESS & COURTS・1 DAY AGO
The Independent

Children have been arming themselves with weapons at a young offenders institution with the highest violence rates of any prison in England and Wales, according to a report.Inspectors found there had been 105 assaults among young inmates – 31 of which were so serious they resulted in hospital admission – and 82 on staff over just six months at HMYOI Werrington.The prison was judged to be overly reliant on “keep-apart” lists – used to separate groups or individuals at risk of becoming violent if allowed to mix.An “astonishing” 263 “keep-aparts” were in place for just 66 children, Her Majesty’s Inspectorate...
PUBLIC SAFETY・2 DAYS AGO
The Independent

The Prince of Wales and Duchess of Cornwall took part in a “Feeding the Fire Ceremony” as they were welcomed to a remote Canadian outpost on the final day of their tour.Their visit to the Northwest Territories came after the prince faced calls for the Queen to apologise for the “assimilation and genocide” of Canada’s indigenous residential schoolchildren.As drums were played Charles and Camilla watched as offerings of tobacco were thrown into a fire pit after they joined leaders and elders from the area in the settlement of Dettah, a thriving First Nations community of a few hundred.Leaders of First...
WORLD・2 DAYS AGO
The Independent

Ukraine's neighbour Moldova should be "equipped to Nato standard" to guard it against possible Russian aggression, UK foreign secretary Liz Truss said.There is a need to ensure that Ukraine is “permanently able to defend itself”, and this also applies to other “vulnerable states” such as Moldova, which is not a Nato member – she added.Russia “absolutely” poses a security threat to Moldova, she said, as Vladimir Putin “has been clear about his ambitions to create a greater Russia.”She told The Telegraph: “What we’re working on at the moment is a joint commission with Ukraine and Poland on upgrading Ukrainian...
POLITICS・20 HOURS AGO
The Independent

Voices: First Wills in Jamaica, now Charles in Canada – these royal tours are forcing the Windsors to confront the past

Canada’s indigenous communities have appealed directly to Prince Charles for an apology from the monarchy for past colonial genocide during his tour of the country.This cry for atonement from the palace serves as confirmation – if ever it were needed – of how incumbent it is for the royal family to finally pay their dues by addressing the atrocities of the past. The future king and his wife Camilla, Duchess of Cornwall, have been on a three-day tour of Canada – where the Queen is head of state – to mark the 96-year-old monarch’s platinum jubilee. It was there that...
AMERICAS・1 DAY AGO