Special teams the difference in Sabres' loss to Dallas 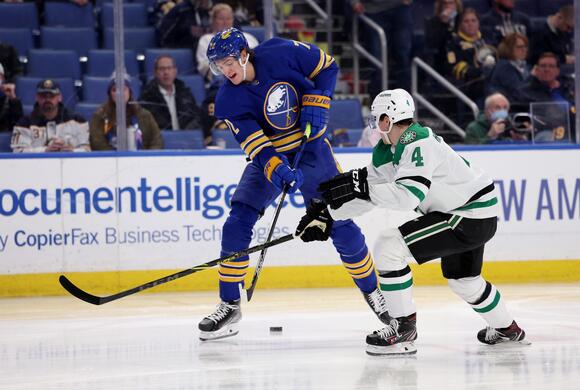 The Dallas Stars used four power play goals, including two in the third period to defeat the Buffalo Sabres, 5-4, on Thursday night at KeyBank Center.

Rasmus Dahlin scored less than three minutes into the game to give the Sabres a 1-0 lead. The defenseman glided in from the blue line and stick handled around Braden Holtby for the game's first goal.

Jack Quinn's hot streak in the American Hockey League carried over with Buffalo after being called up prior to the game. The rookie scored his first career NHL goal while on the power play. It extended the Sabres' lead to 2-0 over Dallas midway through the first.

The Stars used a power play goal of their own to halve the first period deficit to 2-1. Jason Robertson was able to convert on a rebound chance in the slot for his 14th goal of the year. It came with Robert Hagg in the penalty box for hooking.

Buffalo wasted no time in the second period extending the lead back to a pair of goals. Dylan Cozens scored his 10th goal of the season after a nice pass from Victor Olofsson sprung the 20-year-old for a scoring chance. The forward was credited with an assist, along with Quinn.

Dallas, once again, answered back with a power play goal. Roope Hintz was able to tap in a shot at the side of the net for his 16th goal of the season and make the score 3-2 in the middle stanza.

A little more than halfway through the second period, the Stars were outshooting Buffalo, 15-5. They took advantage of the time spent in the Sabres' end, as Tyler Seguin scored to tie the game at 3-3.

Dallas held a 28-15 edge overall in shots on goal midway through the game.

Alex Tuch used a deceptive move in the offensive zone to, once again, give the Sabres the lead, 4-3. His third goal since joining the Sabres was assisted by Dahlin and Henri Jokiharju.

A pair of power play goals in the third period helped Dallas eventually overtake the Sabres, 5-4. Seguin's second goal of the night came on the man advantage while Cody Eakin served a minor penalty for slashing. Meanwhile, Robertson's second goal of the game was scored when he knocked the puck out of the air in front of the net.

The Sabres will return to game action on Saturday for a matinee affair with the Philadelphia Flyers at KeyBank Center. Faceoff is set for 1 p.m. EST with pregame coverage on WGR starting at 12 p.m. EST with Brian Koziol.

The Amerks have hit their stride at just the right time of the season.

The Amerks are a small team, but players like Peterka and Peyton Krebs have refused to be intimidated. Fitzgerald said, “We’re not afraid to play a physical game either, so we embrace it and its playoff hockey so it comes with the territory.”
ROCHESTER, NY・2 DAYS AGO
WGR550

Rochester dominated by Comets in Game 4; series goes to fifth game in Utica

Rochester gets dominated in Game 4, but still has Game 5 against Utica.

You could see Rochester backing in and not challenging Utica at the blue line. As a matter of fact, on a 2-on-1, Casey Fitzgerald backed right into Dell knocking him down allowing A.J. Greer to score. Greer had two goals on the game and now has six.
ROCHESTER, NY・1 DAY AGO
Sportsnaut

Gerard Gallant of the New York Rangers, Andrew Brunette of the Florida Panthers and Darryl Sutter of the Calgary Flames
NEW YORK CITY, NY・25 MINUTES AGO