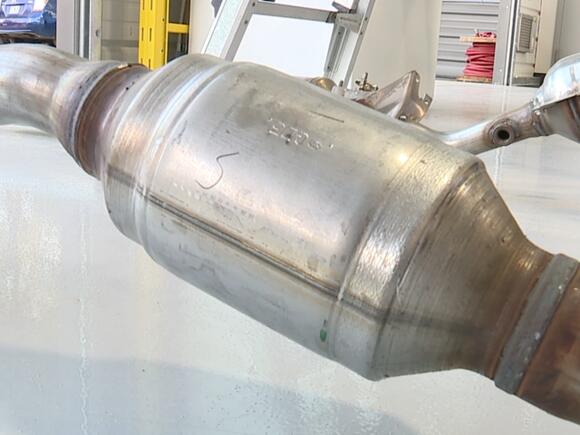 It took only a few seconds Friday for Matthew Lerret to realize something was wrong with his Prius.

"It sounds like a lawnmower is right in your ear," he said, "At that point, it occurred to me that my catalytic converter got stolen."

"When I made a police report the officer had mentioned that catalytic converters being stolen was something that they had been seeing a pattern of," said Lerret.

Across town, the owner of Tampa Hybrids, Inc., Todd Thompson, says he's hearing and seeing more of the same.

"In this particular one, the thieves cut the catalytic converters out. Sometimes they cut them on both ends," said Thompson.

Crooks hit at least five of his customers and stole from the business itself.

"We have video of the two that were stolen off our lot this past Sunday and they were probably here five or six minutes and did two of them?"

And these thieves aren't amateurs.

That converter is a part of the exhaust system that most cars have.

But in this case, Thompson says someone is specifically targeting Priuses made between 2004 and 2009.

"The Prius is one of those that has a really high content palladium, platinum, and rhodium," he said.

Priuses made between those years typically have the most precious metals, meaning their converters can be sold for about $900.

"The core buyers will not buy from somebody who cannot show proof of ID. You have to have a VIN number in most cases from the car it came off of. So there's got to be a secondary market they're selling them to," said Thompson.

To help protect yourself, Thompson says you can have a shield installed for $300-$450, among other things.

"Cameras are not going to bring your catalytic converters back so a shield is probably one of the best protections you can get, a motion-sensing alarm, or just being parked somewhere where it's secure with a big fence or a dog or something like that," he said.

A young boy is in serious condition at Tampa General after a house fire in Seffner on Thursday night. A heart-stopping video shared by the sheriff's office showed body camera video from deputies as they pulled the boy from the burning home.
SEFFNER, FL・1 DAY AGO
ABC Action News WFTS

Several shelters across Tampa Bay are at capacity, and it's leaving many single moms with nowhere to turn.
TAMPA, FL・19 HOURS AGO
ABC Action News WFTS

Man arrested after barricading himself inside Tampa apartment

A man who barricaded himself inside an apartment for several hours Thursday morning has been arrested, according to the Tampa Police Department.
TAMPA, FL・2 DAYS AGO

The Pasco County Sheriff's Office (PCSO) said an 18-year-old has been taken into custody in connection to a shooting in Dade City that left two kids injured and a man dead Wednesday afternoon.
DADE CITY, FL・2 DAYS AGO
CNN

THONOTOSASSA, Fla. — The Hillsborough County Sheriff's Office shared body camera video Monday that showed the moment a deputy and K9 found a missing woman in the woods. The sheriff's office said deputies were called to a home on Bonnet Hole Drive in Thonotosassa shortly before 11 a.m. Sunday after a woman who suffers from dementia walked away from her home Saturday afternoon.
THONOTOSASSA, FL・4 DAYS AGO
ABC Action News WFTS

Major push to get citizens trained to ‘Stop the Bleed’

On the heels of yet another mass shooting, this time in Buffalo, N.Y., there’s a nationwide push to teach people how to “Stop the Bleed.”
BUFFALO, NY・1 DAY AGO
ABC Action News WFTS

Palmetto Police arrested a 13-year-old boy from Bradenton for allegedly firing a shot during a fight at a football game.
BRADENTON, FL・1 DAY AGO
ABC Action News WFTS

The Pinellas County Sheriff's Office said one of its deputies was fired on Tuesday after her arrest earlier that morning for driving under the influence in St. Pete.
PINELLAS COUNTY, FL・4 DAYS AGO
ABC Action News WFTS

Reminiscing on the start of Outback in South Tampa

"First opened up there wasn't a lot of traffic, and that we didn't advertise it first. So what we used to do is everyone worked every day and so they'd let some people off and they'd make us sit by the windows and they pull our cars in the parking lot and make it look like it was full," explained Richard Menendez, bartender at Outback Steakhouse.
1 DAY AGO
ABC Action News WFTS

The prosecution says evidence points toward James Davis. Davis and his wife were living in the converted garage in Perry’s Zephyrhills home. Monday featured opening statements from both sides, and witnesses on some of the evidence that was found.
PASCO COUNTY, FL・4 DAYS AGO
ABC Action News WFTS

The government estimates more than 20,000 Social Security recipients lost $33.5 million to thieves who diverted their money to other accounts between 2013 and 2018.
TAMPA, FL・1 DAY AGO
ABC Action News WFTS

A fire destroyed a two-story building after someone improperly disposed of a cigar. Tampa Fire Rescue responded to a fire at a building on East Lake Avenue in Tampa around 5:20 p.m. Tuesday.
TAMPA, FL・3 DAYS AGO
ABC Action News WFTS

Palmetto Police said there were no injuries after a shot was fired during a fight at a Palmetto High School football game on Wednesday night.
PALMETTO, FL・2 DAYS AGO
ABC Action News WFTS

A Riverview teacher is being called a hero after saving a 4th-grade student from choking on a mint.
RIVERVIEW, FL・3 DAYS AGO
ABC Action News WFTS

98 kids drowned in FL in 2021, local school hopes to change that

Drownings in Florida reached a somber record in 2021 with 98 children who drowned across the state. In 2022, 21 children have already drowned in Florida and we haven’t even reached the peak summer months.
CLEARWATER, FL・3 DAYS AGO