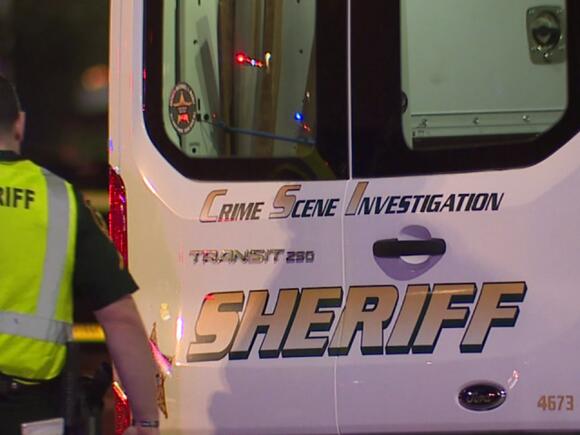 Pinellas detectives arrested a Clearwater man after they say he killed another man in a domestic disturbance.

According to detectives, on January 20, around 10:09 a.m., deputies responded to a residence located at 15149 Avalon Avenue in clearwater, for reports of a domestic disturbance.

Deputies arrived to find Robert Warren, 31 in the driveway with blood on his hands. Deputies arrested Warren then entered the home. Inside they found Jerry Lebreux 64, deceased from upper body trauma. Lebreux was pronounced deceased at the scene.

Detectives say Warren and Lebreux were the only occupants at the residence during the incident.

Warren was charged with second-degree murder and transported to the Pinellas County Jail.

Man arrested after barricading himself inside Tampa apartment

A man who barricaded himself inside an apartment for several hours Thursday morning has been arrested, according to the Tampa Police Department.
TAMPA, FL・11 HOURS AGO
ABC Action News WFTS

Palmetto Police said there were no injuries after a shot was fired during a fight at a Palmetto High School football game on Wednesday night.
PALMETTO, FL・11 HOURS AGO
ABC Action News WFTS

The prosecution says evidence points toward James Davis. Davis and his wife were living in the converted garage in Perry’s Zephyrhills home. Monday featured opening statements from both sides, and witnesses on some of the evidence that was found.
PASCO COUNTY, FL・3 DAYS AGO

In a new PSA, Hillsborough County Sheriff Chad Chronister is urging drivers to follow the state Move Over law. The sheriff shared a video from earlier this month where a deputy was nearly hit by a passing vehicle during a traffic stop.
HILLSBOROUGH COUNTY, FL・2 DAYS AGO
ABC Action News WFTS

Woman injured after allegedly being shot by husband

A fire destroyed a two-story building after someone improperly disposed of a cigar. Tampa Fire Rescue responded to a fire at a building on East Lake Avenue in Tampa around 5:20 p.m. Tuesday.
TAMPA, FL・1 DAY AGO
ABC Action News WFTS

Andrea Wagner was taken into custody by deputies after they wrapped up an almost six week investigation Wednesday. Deputies found Wagner was making deals with a construction company she was supposed to investigate and cite.
PINELLAS COUNTY, FL・1 DAY AGO

Major push to get citizens trained to ‘Stop the Bleed’

A Riverview teacher is being called a hero after saving a 4th-grade student from choking on a mint.
RIVERVIEW, FL・1 DAY AGO
ABC Action News WFTS

The Florida Highway Patrol said five children and one adult were seriously injured after they crashed into the back of a vehicle that was stopped in the middle of the road by an impaired driver early Monday morning.
PASCO COUNTY, FL・3 DAYS AGO
ABC Action News WFTS

Pinellas County is hosting a public hearing and meeting as it studies improvements for busy East Lake Road.
PINELLAS COUNTY, FL・1 DAY AGO

For decades residents of the Childs Park neighborhood in St. Petersburg complained of a foul odor that wafts through their yards and seeps into their homes. Residents had a chance to speak with local authorities about their concerns Tuesday evening.
SAINT PETERSBURG, FL・1 DAY AGO
ABC Action News WFTS

They’re small, but they have big appetites. What they crave is the vector of several diseases, including West Nile Virus. They're called mosquitofish, and this weekend, Hillsborough County will be giving them away for free.
HILLSBOROUGH COUNTY, FL・15 HOURS AGO
ABC Action News WFTS

Pasco County Fire Rescue said southbound I-75 is shut down at Lake Iola due to a serious crash involving a semi.
PASCO COUNTY, FL・2 DAYS AGO
ABC Action News WFTS

This month J Lee Salon Suites welcomed 30 new business owners from the beauty and wellness world, many of them moms looking for control and flexibility.
CLEARWATER, FL・2 DAYS AGO
ABC Action News WFTS

A shortage of school bus drivers has been a topic of concern for many school districts across the Tampa Bay area for years. Hillsborough County Schools hopes it can fill that void during two hiring events this week.
HILLSBOROUGH COUNTY, FL・1 DAY AGO
ABC Action News WFTS

Pinellas county says is taking the state to court over a new elections law that they claim unfairly targets them out of all other counties in the state. ABC Action News reporter Rochelle Alleyne breaks down the law's impact and why some believe bad politics was at the heart of this bill.
PINELLAS COUNTY, FL・23 HOURS AGO
ABC Action News WFTS

Mark VanDeRee’s corner of eastern Manatee County is a slice of ‘Old Florida’ that impresses guests with its quaint, quiet charm. “I love to fish. I love to hunt,” he said. “I love to have visitors come in from out of state, and I take them out here, and they say, ‘Wow, we had no idea that Florida was so beautiful.’”
MANATEE COUNTY, FL・3 DAYS AGO
ABC Action News WFTS