Report: NFL Issues Punishment for Cowboys’ Dak Prescott on His Comments From Sunday 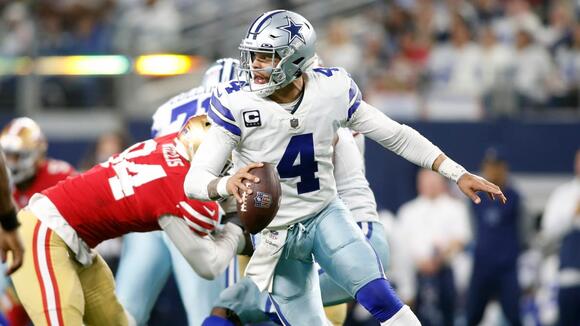 The quarterback issued an apology for his comments concerning the referees on Tuesday.

The NFL fined Dallas quarterback Dak Prescott $25,000 for his post-game comments about fans throwing trash at the referees following the Cowboys’ 23–17 loss to the 49ers on Sunday, according to ESPN’s Adam Schefter .

On Tuesday, hours after the National Basketball Referees Association issued a statement expressing its disapproval of Prescott’s initial comments, Prescott issued an apology. Prescott backtracked his initial comments and said he respects the league's officials.

“I hold the NFL Officials in the highest regard and have always respected their professionalism and the difficulty of their jobs,” Prescott said in his apology. “The safety of everyone who attends a game or participates on the field of a sporting event is a very serious matter.

"That was a mistake on my behalf, and I am sorry.”

Prescott was initially disappointed by fans throwing trash and debris as players exited the field after the game. However, when the two-time Pro Bowler found out that fans were throwing debris at the referees, he said “Credit to them then.”

Dallas finished this season with a wild-card playoff loss. Prescott threw for 4,449 yards, 37 touchdowns and 10 interceptions.

oh really it's ok to take some of his money back for making a comment in a emotional out burst after a crushing lost, but don't never fine the refs for bluntly cheating in front of the entire world , the league just don't let them referee a playoff game. and the only thing the team they cheated against get is an apology from the league year after year.

The Cowboys just could not beat teams that had winning records all season long. Not a bad call, they just lost...😎 #Statthat

May 20 (Reuters) - Michael Vick, the once-dynamic NFL quarterback whose involvement in a dogfighting ring halted a breathtaking career in its prime, has agreed to come out of retirement to join startup league Fan Controlled Football, a source told Reuters on Friday. Vick, a former first overall draft pick...
NFL・13 HOURS AGO
Sports Illustrated

The quarterback played in Indianapolis for one season.
INDIANAPOLIS, IN・2 DAYS AGO
Sports Illustrated

The UCF coach had little to say about his former rival coaches.
AUBURN, AL・22 HOURS AGO
Sports Illustrated

The Alabama coach: "There’s nothing illegal about doing this. It’s the system. That’s the issue I have."
COLLEGE SPORTS・1 DAY AGO

The Lakers’ star doesn’t even hold back when playing against his son.
LOS ANGELES, CA・1 DAY AGO

Mailbag: When Are the 49ers Going to Trade Jimmy Garoppolo?

Setting an over/under date for the 49ers to trade their injured quarterback. Plus, when the Cowboys may be back in the NFC championship, worst-to-first guesses and more.
NFL・2 DAYS AGO
DallasBasketball

The Mavericks staggered Golden State early with 15 first-half 3-pointers, but went cold in the second half in falling in an 0-2 hole in the Western Conference Finals.
DALLAS, TX・24 MINUTES AGO
Sports Illustrated

Peter Schrager Names His 5 Most Underrated QBs Of All-Time

Bet on this four-leg, same-game parlay at SI Sportsbook for Game 2 of the Western Conference finals between the Mavericks and Warriors.
DALLAS, TX・12 HOURS AGO
Sports Illustrated

Head coach and GM candidates will get face time with owners at the league’s spring owners meeting. Plus, James Bradberry’s fit with the Eagles, the Patriots’ lack of QB coaching and more.
NFL・1 DAY AGO