By Pamela McClintock
The Hollywood Reporter
2022-01-21 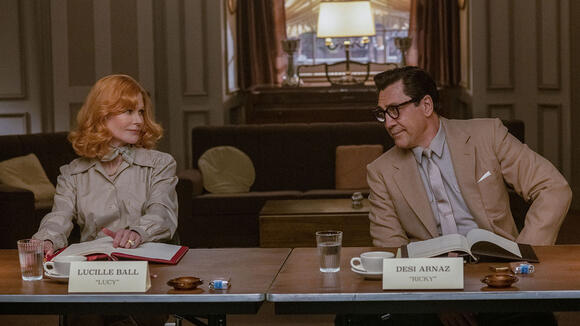 Amazon Studios’ original movie Being the Ricardos secured strong viewership numbers in its debut on the streamer over Christmas week.

Directed by Aaron Sorkin, the movie stars Nicole Kidman as Lucille Ball and Javier Bardem as Desi Arnaz. The film chronicles one of Hollywood’s most famous power couples and their iconic TV show, I Love Lucy .

Netflix and Adam McKay’s Don’t Look Up , which is competing with Being the Ricardos in this year’s awards race, also popped up on Nielsen’s top 10 chart for the week with 521 million minutes viewed.

However, Don’t Look Up didn’t begin streaming until Christmas Eve, making comparisons with Being the Ricardos difficult. Additionally, Nielsen will release revised viewership numbers for Don’t Look Up ‘s first two days because of a glitch.

Either way, both films attracted strong numbers as the year-end holidays got underway in earnest.

Nielsen’s streaming ratings, which are delayed by four weeks, cover viewing on TV sets and don’t include content watched on computers or mobile devices. And they apply to the U.S. only.

Separately, Netflix numbers — which are more current and count hours instead of minutes — show that Don’t Look Up (350 million hours) is the streamer’s most viewed movie ever on its service in its  first 28 days behind R ed Notice (364 million hours).

At least two-thirds of Netflix customers are outside of the U.S.

Elsewhere on the Nielsen chart for the week of Dec. 20-26, holiday movies dominated. The top 10 streaming movies for the week of Dec. 13 to 19 are below ( see TV rankings here ). Original films are marked with an asterisk. Ratings include Apple TV+, Disney+, Hulu, Netflix and Prime Video.

‘Reality Bites’ TV Series in the Works at Peacock (Exclusive)

Netflix is advising its employees to be fiscally responsible, while facing a loss of subscribers that has sparked fears about the viability of streaming services.  The employee directive comes in an updated culture memo by the company Thursday. Under the “Judgment” section of the memo, Netflix tells employees to “spend our members’ money wisely” — phrasing that the company used in a 2018 letter to shareholders but has not formalized for staff until now.More from The Hollywood ReporterMarta Kauffman on the Inspiration of 'Grace and Frankie' and Her Hopes Amid a Shifting IndustryNorm Macdonald Shot Secret Final Netflix Stand-Up Special Before...
BUSINESS・3 DAYS AGO
Popculture

Netflix has canceled another one of its major shows, with this one getting the ax after only two seasons. Variety reports that hit sci-fi drama Raising Dion has been dropped by the streamer, following its recent season debut. The news seems to have been revealed by series star Sammi Haney, who shared the news with fans on Instagram. "Sad to say that Raising Dion is CANCELED [sic] Thank you for all of the amazing support we got from all of our wonderful fans!" Haney wrote, in part. "Season 2 was a success, equal to Season 1, even if just looking at how many people watched all of it and wanted a season 3!"
TV SERIES・19 DAYS AGO

Cannes: Lucy Hale Re-teams With ‘Hating Game’ Director on ‘Which Brings Me to You’

Pretty Little Liars and Ragdoll actress Lucy Hale will re-team with her The Hating Game director Peter Hutchings for the romantic comedy Which Brings Me to You. Hale plays Jane, a freelance journalist who hooks up with Will, a photographer, at a mutual friend’s wedding. But when the couple sneaks off for a quickie in the coatroom, they spend the next 24 hours sharing stories of their most embarrassing sexual encounters, first loves and romances heartwarming, hilarious and tragic. The film is adapted from the novel by Julianna Baggott and Steve Almond.More from The Hollywood ReporterAnton, Range Media Partners Strike Pact...
MOVIES・3 DAYS AGO
The Independent

Mark Hamill has revealed he lost thousands of followers on Twitter in the space of a few hours yesterday (25 April).While the exact reason for the exodus has not been confirmed, his tweet came shortly after it was announced that Elon Musk is set to purchase the social media platform in a deal worth $44bn.Since the news broke, many users of the site (including Jameela Jamil) have announced their intention to delete their accounts, owing to Musk’s reputation as a politically controversial figure. It is believed this could be the reason for Hamill’s loss in followers.“Weird. I just lost...
CELEBRITIES・20 DAYS AGO
ComicBook

After weeks of silence, Chris Rock has finally addressed his now-infamous incident with Will Smith at March's 94th Annual Academy Awards. During another sold-out show at Baltimore's Lyric Performing Arts Center on Friday, Rock directly referenced the slap, but only spent a second on it before moving on with his set.
BALTIMORE, MD・21 DAYS AGO
Hello Magazine

Kate Hudson has realized one of her dreams and has taken to Instagram to share the incredible news with her 15 million followers. Sharing two pictures of her looking casual in a pair of baggy dip-dyed trousers and a white tank top, and singing into a microphone, the actress announced a surprising career change.
CELEBRITIES・20 DAYS AGO

Once again, Disney (DIS) - Get Walt Disney Company Report is finding itself embroiled in a political quagmire owing to its support of the LGBTQ community, after Florida Gov. Ron DeSantis punished Disney for denouncing his “Don’t Say Gay Bill,” by seeking to revoke Disney World’s designation as a special tax district (which as we pointed out, is ultimately a meaningless gesture).
FLORIDA STATE・19 DAYS AGO
Entrepreneur

Dorsey, who was CEO of the company until November 2021, took to the platform to pen his thoughts on the new changes.
BUSINESS・19 DAYS AGO
Insider

From the gourmet meals and missions to the VIP perks and room with a droid, here's what the galactic experience was like — and why we'd do it again.
LIFESTYLE・20 DAYS AGO
Hello Magazine

Gwyneth Paltrow is a doting mom to two teenage children, Apple and Moses, who she shares with ex-husband Chris Martin. The family are notoriously private, but over the weekend the award-winning actress gave a rare insight into their upcoming plans - and how they are changing things up this year for Mother's Day.
FAMILY RELATIONSHIPS・19 DAYS AGO

She’s definitely embracing the Hawaii lifestyle, and now “NCIS: Hawai’i” star Vanessa Lachey is showing off her everyday surrounding to her Instagram followers. “Hawai’i = Home,” Vanessa Lachey declares in her latest social media post. The “NCIS: Hawai’i” star also shares a snapshot of her sitting in a breathtaking area in Hawaii.
HAWAII STATE・19 DAYS AGO
HipHopDX.com

Ice Cube returned from a trip to Morrison, Colorado last week where he performed at the historic Red Rocks Amphitheater alongside Cypress Hill, E-40 and Too $hort for the annual 420 on the Rocks show. Now presumably back at home in Los Angeles, the N.W.A legend has turned his attention...
MORRISON, CO・20 DAYS AGO
Popculture

Spring is always a big time for engagements and weddings, and two beloved internet personalities are the latest to update their relationship status. On April 18, Rachel "Seltzer" Quirico revealed she and longtime boyfriend Trevor "TorcH" Housten were tying the knot after 17 years together. Both of them are beloved figures in the esports world, with Seltzer notably starring in the Syfy reality show WCG Ultimate Gamer. She's also hosted numerous esports tournaments and events for TV/streaming outlets; she also made a recent appearance on G4 TV's Boosted.
RELATIONSHIP ADVICE・20 DAYS AGO
HipHopDX.com

Too $hort has worked with a score of legendary producers throughout his almost 40-year career, from Jermaine Dupri and Lil Jon to Daz Dillinger and DJ Pooh. But one big-name beatsmith he passed up the opportunity to work with was Kanye West. During a recent interview with VladTV, the Bay...
CELEBRITIES・19 DAYS AGO
The Hollywood Reporter

If you purchase an independently reviewed product or service through a link on our website, The Hollywood Reporter may receive an affiliate commission. The best gifts for men aren’t always socks, ties or a new set of tools. A thoughtful spin on classic categories can impress every type of recipient — think cool cookware for the streetwear aficionado, or dad shoes that don’t scream “dad shoes.”More from The Hollywood ReporterSelena Gomez's Colorful New Cookware with Our Place Is Fit For Stylish ChefsThe Best Men's Denim Jackets, From Oversized Fits to Classic TruckersThe Best Waterproof Mascaras That Hollywood Makeup Artists Swear By On...
LOS ANGELES, CA・3 DAYS AGO
Insider

Depp said he discovered Disney would not recast him in "Pirates" days after Amber Heard's Washington Post op-ed article was published.
FAIRFAX, VA・20 DAYS AGO
The Hollywood Reporter

Spotify is revamping its internal podcast structure with the creation of new divisions led by Bill Simmons and Max Cutler, the company said on Thursday. Simmons will become Spotify’s head of global sports content and is tasked with growing and leading the audio giant’s sports content and strategy outside of the U.S. Simmons will continue to serve as the managing director of The Ringer, which was acquired by Spotify in 2020, and report up to Julie McNamara, Spotify’s head of talk studios.More from The Hollywood ReporterParadiso Media Podcast Network Signs With CAA (Exclusive)George Clooney's Smokehouse Pictures Strikes Development Deal With Audible (Exclusive)Former 'GMA'...
BUSINESS・3 DAYS AGO
Complex