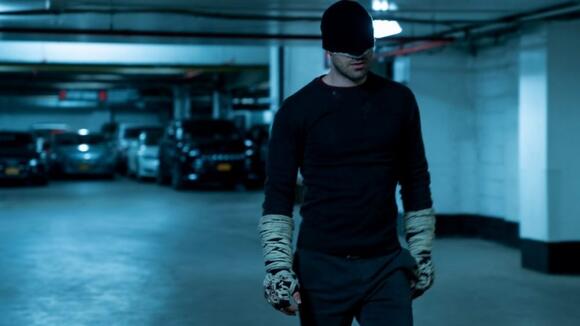 Marvel’s Daredevil appears to be making a comeback, three years after its cancellation by Netflix , ranking at No. 8 on Nielsen ’s weekly U.S. streaming chart of originals for the period of Dec. 20-26.

The series has sparked new interest following the recent cameo of Matt Murdock, aka Daredevil, played by Charlie Cox, in Spider Man: No Way Home . Additionally, Murdock’s arch-nemesis, Kingpin, played by Vincent D’Onofrio was revealed as a key part of Disney+’s Hawkeye storyline that week.

Daredevil , starring Charlie Cox, Vincent D’Onofrio and Deborah Ann Woll, received five Emmy nominations over its three-season run. The series centered on Matt Murdock (Cox), a blind lawyer by day and vigilante by night, who fought the crime of New York as Daredevil.

Written by Drew Goddard, Daredevil was executive produced by Erik Oleson, Jeph Loeb, Drew Goddard and Jim Chory. The series was produced by Marvel TV in association with ABC Studios for Netflix.

Disney+ Will Have Fewer Commercials Than Hulu, But Buyer Demand Is “Extraordinary”, Ad Chief Rita Ferro Says; Netflix And Other Newcomers Should Note “It Isn’t Easy”

Click here to read the full article. Rita Ferro, president of ad sales for Disney, said the forthcoming ad-supported tier of Disney+ will have a less “robust” amount of ads compared with Hulu. That disparity, at least initially, will mainly be because about 65% of subscribers come to the streaming service for movies, which don’t lend themselves to commercial interruption. “Movies are the reason people come to the platform, and movies have a different ad load,” she explained. The family-friendly nature of Disney+ will also limit the scope to “four-quadrant” advertisers. Disney last evening hosted its upfronts pitch to advertisers and...
NFL・1 DAY AGO
Deadline

Click here to read the full article. CBS has unveiled its fall schedule and while there’s a few changes, it’s largely business as usual. New drama series So Help Me Todd is getting a Thursday night slot, taking over an hour that was previously dominated by comedies including the canceled B Positive. Fire Country, starring Seal Team’s Max Thieriot, gets the Friday 9pm slot that was previously inhabited by Magnum P.I., Wednesday goes full alternative with The Real Love Boat while CSI: Vegas moves from Wednesday to Thursday, replacing Bull. New series East New York gets a Sunday night debut at 9pm,...
TV SERIES・1 DAY AGO
Deadline

Click here to read the full article. Amazon Prime Video’s Reacher will see a familiar face as Maria Sten returns for the action series’ second season. Months after the streamer picked up the Alan Ritchson-fronted series for Season 2, Prime Video shared that Sten will reprise her role of Frances Neagley. Ritchson, who stars as Jack Reacher, revealed on Wednesday that the upcoming chapter seeks to cover Lee Child’s Bad Luck and Trouble, the 11th book in the Jack Reacher series. The first season was based on Child’s Killing Floor. From writer and showrunner Nick Santora, the series follows Jack Reacher, a...
NFL・1 DAY AGO
Popculture

Once again, Disney (DIS) - Get Walt Disney Company Report is finding itself embroiled in a political quagmire owing to its support of the LGBTQ community, after Florida Gov. Ron DeSantis punished Disney for denouncing his “Don’t Say Gay Bill,” by seeking to revoke Disney World’s designation as a special tax district (which as we pointed out, is ultimately a meaningless gesture).
FLORIDA STATE・23 DAYS AGO
Insider

Depp said he discovered Disney would not recast him in "Pirates" days after Amber Heard's Washington Post op-ed article was published.
FAIRFAX, VA・24 DAYS AGO
Popculture

One of the stars of This Is Us is on the move to a new network in advance of the show's series finale. Deadline reported in March that Chris Sullivan, who plays Toby on the NBC series, will headline a comedy pilot for ABC. His new show is set to be titled The Son In Law.
TV SERIES・23 DAYS AGO
Hello Magazine

Gwyneth Paltrow is a doting mom to two teenage children, Apple and Moses, who she shares with ex-husband Chris Martin. The family are notoriously private, but over the weekend the award-winning actress gave a rare insight into their upcoming plans - and how they are changing things up this year for Mother's Day.
FAMILY RELATIONSHIPS・23 DAYS AGO

After weeks of silence, Chris Rock has finally addressed his now-infamous incident with Will Smith at March's 94th Annual Academy Awards. During another sold-out show at Baltimore's Lyric Performing Arts Center on Friday, Rock directly referenced the slap, but only spent a second on it before moving on with his set.
BALTIMORE, MD・25 DAYS AGO
IndieWire

Click here to read the full article. Nearly 50 years after the original “Rocky” hit theaters, the classic boxing franchise keeps getting up off the mat. Ryan Coogler breathed new life into the series with 2015’s “Creed,” which followed Sylvester Stallone’s Rocky Balboa as he trained a young boxer named Adonis (Michael B. Jordan), the son of his late rival Apollo Creed. The film earned strong reviews for taking the franchise in a modern direction while maintaining what people loved about the original films, and sequels were quickly planned. When “Creed II” was released in 2018, it cemented Michael B. Jordan’s...
MOVIES・25 DAYS AGO
Deadline

Click here to read the full article. Bass Reeves, a previously announced limited series produced by Yellowstone co-creator Taylor Sheridan, will now be an offshoot of Yellowstone prequel 1883 at Paramount+. The news was revealed as part of MTV Entertainment Studios’ upfront on Wednesday. Now titled 1883: The Bass Reeves Story, the limited series stars Emmy-nominated David Oyelowo as Reeves, a legendary lawman of the Wild West. Known as the greatest frontier hero in American history, and also believed to be the inspiration for The Lone Ranger. Reeves worked in the post-Reconstruction era as a federal peace officer in the Indian...
NFL・1 DAY AGO

Click here to read the full article. Elon Musk said overnight that his $44 billion acquisition of Twitter can’t move ahead unless the company backs up statements about the number of fake accounts on the platform, which the company has put at under 5%. It’s something he’s been picking at for days but made explicit in a tweet early Tuesday as some estimates put the number of spam accounts at 20%. “20% fake/spam accounts, while 4 times what Twitter claims, could be *much* higher. My offer was based on Twitter’s SEC filings being accurate. Yesterday, Twitter’s CEO publicly refused to show proof...
NFL・2 DAYS AGO
PopCrush

90 Day Fiancé: Before the 90 Days star Johnny Chao is showing off a new look on social media. The reality TV star rocked a fresh-faced look on the show. However, Chao debuted some new facial hair in his most recent post on Instagram. More specifically, he grew a beard and mustache.
TV & VIDEOS・23 DAYS AGO
Complex

Benzino is once again airing out some family business. After previously calling 50 Cent the “first hip-hop rat,” and getting into various other conflicts with his daughter Coi Leray, the rapper has now name-dropped both of them in a Twitter tirade. On Sunday, Fif took to Instagram to...
CELEBRITIES・24 DAYS AGO
Deadline

Click here to read the full article. Stark political divisions in the U.S. have caused a surge in TV ad spending, with primary races in Ohio, Pennsylvania and other key states pointing to a massive haul in the upcoming fall midterms. One key beneficiary of that influx of cash is Sinclair Broadcast Group, the No. 2 owner of local TV stations in the U.S. The company’s CEO, Chris Ripley offered his outlook on political ads and other topics in an appearance at the MoffettNathanson 9th Annual Media and Communications Summit. “Some of these primary races are crazy,” Ripley said. He cited Ohio,...
NFL・11 HOURS AGO
Deadline

Click here to read the full article. Top Gun: Maverick’s Cannes Film Festival premiere marks another high point in the movie star career of Tom Cruise. The actor turns 60 on July 3, and unlike most leading men of that age who become quicker to call for the stunt double, Cruise shows little evidence of slowing down after 43 films. If anything, his Mission: Impossible stunts seem to grow more ambitiously dangerous, not to mention the fact that he and director Doug Liman will become the first to actually shoot a space film in space for real—aboard one of Elon...
MOVIES・2 DAYS AGO
Popculture

Spring is always a big time for engagements and weddings, and two beloved internet personalities are the latest to update their relationship status. On April 18, Rachel "Seltzer" Quirico revealed she and longtime boyfriend Trevor "TorcH" Housten were tying the knot after 17 years together. Both of them are beloved figures in the esports world, with Seltzer notably starring in the Syfy reality show WCG Ultimate Gamer. She's also hosted numerous esports tournaments and events for TV/streaming outlets; she also made a recent appearance on G4 TV's Boosted.
RELATIONSHIP ADVICE・24 DAYS AGO