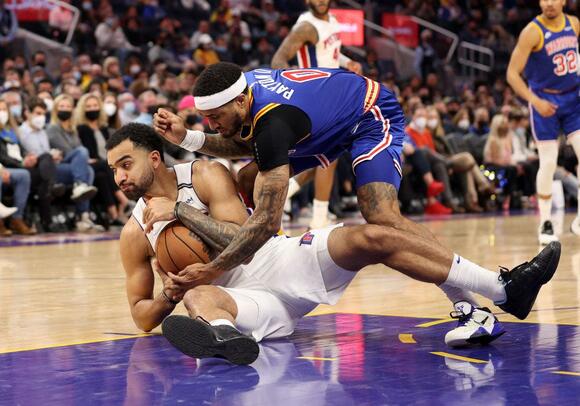 All 30 NBA teams had their chance to pick up Gary Payton II off the waiver wire shortly before the season started. But GP2 has found a perfect home with the Golden State Warriors, who helped pioneer the positionless basketball phase sweeping through the game.

The Warriors signed Payton to a non-guaranteed deal on opening night and he’s ascended from 15th man to crucial role player for the Dubs. Golden State president of basketball operations/general manager Bob Myers joined 95.7 The Game’s “The Morning Roast” for his bi-weekly appearance Tuesday to discuss Payton’s huge impact and more. Check out the full interview below:

“He just helps you win,” Myers told hosts Joe Shasky and Bonta Hill. “He’s analytically off the charts and that’s part of showing how much value he brings to our team. Defensively, he’s one of the best defenders in the NBA. I really believe that. If he stays healthy and gets the minutes, there’s no reason why he can’t be an All-Defensive player in the NBA. He’s always had that skill. He’s getting the minutes now.”

Payton, 29, bounced around the league on three different teams from 2016-20 after being labeled a ‘tweener as an undrafted player out of Oregon State.

“I think Payton suffered that label to his own detriment,” Myers said. “It’s not his fault. Like, ‘Oh, he’s not a point guard.’ So what? I think it’s finally come to a place where we’re all figuring that out. Good for Gary. He’s a basketball player.”

Steph Curry joked earlier this season that Payton is the tallest 6-foot-3 dude he has ever played with. Payton is the team’s top lob threat until James Wiseman returns and was even matched up with Denver Nuggets big man Nikola Jokic on a couple possessions earlier this year. He's often seen at the top of the key setting screens like a big man.

Myers thinks the Warriors’ success with their roster makeup – the 2015 death lineup comes to mind – throughout the years has helped usher in an era of positionless basketball.

“Curry got labeled as that early. ‘Tweener’ was a bad thing,” Myers said. “I think Draymond Green helped change that. ‘What position does he play? We can’t draft this guy! What is he?!’ Now, it’s totally different. Now, it’s, this guy can be a 5, he can be a 4, at some points Draymond was a 3 earlier in his career. We’ve got Payton playing 4 sometimes. It doesn’t matter.

'The Morning Roast' talks smack with 'Shan & RJ' ahead of WCF

Bonta Hill and Joe Shasky of 95.7 The Game’s “The Morning Roast” talked smack with 105.3 The Fan’s “Shan & RJ” from Dallas ahead of Wednesday’s Warriors-Mavericks Western Conference Finals.
SAN FRANCISCO, CA・2 DAYS AGO
95.7 The Game

After becoming one of five NBA players to appear in all 82 regular season games, Kevon Looney’s epic 22-rebound performance is a reminder of his value to the Warriors.
SAN FRANCISCO, CA・2 DAYS AGO
The Big Lead

Luka Doncic and Jason Kidd shared their thoughts on the Warriors defense after Golden State dominated in a 112-87 win over the Mavericks in Game 1 of the Western Conference Finals.
SAN FRANCISCO, CA・1 DAY AGO
Yardbarker

I just saw a post-spring game college football Top 25 poll (thank you!) and there were three teams from the Pac-12 in the top 15. That is pretty good for any conference, let alone the most maligned Power 5 league in the land. The amazing thing about that ranking was...
COLLEGE SPORTS・24 MINUTES AGO