After 2-month trek from Central America, Pakistani migrant finds himself in U.S. custody 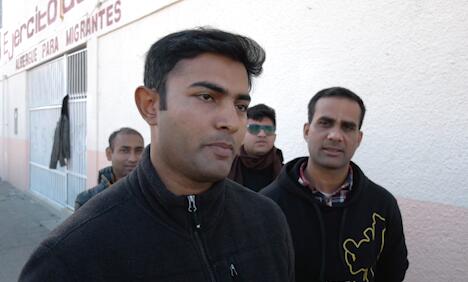 CALEXICO, California ( Border Report ) — After a two-month trek through Central America and Mexico, Nabeel Younis has finally made it to the U.S., albeit in federal custody and under quarantine.

Other than that, friends and family of the Pakistani national don’t know much about his condition or well-being inside the Imperial Regional Detention Facility in Calexico, California.

“They are controlling access and it’s very unfortunate, it’s not the way this country was built, that’s for sure,” said Fitzgerald Kelly, a friend of Younis’.

Kelly told Border Report he has known Younis for about five years and the two have traveled together.

He also said that a few days ago, he had a chance to speak with the 27-year-old Younis by phone.

“I could barely make out what he was saying, but he told me he was in quarantine and after two weeks he would get a hearing of some sort,” Kelly said.

Typically, since the coronavirus pandemic began, most migrants who are detained after being apprehended for illegally crossing the border, have to be isolated to make sure they don’t have the COVID-19 virus.

After that time frame, they are given an opportunity to begin their asylum cases.

Younis told Border Report last week he wishes to seek asylum in the U.S. and that’s why he originally left Pakistan in the first place.

That was three years ago when he and a group of friends attended an event for Pope Francis in Panama.

They stayed and never went back home.

“Pakistan is 97 percent Muslim, the Muslims in Pakistan are really quite oppressive of everyone who is not a Muslim,” said Kelly. “He’s been motivated for a long time about his search for a place where he can actually act as a Christian number one, and also be free.”

After his time in Panama, Younis and some friends left for the U.S. in November.

A few weeks later they arrived in Tijuana but were arrested and sent to an immigration detention facility just south of the border.

“We were arrested by federales and I was in jail for almost a month,” Younis told Border Report.

Younis was then released and sent to a shelter in Tijuana, where he contemplated his next move.

He and his friends decided to set off for the border between Calexico and Mexicali, Mexico about 120 miles east of San Diego.

They made it over the border barrier but were apprehended north of the border.

Younis has been at the Imperial Regional Detention Facility, which is run by U.S. Immigration and Customs Enforcement, ever since. His friends’ whereabouts are unknown.

“He is strong, he is smart, he wants to become educated and wants to be in the medical field,” said Kelly. “He’s what this country needs.”

Border Report reached out to ICE last week, seeking to arrange an on-camera interview with Younis. Four days later, a media representative reached out stating they were looking into it. On Wednesday morning, ICE said it would not happen until next week, but only by phone.

And details about Younis’ case are also not being made public.

Visit the BorderReport.com homepage for the latest exclusive stories and breaking news about issues along the United States-Mexico border.

Kelly said he and others are in the process of hiring an attorney to represent Younis.

Border Report will continue to follow Younis’ case as it moves forward.

"Someone actually whispered to me while I was sitting in a car, 'I know where your dad is.'"
WAVERLY, OH・2 DAYS AGO
WLNS

A white supremacist group leader will be spending a few years behind bars following being found guilty of multiple charges
LANSING, MI・2 DAYS AGO
WLNS

Michiganders are still almost evenly split when it comes to their feelings on Governor Gretchen Whitmer. That’s according to the results of a poll commissioned for WLNS-TV. When asked how they feel about the job the first-term governor is doing, 47% give her positive marks, while 52% rate her negatively. When asked how they view […]
MICHIGAN STATE・2 DAYS AGO
Daily Beast

Sen. Ted Cruz (R-TX) abruptly walked off from a British journalist’s questions about gun violence in America two days after an elementary school massacre in his state left 19 children and two adults dead. Cruz, who is due to appear at a National Rifle Association convention this weekend, became...
CONGRESS & COURTS・5 HOURS AGO

"After Ukraine, if we're given the command, in six seconds we'll show you what we're capable of," Chechen leader Ramzan Kadyrov said.
POLITICS・1 DAY AGO
US News and World Report

WASHINGTON (Reuters) - The United States on Tuesday offered a reward of up to $10 million for information on six people it described as Russian military intelligence officers who had conducted cyber attacks affecting critical U.S. infrastructure. The six officers work in a cyber-focused unit of Russia's Main Intelligence Directorate...
PUBLIC SAFETY・29 DAYS AGO
WLNS

"We have to rearrange our values and find a common ground above this devastating American reality that has tragically become our children's issue," the actor wrote on Twitter.
UVALDE, TX・1 DAY AGO
WLNS

Carbon monoxide poisoning was determined to be the cause of death for three Americans found dead at a Sandals resort in the Bahamas, according to a new report.
MIAMI, FL・2 DAYS AGO

Ionia Public Schools (IPS) has issued a statement regarding an incident that occurred on school grounds on Thursday afternoon.
IONIA, MI・2 HOURS AGO
WLNS

Boating safety: 6 things to know before hitting the lake

As West Michigan observes Memorial Day Monday, many boaters will be hitting the lake this weekend, possibly for the first time this season.
MICHIGAN STATE・2 DAYS AGO
WLNS

The lawsuit against Chris and Roberta Laundrie, claiming they were aware their son had murdered Petito, now has an initial witness list.
SARASOTA COUNTY, FL・2 DAYS AGO
WLNS

“Died prior to the date of signing”: Report finds 68,000 invalid signatures

According to the FBI search-warrant application - unsealed in the Southern District of Ohio - the man said the plan was to get revenge for the U.S.' 2003 invasion of Iraq.
POTUS・2 DAYS AGO
WLNS

LANSING, Mich. (WLNS) – The Lansing Police Department is asking for your help solving a 2012 cold case murder and finding two people who are wanted with felony warrants. CASE ONE: The Lansing Police Department is investigating the homicide of Lavoris Tinisha Watkins. On December 22, 2012, police responded to a burglary complaint at the […]
LANSING, MI・19 HOURS AGO
WLNS

CBS says it will still air the season finales of its other "FBI" installments, "FBI: Most Wanted" and "FBI: International," on Tuesday.
UVALDE, TX・1 DAY AGO
WLNS

Uvalde third-grader Joevonni Gomez is grappling with emotions even adults are trying to understand.
UVALDE, TX・8 HOURS AGO

LANSING, Mich. (AP) — A federal appeals court on Wednesday dismissed a Catholic school’s challenge to Michigan’s 2020-21 mask order. The Whitmer administration policy during the COVID-19 pandemic was dropped about a year ago, making the lawsuit moot, the court said. The appeal was heard by 17 judges at the 6th U.S. Circuit Court of […]
LANSING, MI・1 DAY AGO
The Guardian

Texas department of public safety briefing creates more questions than hours about hour gunman was in school but not confronted by officers
UVALDE, TX・25 MINUTES AGO
WLNS

A warning before hitting the water: make sure you know what type of gas you’re putting in your engine.
GRAND RAPIDS, MI・2 DAYS AGO