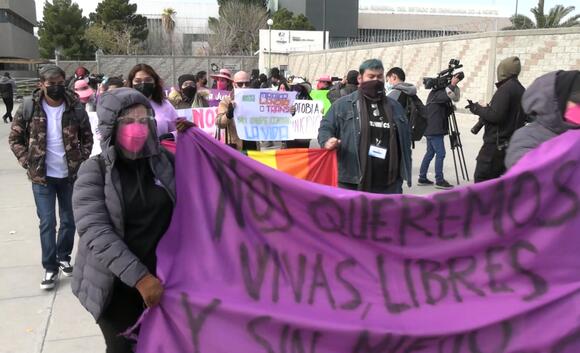 JUAREZ, Mexico (Border Report) – Women’s rights and LGBT activists took to the streets of Juarez on Thursday, demanding answers in the murder and dismemberment of a lesbian couple last Sunday.

Activists said Medina and Martinez married last year and were raising Medina’s three children. Initial news reports from Juarez said the women were from El Paso, but state police officials on Thursday told Border Report that Medina was originally from Juarez and Martinez from El Sauzal, Chihuahua, a community along the highway where the body parts were found.

“The authorities are blind towards what is happening. In addition to the widespread violence from drug trafficking, there’s also violence against LGBT people for being LGBT,” said Miguel Angel Jacome, who participated in Thursday’s protest in front of the state police building in Juarez and in the march that followed.

Dozens of transgender migrants arrive at border, want asylum in US

Demonstrators held signs saying, “Sorry for the inconvenience, but we’re being killed” and “I don’t want to feel brave going out, I want to feel safe.” Participants also carried rainbow flags and a large purple banner with black letters stating “We want to be alive, free and without fear.”

More than 500 women have been murdered in Juarez in the past three years, including 172 last year. Mexican police said most of those homicides were drug-related.

“There’s obviously a situation of hate towards women and that is something that for all the women here in Juarez worries us,” said Eliana Treviño, a women’s rights advocate and a participant in Thursday’s march.

“In this case, the lines of investigation are linked to the economic activity that both victims were engaged in, and the persons with which they interacted in that environment,” the AG’s Office said in a statement to Border Report.

This is not the first time criminals leave body parts along the Juarez-Porvenir and other roads in an area known as the Juarez Valley, across the border from Socorro, Fabens, Tornillo and Fort Hancock, Texas. Mexican authorities in the past have attributed the dismemberment to drug cartels trying to intimidate rivals.

Fierro vowed his office would conduct an objective investigation. “Justice applies equally to all, and we have made much progress in this investigation. We’re following various leads, but a hate crime this is not,” he said in the statement.

Still, the activists say too many women are being killed in Juarez during sex assaults and as the result of domestic violence.

“So far this year, one woman has been murdered here every 45 hours,” said Maritza, a spokeswoman for the groups that organized Thursday’s march. “We demand an end to the violence and that authorities make good on their duty to guarantee the safety of all citizens, men and women, (gay) or straight.”

Mexican officials are reporting the capture of a La Linea cartel lieutenant believed to be behind the Good Friday massacre of six people on a highway near the U.S. border.
EL PASO, TX・27 DAYS AGO
Border Report

Mexican exiles in El Paso are breathing a little easier after learning that the convicted drug kingpin responsible for their flight has been moved from Juarez to a prison in southern Mexico.
EL PASO, TX・4 DAYS AGO
Border Report

Police in Juarez, Mexico, say they have seized the vehicle of the driver who drove past a border checkpoint and was fired at by U.S. federal officers last week at the Bridge of the Americas port of entry.
EL PASO, TX・7 DAYS AGO
Border Report

Police in Alabama say a South Carolina truck driver has confessed to killing a woman who disappeared 21 years ago and to hiding her body in a suitcase. Police in Bessemer, Alabama told news outlets that South Carolina native Brian Jones traveled back to Alabama last month and admitted to killing 41-year-old Janet Luxford in 2001. He then led investigators to a green suitcase with bones inside, police said.
BESSEMER, AL・27 DAYS AGO
Daily Mail

This is the surreal moment 21 migrants were found concealed inside two wooden crates during a traffic stop in Texas. The shocking findings took place April 6 when state troopers and U.S. Border Patrol agents pulled over a pickup truck and disrupted the human smuggling attempt in Laredo. Footage released...
LAW ENFORCEMENT・27 DAYS AGO
The Guardian

A sheriff in Florida arrested his own daughter on drug charges as his department continues its war on addictive substances. Franklin County Sheriff A.J. Smith gave a statement on April 19 confirming that his daughter, Kristen Kent, had been arrested under suspicion of meth trafficking two days prior. "Methamphetamine does...
FLORIDA STATE・27 DAYS AGO
Law & Crime

Jurors found a man guilty of all charges for murdering a woman he briefly dated. “I’m still alive,” Brandon Roberts, 29, yelled Tuesday as judicial marshals took him from that courtroom in Bridgeport, Connecticut, according to The Connecticut Post. He shot therapist Emily Todd, 25, in the back...
27 DAYS AGO
Reason.com

How was a man in a Louisiana prison who was supposed to be on suicide watch allowed to smoke insecticide, leading to his death?. That's the question Jennifer Bartie wants answered. The man was her son, 37-year-old Javon Kennerson, who died in December 2020 several weeks after falling into a sudden and severe mental health emergency.
PUBLIC SAFETY・28 DAYS AGO
Newsweek

One man has been arrested after the bear was trapped under the wheel of a tractor and tied to an earth mover.
PUBLIC SAFETY・27 DAYS AGO

Bodycam footage captured the snake slithering around the room as an officer attempted to capture it.
BOYNTON BEACH, FL・27 DAYS AGO
CBS News

A 60-year-old man who has been charged in the January 6 insurrection at the Capitol has been identified as the son of a fames American artist. Vincent Gillespie, who has been in a legal battle against his stepmother to gain control of paintings by his father, Gregory Gillespie, was arrested in February on charges relating to the Capitol riot.
27 DAYS AGO
Border Report

Border agents at an El Paso port of entry on Monday mixed dialogue with a show of force to persuade a group of migrants to keep walking back to Mexico.
EL PASO, TX・20 DAYS AGO
Border Report

A request by U.S. Customs and Border Protection for public input on environmental concerns regarding nearly 70 miles slated for border wall construction in the Laredo, Texas, area is really a way for the Biden administration to slow down the building process, a South Texas congressman recently told Border Report.
LAREDO, TX・14 DAYS AGO
rolling out

A 14-year-old Black teen with autism was attacked by New York police officers while he was waiting for his siblings to finish checking out at a Target store on April 18. Video shows the Black teenage boy being tackled to the ground by deputies. His sister can be heard in the background yelling “Get off of my brother! What are you doing?”
LAW ENFORCEMENT・27 DAYS AGO
The Independent

A first-class passenger on an Arizona-bound Delta Airlines plane was arrested for allegedly using homophobic slurs against a flight attendant and physically assaulting the crew member for not serving him a drink.Christopher Alexander Morgan allegedly threw a glass of ice and an onboard telephone at the flight attendant for refusing to continue serving alcohol to him.Mr Morgan was arrested when flight 2908 touched down at the Phoenix Sky Harbor International Airport on 22 April and is facing charges of interference with flight crew members, which can be punishable with up to 20 years in prison.The passenger called the flight...
PUBLIC SAFETY・27 DAYS AGO
Border Report

132 migrants removed from U.S. on ICE flight back to Guatemala

An early morning deportation flight carrying 132 migrants who were sent back to Guatemala on Tuesday from South Texas was highlighted by the Biden administration, which allowed media rare access to the tarmac where the asylum seekers were shackled and chained as they boarded the flight.
HARLINGEN, TX・6 DAYS AGO
Border Report

Migrants willingly left their tents on Monday night as they evacuated a camp in downtown Reynosa, Mexico, a Catholic nun who oversees volunteer operations for asylum seekers told Border Report on Tuesday, despite reports the migrants were forcibly evicted.
MCALLEN, TX・19 DAYS AGO