4 people, including infant, freeze to death being smuggled across US-Canada border 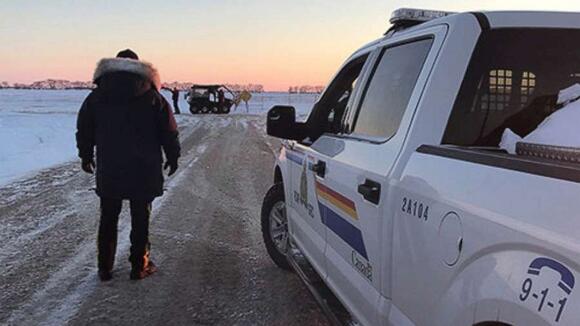 Four people, including two adults, a teen and an infant, have been found frozen to death about 40 feet from the U.S.-Canada border while being smuggled into North Dakota, according to U.S. and Canadian authorities.

U.S. Customs and Border Protection officers and law enforcement officers with the Department of Homeland Security performed a traffic stop Jan. 19 on a 15-passenger van about 1 mile from the border when they found two undocumented Indian nationals from Canada inside, according to the Manitoba Royal Canadian Mounted Police.

Less than a quarter mile away from the border, law enforcement encountered and apprehended five additional undocumented Indian nationals that walked across the U.S. border from Manitoba, Canada, according to the RCMP.

One of the travelers who was taken into custody was carrying a backpack containing children's items, such as clothes, diapers and toys, according to the U.S. Department of Justice. He told authorities he was carrying the backpack for a family that was traveling with their group but got separated from them as they traveled to the border during the night.

The Royal Canadian Mounted Police, coordinating with the U.S. Customs and Border Protection, began a search on both sides of the border for additional travelers when they found the bodies of four individuals on the Canadian side of the border in Manitoba.

The adult male, adult female, teen male and infant were found "frozen," according to Canadian authorities, and are believed to have died due to exposure.

The DOJ said, according to the group of travelers, the border crossing took an estimated 11 hours. Two of the travelers were transported to a hospital with serious injuries, the DOJ said.

The low temperature in Emerson, Manitoba, which is at the U.S.-Canada border, dipped to minus 13 degrees Fahrenheit on Wednesday.

Steve Shand, 47, a U.S. citizen from Florida who was driving the van, was arrested by U.S. Border Patrol and charged with one count of knowing or in reckless disregard of the fact that an alien had come to, entered, or remained in the United States in violation of law, having transported and moved or having attempted to transport and move such aliens, according to the U.S. Department of Justice.

Shand made his first court appearance Thursday and is due back in court on Jan. 24. He is currently being held in custody in Grand Forks County in North Dakota.

An autopsy will be conducted to determine cause of death of the victims. The four travelers who died have not yet been identified.

The Mounted Police said it plans to continue searching for any additional people who may have been illegally crossing the border.

This is the surreal moment 21 migrants were found concealed inside two wooden crates during a traffic stop in Texas. The shocking findings took place April 6 when state troopers and U.S. Border Patrol agents pulled over a pickup truck and disrupted the human smuggling attempt in Laredo. Footage released...
LAW ENFORCEMENT・22 DAYS AGO
Fox News

A sheriff in Florida arrested his own daughter on drug charges as his department continues its war on addictive substances. Franklin County Sheriff A.J. Smith gave a statement on April 19 confirming that his daughter, Kristen Kent, had been arrested under suspicion of meth trafficking two days prior. "Methamphetamine does...
FLORIDA STATE・21 DAYS AGO
Nashville News Hub

High-ranking corrections official who moved two Black pretrial detainees into the same cell row as white supremacist inmates and unlocked their cells so they can be attacked has been convicted, AAG said

The FBI also seized financial records and fine art in the October 2021 raids on properties linked to billionaire Oleg Deripaska, per Bloomberg.
WASHINGTON, DC・21 DAYS AGO

The intelligence the U.S. shared with Ukraine helped it continue to resist Russian invading forces and even shoot down a transport plane carrying hundreds of Russian troops, a new report revealed. According to current and former U.S. officials who spoke with NBC News on Tuesday, the U.S. provided critical intelligence...
MILITARY・21 DAYS AGO
Fortune

Sign up for the Fortune Features email list so you don’t miss our biggest features, exclusive interviews, and investigations. Two Russian oligarchs found dead alongside their families within 48 hours of each other are the latest high-profile executives to die in mysterious circumstances since the beginning of the year.
PUBLIC SAFETY・22 DAYS AGO
USA TODAY

The Centers for Disease Control and Protection announced in April that the Title 42 would be rescinded on May 23.
LOUISIANA STATE・22 DAYS AGO
CBS News

A 60-year-old man who has been charged in the January 6 insurrection at the Capitol has been identified as the son of a fames American artist. Vincent Gillespie, who has been in a legal battle against his stepmother to gain control of paintings by his father, Gregory Gillespie, was arrested in February on charges relating to the Capitol riot.
ATHOL, MA・21 DAYS AGO

One man has been arrested after the bear was trapped under the wheel of a tractor and tied to an earth mover.
PUBLIC SAFETY・21 DAYS AGO
NBC News

MEXICO CITY — Mexican President Andrés Manuel López Obrador on Monday urged U.S. Latinos not to vote in November’s midterm elections for politicians who have “mistreated” them, in response to a comment by former U.S. President Donald Trump. Trump boasted at a rally in...
PRESIDENTIAL ELECTION・21 DAYS AGO
Business Insider

A plethora of downright bizarre scientific research from the Department of Defense previously kept under wraps has been uncovered, revealing an array of peculiar schemes proposed by the United States military. One outlandish proposal suggested detonating nuclear bombs on the moon to create a tunnel through it. Millions in taxpayer dollars were spent on the research, which appears to have relied on a contractor, Bigelow Aerospace Advanced Studies, which was owned by multi-millionaire Robert Bigelow, a hotel impresario. The public was kept in the dark until now regarding what research was being funded.
ASTRONOMY・21 DAYS AGO

The former F-35 test pilot Billie Flynn told The Aviationist that moving to the "cosmic spaceship" that is the F-35 was too much to ask of MiG pilots.
AEROSPACE & DEFENSE・22 DAYS AGO
Newsweek

The mother has questioned whether the soldiers would let her son live even if she did send the money.
MILITARY・22 DAYS AGO
US News and World Report

WASHINGTON (Reuters) - The United States on Tuesday offered a reward of up to $10 million for information on six people it described as Russian military intelligence officers who had conducted cyber attacks affecting critical U.S. infrastructure. The six officers work in a cyber-focused unit of Russia's Main Intelligence Directorate...
PUBLIC SAFETY・21 DAYS AGO
Fox News

A superyacht worker claims the vessel’s captain once had to deploy sonic weapons against Kalashnikov-wielding pirates on inflatable boats in the Arabian Sea. The episode was one of many surreal scenes an anonymous worker detailed in a piece published Sunday in The Times of London. The captain, according to...
PUBLIC SAFETY・22 DAYS AGO
The Independent

A first-class passenger on an Arizona-bound Delta Airlines plane was arrested for allegedly using homophobic slurs against a flight attendant and physically assaulting the crew member for not serving him a drink.Christopher Alexander Morgan allegedly threw a glass of ice and an onboard telephone at the flight attendant for refusing to continue serving alcohol to him.Mr Morgan was arrested when flight 2908 touched down at the Phoenix Sky Harbor International Airport on 22 April and is facing charges of interference with flight crew members, which can be punishable with up to 20 years in prison.The passenger called the flight...
PUBLIC SAFETY・21 DAYS AGO
Newsweek

The poster offered a solution for what someone should do should they see someone in the restroom they don't think matches the sign on the door.
RELIGION・22 DAYS AGO
Newsweek

Individual judges may not like the policy choices of the Biden administration, but it is not their job to weigh in on that policy debate.
TEXAS STATE・22 DAYS AGO
ABC7

With cases on the rise, LA County likely to move into CDC's 'medium risk' category this week