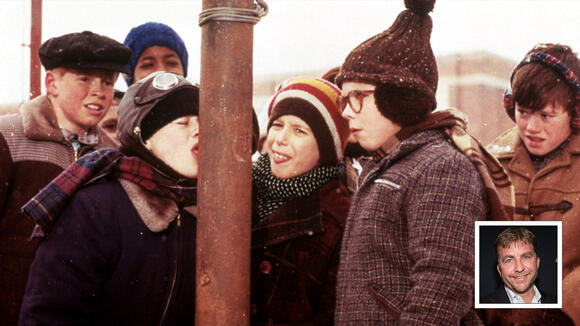 Christmas has come early for Legendary and Warner Bros.

The two companies are gearing up to make a sequel to the yuletide holiday classic, A Christmas Story , closing a deal for Peter Billingsley , the child star of the original 1983 movie, to topline and produce.

Titled A Christmas Story Christmas , the feature intended for HBO Max will be directed by Clay Kaytis, who already tackled the snowy holiday season with The Christmas Chronicles for Netflix and has a script by Nick Schenk, the writer behind recent Clint Eastwood movies such as Gran Torino and The Mule, sitting under the leg lamp.

While the original movie followed Ralphie, a nine-year old boy who desperately wanted a Red Ryder BB rifle and was set in 1940, the new story will take place in the 1970s and sees an adult Ralphie return to his house on Cleveland Street to deliver his kids a magical Christmas like the one he had growing up.

The studio is hoping to recreate the same real-life tone of the first movie to show the now-father reconnect with childhood friends, reconcile the passing of his Old Man, and callbacks to the initial film.

Billingsley, as an adult, has focused on a behind the camera career. He was a producer on the Broadway Musical adaptation of Christmas Story , which received three Tony nominations, as well as on Jon Favreau’s culinary-themed acting talk show Dinner for Five . He is also an exec producer with Vaughn on Netflix’s animated F is for Family and directed the Universal comedy Couple Retreat .

Kaytis began his career in the animation world, working on Disney’s Frozen and Wreck-It Ralph , and co-directed The Angry Birds Movie .

Billingsley is repped by attorney Mitch Smelkinson while Kaytis by UTA, Artists First, and Binder Weston. Schenk is repped by Management 360 and Lichter Grossman.

That's great, a Christmas story is my all time favorite. Every Christmas Eve I play the movie over and over for twenty four hours. My wife however is sick of it.😄😄

My favorite Christmas Movie. I watch it countless times around Christmas. Great movie tradition in our house......

Why??? And why now...it wouldn't be the same without the old man Darren McGavin and is the mom still alive?? Melinda Dillon

‘Three Thousand Years of Longing’ Star Tilda Swinton on Feature Films: “That Is My Flag, and I Fly It”

During the press conference for their movie Three Thousand Years of Longing on Saturday, George Miller and Tilda Swinton talked about their first meeting five years earlier at the festival. Both were attending the 70th iteration of the festival, which is this year celebrating its 75th edition, and met during dinner to celebrate the fest’s anniversary. “I sat next to someone I didn’t recognize and 15 minutes in I realized it was George Miller,” Swinton remembered. “We became friends quite quickly, but quite deeply. A year later, he had sent me a script.”More from The Hollywood ReporterNetflix Nabs Emily Blunt Package...
MOVIES・2 DAYS AGO
The Hollywood Reporter

“What a night,” Idris Elba told The Hollywood Reporter just after his feet touched down close to 10 p.m. Friday night inside La Mome Beach in Cannes, site of the after-party for George Miller’s Three Thousand Years of Longing. Elba stars opposite Tilda Swinton in the fairy tale, and he provided the pours for the party with his Porte Noire brand, which sponsored the event alongside Chanel and Bentley for Filmnation Entertainment, Metropolitan Filmexport, MGM and United Artists Releasing. It was quite a chic beach-set shindig, produced by Brilliant Consulting, and hosting Miller’s full cast, guests like Riz Ahmed and Yann...
LOS ANGELES, CA・1 DAY AGO
The Hollywood Reporter

Cannes Awards Analysis: What ‘Three Thousand Years of Longing’ and ‘Hunt’ Have Going for and Against Them

Critical reactions to Friday night’s Cannes Film Festival world premiere of George Miller’s Three Thousand Years of Longing spanned the spectrum. But regardless of how one feels about the quality of the movie — which tells the story of a scholar of story and mythology (Tilda Swinton) whose worldview is called into question when a djinn (Idris Elba) enters her life — it seems unlikely to be a major player come awards season. Though the Academy will occasionally bite at a whimsical fairy tale — see Hugo (2011), Beasts of the Southern Wild (2012) and Jojo Rabbit (2019) — this sort of film...
MOVIES・2 DAYS AGO
The Hollywood Reporter

The legendary director Irvin Kershner had zero patience for those who took issue with The Empire Strikes Back dark ending. The second chapter in the Star Wars trilogy, released this day in 1980, was quite gloomy compared to the conclusion of 1977’s A New Hope — and that is exactly how the late Kershner wanted it.More from The Hollywood ReporterKathleen Kennedy Says It's "Vital" Lucasfilm Move Away From Skywalker Saga, Will Stop Recasting Legacy Characters'Spider-Man' Director Jon Watts to Helm Coming-of-Age 'Star Wars' Disney+ SeriesThat Time George Lucas Accidentally (and Hilariously) Photobombed a Scientific Documentary In an unearthed interview alongside Empire producer...
MOVIES・2 DAYS AGO

Highland Film Group (HFG) has struck a partnership deal with BuzzFeed Studios that will see them develop, produce, acquire and distribute three to five feature films per year in the $5 million-$12 million range. Under the arrangement, BuzzFeed Studios will lead film production and creative, internally developing properties stemming from its IP, brands and audience data. All film will be released in the U.S. by HFG’s distribution arm The Avenue, with BuzzFeed Studios building marketing campaigns through its digital network. Highland Film Group will handle foreign distribution rights on select titles, and BuzzFeed will lean on its international editions to promote...
MOVIES・1 DAY AGO
Hello Magazine

Laughter erupted in courtroom after Johnny Depp said he doesn’t watch his own movies and couldn’t recall the question he was asked. “I don’t watch them. I feel better not watching them. What was the question again?” Mr Depp said to laughter from the room. Johnny Depp trial – latest updates“Order in the court, or I will have you removed,” Judge Azcarate said. “Understood? Thank you.”The defamation trial between Mr Depp and Amber Heard began on Monday 11 April in Fairfax, Virginia following Mr Depp’s lawsuit against his ex-wife in March 2019. Mr Depp is arguing that she defamed him...
CELEBRITIES・28 DAYS AGO
Popculture

Netflix has canceled another one of its major shows, with this one getting the ax after only two seasons. Variety reports that hit sci-fi drama Raising Dion has been dropped by the streamer, following its recent season debut. The news seems to have been revealed by series star Sammi Haney, who shared the news with fans on Instagram. "Sad to say that Raising Dion is CANCELED [sic] Thank you for all of the amazing support we got from all of our wonderful fans!" Haney wrote, in part. "Season 2 was a success, equal to Season 1, even if just looking at how many people watched all of it and wanted a season 3!"
TV SERIES・27 DAYS AGO

Depp said he discovered Disney would not recast him in "Pirates" days after Amber Heard's Washington Post op-ed article was published.
FAIRFAX, VA・28 DAYS AGO
Insider

From the gourmet meals and missions to the VIP perks and room with a droid, here's what the galactic experience was like — and why we'd do it again.
LIFESTYLE・28 DAYS AGO
HipHopDX.com

Too $hort has worked with a score of legendary producers throughout his almost 40-year career, from Jermaine Dupri and Lil Jon to Daz Dillinger and DJ Pooh. But one big-name beatsmith he passed up the opportunity to work with was Kanye West. During a recent interview with VladTV, the Bay...
CELEBRITIES・27 DAYS AGO
The Hollywood Reporter

Click here to read the full article. Nearly 50 years after the original “Rocky” hit theaters, the classic boxing franchise keeps getting up off the mat. Ryan Coogler breathed new life into the series with 2015’s “Creed,” which followed Sylvester Stallone’s Rocky Balboa as he trained a young boxer named Adonis (Michael B. Jordan), the son of his late rival Apollo Creed. The film earned strong reviews for taking the franchise in a modern direction while maintaining what people loved about the original films, and sequels were quickly planned. When “Creed II” was released in 2018, it cemented Michael B. Jordan’s...
MOVIES・29 DAYS AGO
SheKnows

Click here to read the full article. It seems like everyone was rooting for Renée Zellweger and Ant Anstead to get together, including an unexpected duo: the Property Brothers. Drew and Jonathan Scott recently revealed that they were the ones that ended up getting Zellweger and Anstead to meet, and subsequently fall in love. And their hard work ended up paying off! Back on April 14, 2022, the Scott brothers sat down with ExtraTV to talk about everything from Drew’s upcoming fatherhood to Jonathan loving GF Zooey Deschanel’s Vanity Fair gown. While we loved the entire interview, we’re losing it over...
CELEBRITIES・29 DAYS AGO
Hello Magazine

Gwyneth Paltrow is a doting mom to two teenage children, Apple and Moses, who she shares with ex-husband Chris Martin. The family are notoriously private, but over the weekend the award-winning actress gave a rare insight into their upcoming plans - and how they are changing things up this year for Mother's Day.
FAMILY RELATIONSHIPS・27 DAYS AGO
TheStreet

Once again, Disney (DIS) - Get Walt Disney Company Report is finding itself embroiled in a political quagmire owing to its support of the LGBTQ community, after Florida Gov. Ron DeSantis punished Disney for denouncing his “Don’t Say Gay Bill,” by seeking to revoke Disney World’s designation as a special tax district (which as we pointed out, is ultimately a meaningless gesture).
FLORIDA STATE・27 DAYS AGO
Outsider.com

She’s definitely embracing the Hawaii lifestyle, and now “NCIS: Hawai’i” star Vanessa Lachey is showing off her everyday surrounding to her Instagram followers. “Hawai’i = Home,” Vanessa Lachey declares in her latest social media post. The “NCIS: Hawai’i” star also shares a snapshot of her sitting in a breathtaking area in Hawaii.
HAWAII STATE・27 DAYS AGO
Outsider.com

“NCIS: Los Angeles” star Daniela Ruah absolutely killed it on the red carpet and stage last night at the International Portuguese Music Awards. While everyone at home was preparing for tonight’s “NCIS: Los Angeles” episode, Daniela Ruah was getting all dressed up to host the IMPA Awards. The ceremony took place at the Providence Performing Arts Center in Providence, Rhode Island, on Saturday, April 23.
LOS ANGELES, CA・29 DAYS AGO
Popculture

Spring is always a big time for engagements and weddings, and two beloved internet personalities are the latest to update their relationship status. On April 18, Rachel "Seltzer" Quirico revealed she and longtime boyfriend Trevor "TorcH" Housten were tying the knot after 17 years together. Both of them are beloved figures in the esports world, with Seltzer notably starring in the Syfy reality show WCG Ultimate Gamer. She's also hosted numerous esports tournaments and events for TV/streaming outlets; she also made a recent appearance on G4 TV's Boosted.
RELATIONSHIP ADVICE・28 DAYS AGO
The Hollywood Reporter