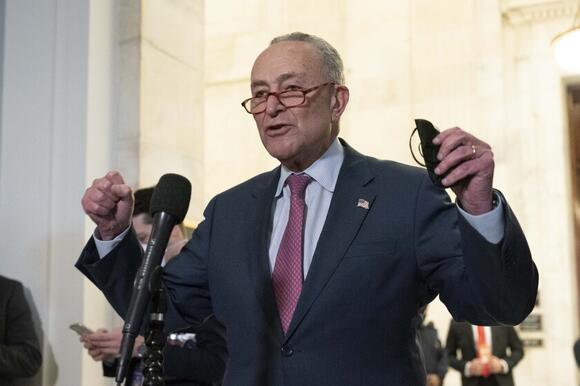 Senate Majority Leader Chuck Schumer said in an interview Thursday that Democrats “made progress” toward changing the Senate's filibuster rules to advance sweeping voting legislation , despite the dramatic collapse of the package that his party says is central to protecting democracy.

From his office overlooking the National Mall with portraits of the Roosevelts above his desk — Franklin D. on one side, Theodore on the other — Schumer took stock of what was widely seen as a striking setback for President Joe Biden on his first anniversary in office as the Democrats’ signature voting bill unraveled.

“If the choice was to go forward or not go forward, we’re much better off having gone forward,” Schumer told The Associated Press.

The legislation has been one of the party’s top priorities in Congress since Democrats gained control of both houses and the White House, bringing unified party power to Washington.

The Freedom to Vote: John R. Lewis Act is seen by party leaders and civil rights advocates as essential to protecting the right to vote as Republican-led states nationwide put in place laws that will make it more difficult for Black Americans and others to cast ballots. States are curbing early voting and mail-in ballots, both popular during the COVID-19 pandemic, and requiring various types of voter identification, among other changes.

Schumer, a Democrat from New York in his first term as majority leader, has been under enormous pressure to deliver the voting package as it languished in Congress, an uphill struggle in the evenly split Senate that by many accounts appeared doomed to fail.

He didn't have the votes to overcome a Republican filibuster , as all 50 GOP senators lined up against the package, criticizing it as federal overreach into state-run elections.

Then the bill was dealt a devastating blow when two Democratic senators, Kyrsten Sinema of Arizona and Joe Manchin of West Virginia, refused to change the party’s rules in this one case to overcome the filibuster’s 60-vote threshold and allow passage with a simple majority.

But Schumer, who has been reading a biography of former President Ulysses S. Grant, defended his decision to pursue this week’s vote, framing it as part of the long arc of the nation’s civil rights struggles that continue to this day.

“He showed me how, you know, the right to vote is essential,” Schumer said.

Schumer pointed to the late Rep. John Lewis, D-Ga., who was left beaten and bloody as a young man marching for voting rights across the Edmund Pettus Bridge in Alabama, and the persistence of Black Americans and others to keep pressing to secure equal access to the ballot.

“Look at the civil rights movement,” he said.

It took several sessions of Congress before civil rights and voting rights legislation would ultimately be signed into law by President Lyndon B. Johnson.

“I mean, you got to pursue things and you got to put people on the record,” Schumer said. “Our job is to vote.”

After the legislation collapsed late Wednesday, Biden said he was “profoundly disappointed” by the outcome.

But the president also said he was not deterred and would explore all options to protect the vote.

Not long ago, a number of Democratic senators — many still in office —- signed onto a 2017 letter opposing filibuster changes. During the Senate debate, several of them rose to explain why they were willing to change course for this bill.

In the end, all but Manchin and Sinema were ready to adjust the rules to pass the voting bill.

“We made progress,” Schumer said. “It’s amazing to me that our caucus — 48 people — said change the rules.”

EXCLUSIVE: A group of Republican senators is introducing legislation to block the Biden administration from sending personnel and funding from the Department of Veterans Affairs (VA) to alleviate the crisis at the southern border. The senators are alarmed by the Biden administration's announced termination of Title 42 on May 23,...
CONGRESS & COURTS・28 DAYS AGO
POLITICO

Garland repeatedly emphasized that the U.S. Attorney in Delaware — a Trump appointee — is fully in charge. Hunter gatherers: Attorney General Merrick Garland insisted Tuesday that there has been no improper political influence over the Justice Department's investigation into President Joe Biden’s son Hunter's business dealings.
PRESIDENTIAL ELECTION・28 DAYS AGO
Newsweek

Colorado Governor Jared Polis cited the "impacts of inflation and the cost of living" as reasons for the tax rebate program.
COLORADO STATE・29 DAYS AGO
CNN

CNN — Sarah Huckabee Sanders will win the GOP nomination for governor of Arkansas, CNN projects, putting her in strong position to win the governorship in this red state in November. The 39-year-old former Trump White House press secretary enjoyed the support of former President Donald Trump and easily...
ARKANSAS STATE・13 HOURS AGO

Harvard polled Americans under 30 who are likely to vote in the midterms and found 85% of them want some government action on student loan debt.
PRESIDENTIAL ELECTION・29 DAYS AGO
americanmilitarynews.com

Viktor Yushchenko says Putin has become a "completely isolated and brutal despot who cannot stand any opposition."
POLITICS・29 DAYS AGO
The Independent

Florida Republicans have compared a protest against a newly drawn congressional map that dilutes Black voter strength in the state to the violent attempt to overturn the results of the 2020 presidential election on 6 January, 2021.On 21 April, a small group of mostly Black Democratic legislators staged a sit-in protest in the middle of the House floor, singing and praying and briefly delaying votes during a special legislation convened by Republican Governor Ron DeSantis, whose map eliminates two of the state’s four districts represented by Black Democrats and creates four more districts that lean Republican.State Rep Randy Fine...
PROTESTS・29 DAYS AGO
Salon

Rep. Marjorie Taylor Greene (R-GA) speaks to supporters of former U.S. President Donald Trump at the Banks County Dragway on March 26, 2022 in Commerce, Georgia. This event is a part of Trump's Save America Tour around the United States. (Megan Varner/Getty Images) On Monday, CNN's Andrew Kaczynski and Em...
COMMERCE, GA・28 DAYS AGO
Newsweek

"Our nation needs to take a serious look at the state of mental health today," said Greene in a tweet following the massacre.
TEXAS STATE・9 MINUTES AGO