Thursday was another troubling day for the stock market, as it once again featured an optimistic start to the day followed by a last-minute air pocket. Until the last hour of the day, the Dow Jones Industrial Average (DJINDICES: ^DJI) , Nasdaq Composite (NASDAQINDEX: ^IXIC) , and S&P 500 (SNPINDEX: ^GSPC) were all higher, at times sharply so. Yet the swoon in the late afternoon led all three indexes to significant declines.

After the close of the regular trading session, Netflix (NASDAQ: NFLX) reported its quarterly financial results. What the video streaming service provider had to say was highly disappointing, and the result was a 19% after-hours plunge in the share price. Below, you'll learn more about Netflix's latest numbers and why the reception from the investment community was so negative. 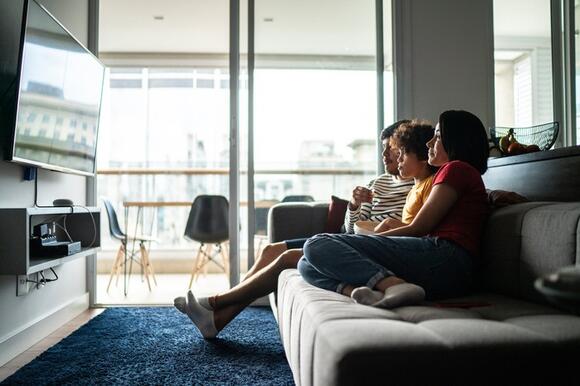 The results that Netflix announced were clearly disappointing, even though on their face, they didn't seem to be all that bad. Revenue of $7.71 billion was up 16% year over year. Net income managed to climb 12% from year-ago levels, producing earnings of $1.33 per share. Netflix added 8.28 million net subscriptions globally, climbing almost 9% year over year.

The 1.2 million paid memberships in the U.S. and Canadian region that Netflix saw come in during the fourth quarter was the strongest period since near the beginning of the COVID-19 pandemic in early 2020. Moreover, the Asia-Pacific region saw sizable growth of 2.6 million paid memberships, compared to 2 million added memberships in the year-ago quarter. Although the Europe, Middle East, and Africa segment slowed down somewhat from prior-year results, 3.5 million net additions still made it Netflix's most successful region.

However, there were some troubling signs as well. Perhaps the most important came from Netflix's own guidance for the first quarter of 2022. Projections for $7.9 billion in revenue would represent just 10% growth from the first quarter of 2021 -- even with Netflix's latest price increases starting to take effect. Net income guidance for $1.3 billion, or $2.86 per share, would be substantially lower from year-earlier levels.

Worst of all, Netflix expects to bring in just 2.5 million new subscriptions globally. The company tried to explain that much of its new content will come out toward the end of the period, which it expects will lead to delayed new signups. Nevertheless, difficult economic conditions and the lingering uncertainty of the pandemic have caused Netflix's new acquisition growth to lag behind its pre-pandemic levels, and Netflix believes that could continue.

Will the market stream lower?

Judging from the way that Netflix's peers in the streaming industry reacted to the news, it's apparent that few investors believe this is a company-specific problem. Shares of Disney (NYSE: DIS) were down 4% in after-hours trading, perhaps reflecting the comments about the difficulty in getting new subscribers in the highly saturated North American market. Roku (NASDAQ: ROKU) saw its stock drop 5% after hours, suggesting that connected TV is also at risk.

The big question is whether the rest of the market sees Netflix's slowdown as indicating a broader trend. Already, the Nasdaq has fallen more than 10% from its highs, and pessimism appears to be taking root in many different corners of the stock market.

When established growth leaders hit speed bumps, it always makes shareholders think twice about their positions. Long-term investors in Netflix and other high-growth stocks have seen this episode play out many times before, but that doesn't make it any easier to go through each time it happens.

10 stocks we like better than Netflix
When our award-winning analyst team has a stock tip, it can pay to listen. After all, the newsletter they have run for over a decade, Motley Fool Stock Advisor , has tripled the market.*

They just revealed what they believe are the ten best stocks for investors to buy right now... and Netflix wasn't one of them! That's right -- they think these 10 stocks are even better buys.

It offers the powerful combination of growth and dividends.
STOCKS・1 DAY AGO
Popculture

Netflix has canceled another one of its major shows, with this one getting the ax after only two seasons. Variety reports that hit sci-fi drama Raising Dion has been dropped by the streamer, following its recent season debut. The news seems to have been revealed by series star Sammi Haney, who shared the news with fans on Instagram. "Sad to say that Raising Dion is CANCELED [sic] Thank you for all of the amazing support we got from all of our wonderful fans!" Haney wrote, in part. "Season 2 was a success, equal to Season 1, even if just looking at how many people watched all of it and wanted a season 3!"
TV SERIES・28 DAYS AGO
TheStreet

Once again, Disney (DIS) - Get Walt Disney Company Report is finding itself embroiled in a political quagmire owing to its support of the LGBTQ community, after Florida Gov. Ron DeSantis punished Disney for denouncing his “Don’t Say Gay Bill,” by seeking to revoke Disney World’s designation as a special tax district (which as we pointed out, is ultimately a meaningless gesture).
FLORIDA STATE・28 DAYS AGO
inputmag.com

And why this could be a buying opportunity for long-term investors.
STOCKS・23 HOURS AGO
Entrepreneur

Collecting items like Beanie Babies can be a fun hobby that allows you to create special memories. What you might not realize is some collections also grow to be worth a fortune. In some cases, items...
SHOPPING・14 MINUTES AGO
The Motley Fool

Is Snap Stock a Buy After Its Spectacular Fall From Grace?

A dire warning about the state of the economy sent the social media company plummeting.
STOCKS・18 HOURS AGO
The Motley Fool