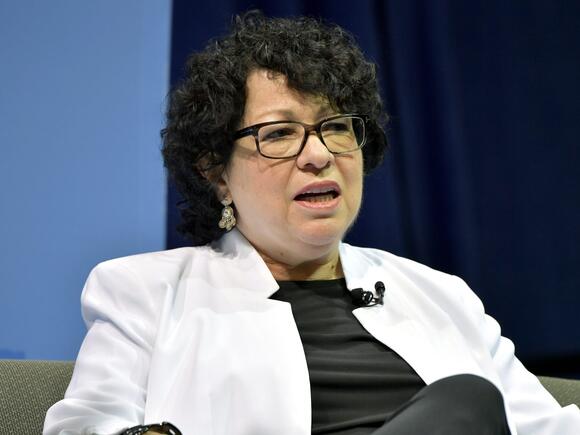 Associate Justice Sonia Sotomayor on Thursday wrote a fiery dissent to the Supreme Court's decision to reject another request from Texas abortion providers seeking to block the state's six-week ban on abortions.

"Today, for the fourth time, this Court declines to protect pregnant Texans from egregious violations of their constitutional rights," Sotomayor, who's served on the bench since 2009, wrote in a dissenting opinion joined by fellow liberal Justices Stephen Breyer and Elena Kagan.

Texas abortion providers had asked the Supreme Court to intervene in their legal challenge against the six-week law by sending the case back to a federal district court, which previously declared the law as unconstitutional. But the Supreme Court's conservative majority, without providing any reasoning, denied their request.

The decision represents a setback to Texas abortion providers that have been trying to block the law for months.

"This case is a disaster for the rule of law and a grave disservice to women in Texas, who have a right to control their own bodies. I will not stand by silently as a State continues to nullify this constitutional guarantee," Sotomayor wrote.

The Supreme Court has largely sidestepped the case as litigation continues in the lower courts. In a ruling last month, the nation's highest court allowed Texas abortion providers to proceed with a federal lawsuit against some state officials, but let the law stand in the meantime, dealing a blow to abortion-rights supporters.

The legal challenge returned to the 5th US Circuit Court of Appeals, one of the most conservative federal appeals courts in the country, which on Monday sent the case to the Texas Supreme Court. The move is widely expected to delay the case, which in turn would keep the law in place for longer.

The Texas law in question, known as SB 8, is the most restrictive abortion statute in the nation and bans the procedure after six weeks of pregnancy, a time when many women do not yet know they are pregnant.

The Supreme Court has also not directly considered the constitutionality of the law, which abortion-rights supporters say is in direct conflict with Roe v. Wade, the 1973 landmark ruling that legalized abortion nationwide and guaranteed the right to the procedure up until around 24 weeks of pregnancy.

A slew of Republican-led states over the years have unsuccesfully tried to enact abortion restrictions. But since the Texas law took effect on September 1, it has managed to survive legal challenges because of its unique design, which calls on private citizens, rather than state officials, to enforce the ban. That means any individual can sue an abortion provider or anyone who they believe "aids and abets" someone getting an abortion beyond the six-week mark, leaving state officials out of the equation. Successful plaintiffs will be rewarded at least $10,000, in addition to legal fees.

In her dissent, Sotomayor wrote that the Supreme Court "allows the State yet again to extend the deprivation of the federal constitutional rights of its citizens through procedural manipulation."

"The Court may look the other way, but I cannot," she added.

Has Sotomayor made a public statement correcting her false statement about the number of children hospitalized with Covid? Imagine a Supreme Court judge casting a vote based on false information.

she is supposed to be a judge on our Supreme Court. However is and was an activist when chosen. She is a disservice to the American people.

She needs removed from the bench. How can a Supreme Court justice rant and rave about it being a woman’s constitutional right to have an abortion because it’s her body her choice yet just the other day back and support having mandates for vaccines. If abortion is legal constitutionally then so is refusing to take a vaccine. In addition I always love the argument that I am not a woman so it’s not something I should have an opinion about. Well last time I checked the woman is a vessel that is holding secretions from my body so the choice should not only be hers. If it is solely her body her choice then child support laws need changed.

The court is expected to hand down a ruling on the most significant gun-rights case in over a decade in late June or early July.
CONGRESS & COURTS・3 HOURS AGO
POLITICO

Garland repeatedly emphasized that the U.S. Attorney in Delaware — a Trump appointee — is fully in charge. Hunter gatherers: Attorney General Merrick Garland insisted Tuesday that there has been no improper political influence over the Justice Department's investigation into President Joe Biden’s son Hunter's business dealings.
PRESIDENTIAL ELECTION・29 DAYS AGO
Salon

Fox News host Lisa Kennedy said on Monday that U.S. lawmakers "should not have the government involved in education at all," suggesting that America should rid itself of the public school system entirely. Kennedy's remarks came during Monday's segment of "Outnumbered" in which Kennedy was facilitating a discussion around the...
CONGRESS & COURTS・29 DAYS AGO
Business Insider

The poll also found that 44% of Republic voters want congressional candidates to focus on the 2020 presidential election.
PRESIDENTIAL ELECTION・1 DAY AGO

EXCLUSIVE — Archbishop Wilton Gregory of the Archdiocese of Washington, D.C., has refused to comment publicly on whether he supports the barring of House Speaker Nancy Pelosi (D-CA) from receiving Holy Communion in light of her stance on abortion, with his office saying in a blunt and mistakenly sent email to the Washington Examiner that requests “will be ignored.”
WASHINGTON, DC・2 DAYS AGO
Business Insider

One place you won't find guns in the wake of the Texas school massacre? The NRA's upcoming leadership conference in Houston this week.

An NRA memo said the restrictions were due to US Secret Service firearm guidelines as former President Donald Trump is slated to speak at the forum.
HOUSTON, TX・20 HOURS AGO
Business Insider

Federal prosecutors have alleged that Owens and his son, Grady, assaulted officers during the January 6, 2021 insurrection.
WASHINGTON, DC・2 DAYS AGO
The Guardian

Texas governor Greg Abbott shares more details about the shooting, including that the shooter posted three times before the attack – follow the latest news
TEXAS STATE・28 MINUTES AGO

Live election updates: Democratic runoff goes down to the wire in Texas while Trump-backed candidates have a bad night in Georgia

At a campaign event, former schoolteacher Kandiss Taylor delivered an anti-abortion speech that criticized the separation of church and state.
GEORGIA STATE・2 DAYS AGO

Brooks, a congressman who Trump endorsed and later un-endorsed over the 2020 election, will face Britt in a June runoff.
ALABAMA STATE・20 HOURS AGO
Business Insider

Trump doubles down on his 'longtime commitment' to speak at an NRA convention after deadly Texas school shooting: 'America needs real solutions and real leadership in this moment'

Ted Cruz is also scheduled to speak at the event, which will be held in Houston, just a few hours' drive from the mass shooting in Uvalde.
TEXAS STATE・6 HOURS AGO
Business Insider

Cost of Inequity returns with this special edition that examines historical events and systemic flaws in the student loan industry that have left marginalized and disenfranchised groups feeling cheated out of the American Dream.
CREDITS & LOANS・9 HOURS AGO
Business Insider

The Department of Justice is investigating an effort by Trump's allies to overturn the 2020 election with the help of alternate elector slates.
U.S. POLITICS・2 HOURS AGO

PROVIDENCE, R.I. (AP) — By now it’s as predictable as the calls for thoughts and prayers: A mass shooting leaves many dead, and wild conspiracy theories and misinformation about the carnage soon follow. It happened after Sandy Hook, after Parkland, after the Orlando nightclub shooting and after the...
TEXAS STATE・1 HOUR AGO
Business Insider