As details of DWI crash emerge, Walz and Flanagan call on Hennepin sheriff to resign

"It's not our role to hire or fire the sheriff of Hennepin County," said the St. Louis Park resident Flanagan Thursday afternoon, while flanked by the governor. "But as a constituent, I would say that it is time for him to resign."

The Minnesota Department of Public Safety released hundreds of files from the investigation earlier that morning, including documents, images, video and audio. They show Hutchinson, who pleaded guilty to misdemeanor DWI, was going 125 mph just before he crashed the county-owned vehicle on I-94 in Alexandria around 2:30 a.m. last month.

Records also indicate he insisted to law enforcement on the scene that he wasn't driving, trying to blame the wreck on a cab driver he claimed had been behind the wheel. Investigators found three guns at the scene and open containers of alcohol in the SUV. Witnesses said they saw him crawling away from the crashed vehicle.

Walz cited the "position of responsibility" Hutchinson, as the top law enforcement officer of the state's largest county, is in, and described the incident as a "breach of trust."

Walz and Flanagan both expressed relief nobody else was hurt in the single-vehicle rollover, and said they hope Hutchinson gets whatever help he needs going forward.

Flanagan also reiterated her stance, saying it "is time for him to step down." 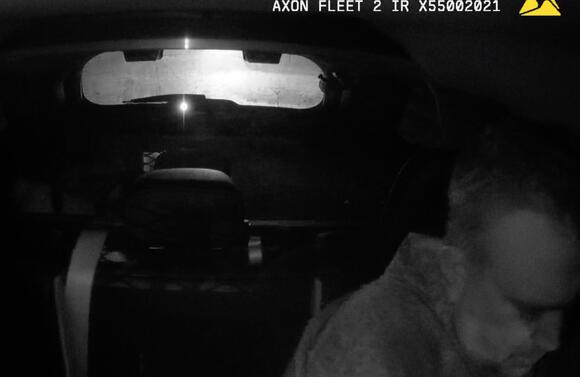 Hutchinson already faced growing calls to resign from a number of local officials, including a majority of the seven Hennepin County commissioners, with many citing his lies to first responders in the immediate aftermath of the wreck.

The sheriff, to this point, has resisted such a move. After news of the crash came out, Hutchinson put out a media release saying he takes full responsibility for his actions, adding he enrolled in an outpatient treatment program to address his issues with alcohol and his overall health.

"This is the first step in the road toward recovery and regaining the trust of the people I work with and the residents of Hennepin County whom I serve," the statement continued. "I have returned to work and will focus on my duties as sheriff."

Hutchinson was sentenced to two years of probation. A 90-day jail sentence will be stayed if he follows the terms of his probation, which include a chemical assessment. He also had to pay $610 in fines.

The 2-year-old boy who died in Minneapolis, with his mother now under investigation, has been officially identified. Ona'Je Prince Sincere Jackson died at Hennepin Healthcare on May 4. The boy's cause of death has not yet been given, as the investigation is ongoing. He was taken to the hospital that...
MINNEAPOLIS, MN・19 HOURS AGO
Bring Me The News

Arianna M. Vos has been identified as the victim killed in a crash caused by a wrong-way driver southwest of the Twin Cities last weekend. The 19-year-old from Hutchinson was a passenger in a Nissan Rogue that was struck head-on by a 34-year-old man who was going the wrong way on Highway 169.
HUTCHINSON, MN・20 HOURS AGO
Bring Me The News

The death of a man who was found inside an apartment in Minneapolis on Sunday has been ruled a homicide by the Hennepin County Medical Examiner. Eric Andre Lamont David, 52, was found dead at 504 Ridgewood Avenue at about 4:40 p.m. Sunday, May 22. He died of "multiple sharp force injuries," the medical examiner announced.
MINNEAPOLIS, MN・1 DAY AGO

Police have confirmed there are multiple crime scenes being investigated after 28-year-old Julissa Thaler allegedly killed her 6-year-old son, Eli Hart. "Information discovered during the investigation has led to addresses in the city of Mound and Minnetrista, where officers have found evidence implicating those locations as potential scenes," Orono Police Department announced Tuesday.
MOUND, MN・21 HOURS AGO
Bring Me The News

A former South St. Paul boys basketball coach died by suicide Monday, two days before he was set to be sentenced for pleading guilty to federal fraud charges. The Mendota Heights Police Department said officers were called around 3 p.m. Monday for a possible suicide in the 600 block of Wesley Court, where they found McCollister dead inside his home.
MENDOTA HEIGHTS, MN・17 HOURS AGO
Bring Me The News

Charges: 6-year-old Eli Hart shot up to 9 times by his mother

The mother of 6-year-old Eli Hart has been charged with his murder, with a criminal complaint stating she shot him potentially up to nine times with a shotgun. Julissa Thaler, 28, of Spring Park, has been charged with 2nd-degree murder with intent after her son's body was found in the trunk of the vehicle she was driving during a police traffic stop on Thursday.
SPRING PARK, MN・1 DAY AGO
Bring Me The News

Dave Hutchinson, the Hennepin County sheriff set to step down this year in the wake of a high-speed DWI crash, is taking a leave of absence for "health-related reasons." The sheriff's absence was confirmed by Hennepin County on Thursday, saying his absence will be for the "indefinite future," with Chief Deputy Tracey Martin taking over his role on an interim basis.
HENNEPIN COUNTY, MN・5 DAYS AGO

Albert Lea shooting suspect arrested after 3 weeks on the run

A 19-year-old shooting suspect from Albert Lea was arrested Sunday after three weeks on the run from police. Javen Juan Moreno was wanted in connection to a May 1 shooting that left a 34-year-old man with a gunshot wound to his upper thigh. He was arrested May 22 and booked into the Freeborn County Jail, where he is being held on $200,000 bond after being charged with second-degree assault with a dangerous weapon.
ALBERT LEA, MN・1 DAY AGO
Bring Me The News

Two men have been charged with carrying out an armed robbery at a Newport apartment in which they allegedly shot a woman in the abdomen and put a gun to the head of a male resident. The incident was reported around 7 a.m. on May 14, with police called to...
NEWPORT, MN・18 HOURS AGO
Bring Me The News

A hotel in Bloomington was evacuated Tuesday after a chemical spill in the pool area, according to fire officials. The incident happened at the Staybridge Suites Hotel in the 500 block of American Boulevard West. Shortly before noon, the Bloomington Fire Department said the spill had been contained and two...
BLOOMINGTON, MN・22 HOURS AGO

#Dwi#Guns#Records#Minnesotans
Bring Me The News

A motorcyclist from Eden Valley was killed in a crash in central Minnesota Friday. The Stearns County Sheriff's Office says it received a report of a motorcycle crash on County Road 162, west of Eden Lake Township. The 911 caller said they believed the driver of the motorcycle was dead,...
STEARNS COUNTY, MN・1 DAY AGO
Bring Me The News

Authorities have identified the man and woman who died after a volley of bullets was fired at a vehicle in Robbinsdale on Thursday. The Hennepin County Medical Examiner confirmed that Damone Rhodes, 28, and Aaronesia Clark, 24, both died from multiple gunshot wounds. They were both found inside a vehicle...
ROBBINSDALE, MN・3 DAYS AGO
Bring Me The News

A water main rupture in St. Louis Park led to flooding in dozens of homes at the weekend. The main break was reported around 7 a.m. Saturday on Minnetonka Boulevard, between Texas and Sumter Avenues. "A 12-inch water main ruptured and flowed underground through the sanitary sewer, emerging in the...
SAINT LOUIS PARK, MN・1 DAY AGO
Bring Me The News

Over 400 mental health workers are gathering for a one-day strike on Tuesday in the Twin Cities. The M Health Fairview and Allina Health workers walked out at 6 a.m., according to a post on Facebook. A "Solidarity Rally at Riverside Hospital" started at noon, located at 25th Avenue South and Riverside Avenue in Minneapolis.
MINNEAPOLIS, MN・22 HOURS AGO

Carjacking outside ice arena in Golden Valley under investigation

Authorities are investigating an apparent "isolated and random" armed carjacking that occurred late Monday evening outside the Breck Ice Arena in Golden Valley. Officers responded to the arena off Olson Memorial Highway around 11:15 p.m. on May 16 after a 911 caller said he'd been chased down by a carjacker and held-up at gunpoint, according to Golden Valley Police.
GOLDEN VALLEY, MN・4 DAYS AGO
Bring Me The News

A Minnesota State Patrol helicopter pilot is recovering from a head injury after a duck flew through the windshield, shattering it. The incident happened Wednesday at about 10:15 p.m. The State Patrol said the flight initially was requested to help assist law enforcement in Wabasha County. While the pilots were on their way back, a duck flew through the windshield.
WABASHA COUNTY, MN・5 DAYS AGO
Bring Me The News

Source of 'loud explosion' in Brooklyn Park a mystery

The source of a "loud explosion" heard in Brooklyn Park in the early hours of Saturday morning remains a mystery for now. Brooklyn Park Police Department says officers were sent "to the general area" of the 6900 block of Target Parkway North – closed to Target's North Campus offices – at around 12:15 a.m. "for a report of a loud explosion heard."
BROOKLYN PARK, MN・3 DAYS AGO