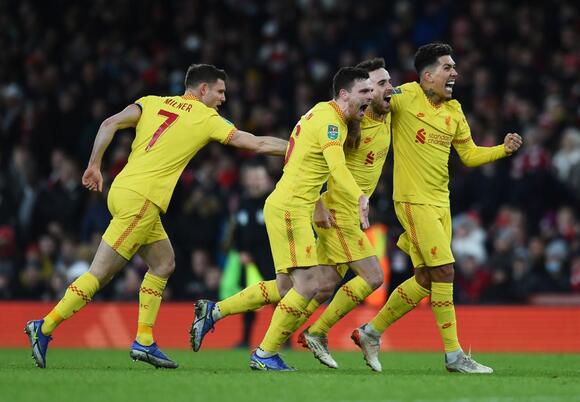 Liverpool are through to the Carabao Cup final after beating Arsenal 2-0 on the night and on aggregate.

They will face Chelsea at Wembley, after a dominant showing in the semi-final second leg which saw the Gunners end with 10 men after a late Thomas Partey red card.

Diogo Jota raced infield to strike home the game’s first goal from the edge of the box midway through the first half, and the Portuguese forward was the star of the show, lobbing in a second to send the Reds clear.

Partey had been on the pitch fewer than 20 minutes when he picked up two yellows and a subsequent red and the visitors were deserved victors on the night.

Here are the player ratings from the semi-final second leg.

Aaron Ramsdale, 4. Wrong-footed and couldn’t adjust for the opening goal. Saved by his post off a set-piece too and then beaten once more for Jota’s second - two goals from two shots on target against him.

Takehiro Tomiyasu, 5. Beaten easily for the opener, ending on the ground. Looked short of sharpness after a recent absence.

Ben White, 5. A few very agricultural clearances. Should have done better for Jota’s goal and was left for dead by the same player down the wing for another big chance.

Gabriel Magalhaes, 6. Wayward with a few too many passes out from the back but had a tough night trying to keep an under-pressure defence afloat at times.

Kieran Tierney, 6. Defensively sound but not too many chances to break forward. Got clattered by his own goalkeeper, too.

Martin Odegaard, 7. A deeper role than usual but did very well, dominant in the early stages. Good on the ball but less able to keep pace with the Reds’ constant switches of possession.

Albert Sambi Lokonga, 7. Some good ball-winning and a few bursts past opponents, but also loose in possession at times.

Bukayo Saka, 6. A few moments of danger but marginalised by the visitors’ dominance in midfield. Looked frustrated in the second half when he lost possession several times.

Emile Smith Rowe, 4. Very quiet throughout and played a really poor pass when a through-ball would have set a big two-on-one chance up. Clearly not fit.

Alexandre Lacazette, 5. Hit the bar from an early free-kick but not involved much in the rest of the first half. Smashed over soon after the break. 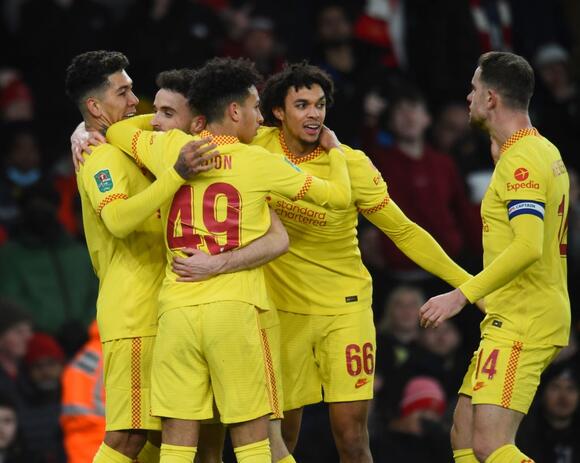 Caoimhin Kelleher, 8. A surprise starter, but the Reds’ cup keeper after all. Great tip onto the crossbar early on and did well on set-piece aerials too.

Trent Alexander-Arnold, 8. Another game, another assist or two. Fired a few more beautiful balls into the Arsenal area which were begging to be finished off by team-mates.

Joel Matip, 5. Very sloppy on the ball in the first half, particularly outside his own box. Subbed at the break.

Fabinho, 8. Fantastic last-ditch tackle to deny Martinelli. Actually missed one or two tackles in midfield but more than made up for those with his usual ability to regularly break up play and shift possession upfield.

Jordan Henderson, 5. Not the captain’s finest night as he struggled to keep pace with Arsenal’s counters down their left. Got into a few good positions early on but the final pass was lacking.

Curtis Jones, 7. Carried the ball superbly from deep, turning away from danger and helping the Reds move upfield.

Kaide Gordon, 6. Shown a real vote of confidence by Jurgen Klopp in starting right wing, but not much went his way until a shot soon after the break - which he skied.

Roberto Firmino, 7. Dropped deep to good effect but no real goalmouth involvement in the first half. Was involved in the Jota goal, with a neat flick on the halfway line.

Diogo Jota, 9. Raced infield to roll home the opening goal, then skinned White to tee up a great chance for Gordon. Showed fantastic pace and movement again to burst in bury a lovely lobbed second.

What next for Man City after winning fourth Premier League title in five years?

Manchester City are celebrating their fourth Premier League title in five seasons.Here, the PA news agency looks at how the club will hope to stay ahead of the pack.Will City start next season as favourites?Undoubtedly so. City may have been taken to the wire this season by Liverpool but, while the Merseysiders will hope to regroup and challenge again, they already seem well ahead of the rest of the competition. City failed to land their top transfer target in Harry Kane last summer but still went on to clock up 93 points and score 99 goals. Having already announced the...
PREMIER LEAGUE・1 HOUR AGO
The US Sun

FULHAM have confirmed the exit of 14 players including TWO of their biggest transfers ever who cost the club a combined £50million. Jean Michaël Seri and Alfie Mawson will depart the club this summer alongside 12 others players. Seri joined the club for a near £30m in the...
PREMIER LEAGUE・17 MINUTES AGO
The Independent

Erik Ten Hag has spoken of his excitement after taking charge at Manchester United, who he sees as having “huge potential”.The Dutchman on Monday conducted his first press conference since being named as Ole Gunnar Solskjaer’s permanent successor last month.The former Ajax boss comes in after United, with Ralf Rangnick in interim charge, finished sixth in the Premier League table.Ten Hag opened the press conference at Old Trafford by saying he was “really excited to be here” and stressing “I want to achieve success”.He added: “The confidence is that I have a good feeling with the people around, I have...
PREMIER LEAGUE・2 HOURS AGO
The Independent

Erik ten Hag hailed Harry Maguire as a "great player" but stopped short of giving guarantees that he will remain as Manchester United captain next season.Maguire's position as captain has come under scrutiny during United's worst-ever Premier League season, with the centre-back struggling for form.The 29-year-old was handed the captain's armband by former manager Ole Gunnar Solskjaer in January 2020, five months after signing in an £80m deal from Leicester City.The United dressing room has since seen the arrival of influential figures like Bruno Fernandes and Cristiano Ronaldo.Ten Hag was asked whether he intends to retain Maguire as captain...
PREMIER LEAGUE・3 HOURS AGO

Noel Gallagher has revealed that he required stitches after an inadvertent clash of heads with Ruben Dias’ father while celebrating Manchester City’s Premier League title.The Oasis songwriter is a lifelong fan of the club, and was at the Etihad Stadium as Pep Guardiola’s side sealed the title with a 3-2 comeback victory against Aston Villa.Gallagher, however, was unable to watch the final moments of the game after being forced to seek medical attention after Ilkay Gundogan’s winner.The guitarist explained to talkSPORT: “As the third goal goes in, there is absolute bedlam in the stadium.“Where we sit, Ruben Dias’ family are...
PREMIER LEAGUE・2 HOURS AGO
The Independent

Erik ten Hag has confirmed Cristiano Ronaldo is in his plans next season as the Dutchman was unveiled as Manchester United’s new manager.Ten Hag was speaking at Old Trafford in his first press conference as new head coach, where he set out his hopes to take the club forwards after a disppointing season ended in a 1-0 defeat at Crystal Palace on Sunday, which Ten Hag watched from the stands. One of the few bright spots in a poor season was the performance of Cristiano Ronaldo, who scored 18 league goals and 24 in total. Asked whether the 37-year-old Ronaldo...
PREMIER LEAGUE・3 HOURS AGO
The US Sun

MANCHESTER UNITED owner Avram Glazer has hinted that the club could splash the cash in the upcoming transfer window. The Red Devils are expected to dip into the market under Erik Ten Hag having posted their lowest ever Premier League points tally. Two central midfielders, plus a striker and a...
PREMIER LEAGUE・25 MINUTES AGO