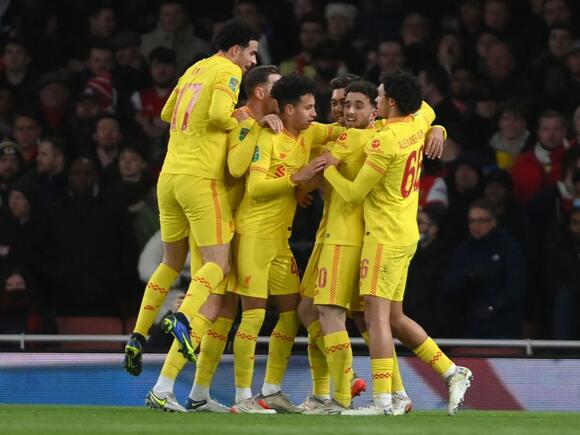 Liverpool booked their place in the Carabao Cup final as a Diogo Jota doubled handed them a 2-0 win at the Emirates.

Mikel Arteta ’s side held Jurgen Klopp ’s men to a goalless draw at Anfield but were undone in front of their home fans by two strikes from the Portuguese forward.

The hosts went closest early on when Alexandre Lacazette’s free-kick was tipped onto the bar by Liverpool keeper Caoimhin Kelleher.

Jota then gave Liverpool the lead shortly before the 20-minute mark when he darted sharply inside Takehiro Tomiyasu before rolling a low shot into the bottom corner from the edge of the area. And Liverpool’s place at Wembley was assured late on when Jota dinked the ball cooly over Aaron Ramsdale.

Here are five things we learned from the game.

Arsenal dominated the first 18 minutes of the game. But - in the absence of Mohamed Salah and Sadio Mane - Jota stepped up as Liverpool’s expert marksman. And he did not disappoint, wriggling his way through Arteta’s defensive line before finding the corner with a confusingly precise finish. Then in the second half he doubled his tally for the evening with a superb run and finish - a truly elite piece of forward play.

Those goals take him to 14 in 27 appearances so far this season - only Salah has scored more goals for Klopp’s men. And his second one in particular was the kind of goal we have come to expect from Salah and Mane in recent years - just ruthlessly clinical.

Jota is establishing himself as an elite level goalscorer at a time of the season when Liverpool are going to need one if they are to pick up some silverware this season.

In the five years before Arteta arrived at the Emirates, Arsenal failed to win any of their 10 meetings against Liverpool. Seven months after his arrival, they beat them 2-1 in the Premier League at a time when Klopp’s side had already been crowned Premier League champions. Since then, two more victories over Liverpool have come in the Community Shield and Carabao Cup.

The result of those performances? The climate of fear Liverpool once held over Arsenal has clearly disappeared. Irrespective of their league positions, the home side took the game by the scruff of the neck from the first minute. They went toe-to-toe with the gegenpressing goliaths.

It might not have been the result the Arsenal fans were hoping for, but their team showed they are now confident enough to slug it out with England’s finest.

They are still lacking a little nous, a little experience. But the mentality is there. That’s not something you could have said about many Arsenal sides over the last decade.

With Alisson fit and available, it was something of a surprise that Kelleher was selected ahead of the Brazilian for this one - particularly given the Liverpool number one played the first leg. But, with starts against Chelsea and Shrewsbury already under his belt, the Irish keeper enjoyed a fine evening between the sticks.

He made a fine save to tip Lacazette’s free-kick onto the bar early on, showing nice footwork and reflexes to get across his goal and provide the all important touch. And then he stayed alert to Gabriel Martinelli’s near post attempt inside the final 20 minutes, palming that one over the top.

But it was his sweeper keeper mentality that was the most impressive part of his display. Any dangerous pass in behind the Liverpool back line was swept up by Kelleher.

Unlike Simon Mignolet, Adrian and Loris Karius who came before him, Kelleher is making himself known as a reliable understudy to Alisson, rather than a calamitous concern.

No time for a Partey

It has been a week to forget for Thomas Partey.

He was a part of the Ghana team that were dumped out of the Africa Cup of Nations with just one point and a demoralising defeat to Comoros.

Then he returned to England at midday on Thursday and was immediately included on the bench for Arsenal in their clash against Liverpool. He replaced Emile Smith Rowe in the 74th minute but would not see the final whistle.

Chelsea and Liverpool have provided two brilliant Premier League clashes so far this season in their 1-1 and 2-2 draws. Now we are going to be treated to a third clash between the sides. At Wembley. For a trophy.

Thomas Tuchel has faced Klopp more than any other manager in his career. But he has only gotten the better of his fellow countryman in three of their 17 meetings.

Meanwhile, Klopp has not yet won a domestic cup in England. He has failed to reach the final of the FA Cup, while his only League Cup final was six years ago when Liverpool lost on penalties to Manchester City at the start of Pep Guardiola’s stranglehold on the competition.

It is all to play for in a huge Carabao Cup final showdown on Sunday 27 February.

Newcastle vs Arsenal prediction: How will Premier League fixture play out tonight?

Arsenal head to Newcastle United knowing victory will put them on the brink of securing fourth. The Gunners endured a crushing 3-0 defeat against Tottenham last Thursday but their bid for a Champions League return remains in their own hands. Mikel Arteta will need to make do without a number of key players, though, while Newcastle will be aiming to put on a show in their final home game of the season. The Magpies are coming off back-to-back defeats against Liverpool and Manchester City but had long assured their safety after an impressive resurgence under Eddie Howe. Here is everything...
PREMIER LEAGUE・1 HOUR AGO
The Independent

Jurgen Klopp claimed Liverpool fans would not have booed the national anthem or the Duke of Cambridge at the FA Cup final “if there was not a reason”.Some Reds supporters controversially jeered as ‘God Save The Queen’ was sung and as William, the president of the Football Association, was presented to players prior to Saturday’s showpiece against Chelsea at Wembley.There was also booing from Liverpool fans as ‘Abide With Me’, the cup final’s traditional hymn, was sung.Liverpool manager Klopp admitted he did not enjoy the booing but did not condemn it when asked for his thoughts at a press conference...
PREMIER LEAGUE・2 HOURS AGO
The Independent

Coleen Rooney said that messages about her sent between Rebekah Vardy and her agent were “just evil” and “uncalled for”, during day five of Ms Vardy’s libel trial at the High Court. Finishing her cross-examination on Monday morning, Ms Rooney said that she has “hated every minute” of the legal proceedings. She branded her “Wagatha Christie” moniker “ridiculous” and said she didn’t tell anyone about her sting operation because she is used to dealing “with things in silence”. The two footballers’ wives are battling one another in court over a widely circulated social media post in which Ms Rooney accused...
SPORTS・1 HOUR AGO
The Independent

British govt yet to OK Chelsea sale by sanctioned Abramovich

The British government has yet to approve the sale of Premier League club Chelsea to a consortium fronted by Los Angeles Dodgers part-owner Todd Boehly. Outgoing Russian owner Roman Abramovich is not allowed to profit from the proceeds of the sale since he was sanctioned and his assets were frozen for his links to President Vladimir Putin after the invasion of Ukraine.An update to the license allowing Chelsea to continue operating as a business is required from the government to approve the buyout. The club was put up for sale in March and a rapid process ended with Boehly's group...
PREMIER LEAGUE・2 HOURS AGO

Minute-by-minute updates: A place at Wembley is on the line tonight after the first leg ended 1-1. Get the latest from John Brewin
SOCCER・23 MINUTES AGO
The Independent

Blackpool forward Jake Daniels has become the first male professional footballer in the UK to come out as gay for 30 years.Daniels, who recently broke into Blackpool’s first team and signed his first professional contract after a stellar season of goalscoring for the youth team, said in a statement: “I’ve known my whole life that I’m gay, and I now feel that I’m ready to come out and be myself.”The 17-year-old is the first male professional player to come out since Justin Fashanu did so in 1990. Fashanu, who took his own life in 1998, faced a fierce backlash from...
SOCIETY・2 HOURS AGO