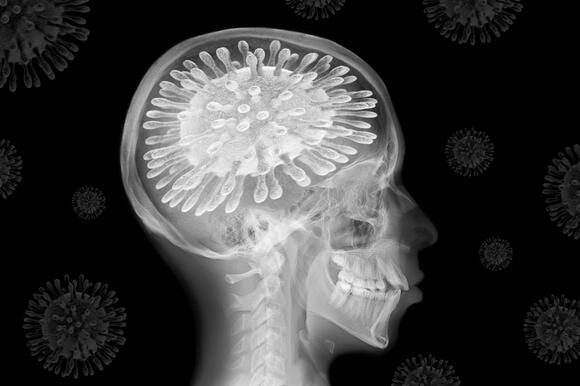 SAN FRANCISCO, Calif. ( StudyFinds.org ) – Cases of “brain fog” among COVID patients are becoming more and more common, even among people recovering from mild infections. Now, new research is finally providing some potential answers to why people have difficulty concentrating, thinking clearly, and completing easy daily tasks after battling COVID. A team from the University of California-San Francisco say brain fog may result from how the virus alters a person’s spinal fluid — just like other diseases which attack the brain.

Their study finds certain patients who develop cognitive symptoms following a mild case of COVID-19 display abnormalities in their cerebrospinal fluid, similar to the kinds which appear in patients with diseases like Alzheimer’s . While this is only a start, study authors are optimistic this work is an important first step toward understanding what exactly SARS-CoV-2 can do to the human brain.

“They manifest as problems remembering recent events, coming up with names or words, staying focused, and issues with holding onto and manipulating information, as well as slowed processing speed,” explains senior study author Joanna Hellmuth, MD, MHS, of the UCSF Memory and Aging Center, in a university release .

Post-COVID brain fog is likely much more common than most people realize. One recently released study focusing on a post-COVID clinic in New York found that a staggering 67 percent of 156 recovered COVID-19 patients experienced some form of brain fog.

This latest research featured 32 adults. All participants had recovered from a COVID-19 infection but did not require hospitalization. Twenty-two exhibited genuine cognitive symptoms, while the rest served as a healthy control group.

Among the entire group, 17 (including 13 with brain fog symptoms) agreed to have their cerebrospinal fluid analyzed. Scientists extracted the fluids from the lower back, on average, about 10 months after each patient’s first COVID symptoms.

Those tests showed 10 of the 13 participants with cognitive symptoms had anomalies within their cerebrospinal fluid. Importantly, the other four cerebrospinal fluid samples collected from people without brain fog showed no anomalies whatsoever. Participants experiencing cognitive issues tended to be older, with an average age of 48, while the control group’s average age was younger: 39 years-old.

All of the patients come from the Long-term Impact of Infection with Novel Coronavirus (LIINC) study, which tracks and assesses adults recovering from SARS-CoV-2.

COVID-19 emergency could end this year, WHO says

Study authors don’t know the intended target of these antibodies yet, but theorize they may attack the body itself, like an autoimmune disease.

“It’s possible that the immune system, stimulated by the virus, may be functioning in an unintended pathological way,” explains Dr. Hellmuth, who is the principal investigator of the UCSF Coronavirus Neurocognitive Study. “This would be the case even though the individuals did not have the virus in their bodies.”

Additionally, all participants underwent a series of cognitive tests with a neuropsychologist modeled after the criteria used for HIV-associated neurocognitive disorder (HAND). To the research team’s surprise, 59 percent of patients dealing with brain fog met HAND criteria, while 70 percent of the control subjects did the same.

“Comparing cognitive performance to normative references may not identify true changes, particularly in those with a high pre-COVID baseline, who may have experienced a notable drop but still fall within normal limits,” Dr. Hellmuth concludes. “If people tell us they have new thinking and memory issues , I think we should believe them rather than require that they meet certain severity criteria.”

The study is published in the journal Annals of Clinical and Translational Neurology .

A California lawmaker wants to decriminalize jaywalking, making crossing the street outside an intersection legal "when safe to do so."
CALIFORNIA STATE・17 HOURS AGO
FOX 5 San Diego

Giants’ Kapler won’t take field for national anthem: ‘I am not okay with the state of this country’

San Francisco Giants Manager Gabe Kapler told reporters before the Giants' Friday game in Cincinnati that he would not come out on the field for the national anthem until he feels "better about the direction of this country."
SAN FRANCISCO, CA・15 HOURS AGO