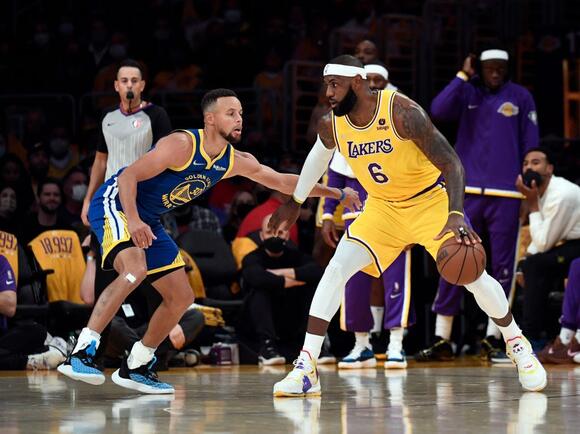 Steph Curry is no longer the leading fan vote-getter for the upcoming NBA All-Star Game in Cleveland. In the latest round of returns, shared by the league Thursday, Los Angeles Lakers superstar LeBron James (6,827,449 votes) has passed Curry (6,019,418). But the two longtime rivals are the only players in the six-million vote club.

The Athletic’s Shams Charania shared the latest results via Twitter:

Perhaps Curry has been hindered by his recent slump over the past month, as he’s posting the lowest field goal percentage (.422) and 3-point shooting percentage (38.6) of his career for a season when he’s played more than five games.

It’s worth noting that Warriors wing Andrew Wiggins (2,644,571) has maintained his third-place standing among Western Conference forwards. He has actually created some distance between himself and fourth-place West forward Paul George (2,312,248) from the last set of voting returns . Wiggins is averaging 18.5 points, 4.2 rebounds and 2.5 3-pointers made per game while shooting a career-best 49.1 percent from the field and 42.3 percent from beyond the arc.

For each conference, the fan vote accounts for 50 percent of the input for starters. The remaining 50 percent of the vote will be decided by players (25 percent) and media (25 percent), as two guards and three forwards will start in the midseason showcase. From there, the remaining seven reserves will be determined by a vote of the league’s 30 coaches. The game will be played on Feb. 20.

WATCH: Steph Curry gets tripped up by courtside waiter in Dallas

Warriors superstar Steph Curry was tripped up by a courtside beer vendor in Dallas right before halftime during Game 3 of the Western Conference Finals.
SAN FRANCISCO, CA・1 DAY AGO
95.7 The Game

TNT play-by-play man Kevin Harlan said he is “absolutely on board” with the idea that Steph Curry is a Top 10 NBA player of all-time as he appears headed to his sixth career Finals.
SAN FRANCISCO, CA・1 DAY AGO
95.7 The Game

Former Warriors guard Baron Davis – who threw down the most memorable dunk in franchise history – showed love to Andrew Wiggins via Twitter after his huge slam on Luka Doncic.
SAN FRANCISCO, CA・1 DAY AGO

Deebo gets Draymond's jersey, meets Steph after Game 3 in Dallas

Warriors forward Draymond Green gave his jersey to 49ers wide receiver Deebo Samuel in the crowd in Dallas after Golden State’s 109-100 win in Game 3 of the Western Conference Finals.
SAN FRANCISCO, CA・1 DAY AGO
95.7 The Game

Warriors president/GM Bob Myers joined 95.7 The Game’s “The Morning Roast” to share how Patrick Mahomes reacted to Andrew Wiggins epic dunk in Game 3 of the WCF, as the Chiefs QB was sitting nearby.
SAN FRANCISCO, CA・3 HOURS AGO
95.7 The Game