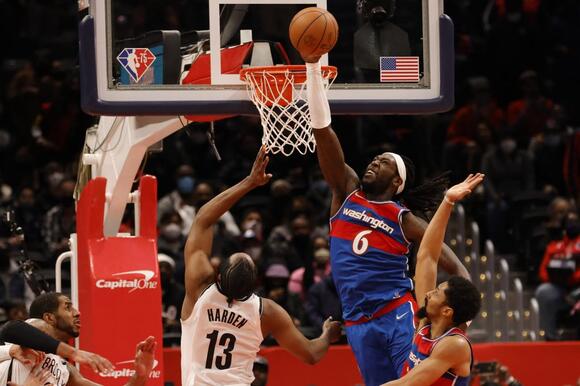 The Washington Wizards have one of the more unique rosters in the NBA. That’s a result of them having a star, plenty of proven players and youngsters who are trying to right their careers. This team is 10-plus deep in capable scorers. Of course, that depth combined with .500 play opens the door for trades. Big man Montrezl Harrell, who’s on an expiring contract, is someone who could be moved for reasonable value before the NBA trade deadline .

According to Bleacher Report’s Jake Fischer , Harrell is “considered available for trade” by the Wizards. Despite his frequent moving around of late, the big man brings plenty to the table including a tenacious inside game, an ability to hit the boards at a high level and play with a motor. He’s an appealing trade target for contending teams.

The Mavericks need to get creative to make an impactful addition. Acquiring Harrell would qualify for creativity.

Harrell would be a spark plug off head coach Jason Kidd’s bench. He’d provide a player who finishes with ease in the paint, can be a featured part of the second unit and perhaps a small five; Harrell isn’t a true power forward or center given his offensive tendencies and him being 6-foot-7.

In time, Harrell could be on the floor in-between Luka Doncic and Kristaps Porzingis and be the starting center if the latter encounters an injury. Harrell is a plug-and-play athlete. He’s accustomed to playoff basketball and would bring a specific skill set to the table that the Mavericks don’t have. Him being in the prime of his respective career is all the more reason to pull the trigger on a trade.

Dallas sends Washington a pair of young, could-be rotation players in Brown, a productive center, and Green, a capable shooter, accompanied by a future second-rounder. The Mavericks leave this trade an improved team.

All that said, the Mavericks may prefer not to trade for an impending free agent who likely wouldn’t be retained. 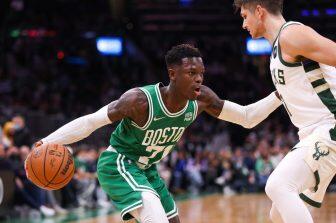 Outside of a recent four-game losing streak , the Bulls have been a force to be reckoned with this season. That said, every contender has a weakness. For the Bulls, that’s their bench.

Alex Caruso, Derrick Jones Jr. and Ayo Dosunmu make for a respectable trio of reserves, but as a whole, this unit needs a boost. Harrell gives the Bulls an interior offensive presence who can get points in the post and around the rim in a multitude of ways. Having Harrell coming off the bench for Nikola Vucevic would be incredible, as Chicago would still have a scorer in his own right near the basket.

Furthermore, Lonzo Ball will miss at least the next month due to a knee injury. While he doesn’t fill the ball-handling void, Harrell’s arrival provides head coach Billy Donovan with much-needed depth for the next month and the NBA playoffs.

Chicago, most notably, sends Washington a future first-rounder while Green and Brown could be rerouted or waived. The Bulls can afford the short-term investment in Harrell.

What could stop the Bulls from trading for Harrell, though, is them wanting to preserve their draft capital for a player who’s under contract for more than five months.

Related: NBA Power Rankings – Suns and Heat scorching, Lakers not so much

1) Montrezl Harrell to the Memphis Grizzlies

The Grizzlies get better with every passing game to the point where they look like a Western Conference contender. Trading for Harrell makes them even better.

Harrell would be a plausible pickup for head coach Taylor Jenkins’ bench. The former would back up center Steven Adams. Harrell gives the Grizzlies a sturdy and proven inside player who can overwhelm defenders in the paint and be a leading catalyst for the offense on the floor. 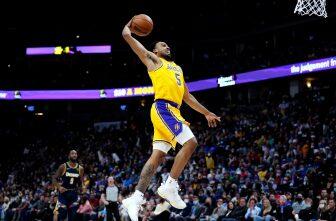 Alongside Tyus Jones, De’Anthony Melton, Ziaire Williams and Brandon Clarke, Harrell would be part of one of the best second units in the NBA, adding another starting-caliber player to a continually improving team. Depending on the matchup, Harrell could be on the floor at the end of games if the Grizzlies want to have five scoring threats to combat fellow Western Conference powerhouses.

The result of this trade would be the Grizzlies having scorers across the board and a boatload of productive players who are yet to reach 30. All the while, they have complementary veterans, like Harrell, who further enhance their operation.

Memphis sends Washington a pair of young players who could be immediate members of head coach Wes Unseld Jr.’s rotation, as Tillman is a skilled, young big man and Culver is a former top-10 pick who can create his own shot and defend. The Grizzlies leave this trade with a more efficient 10-man rotation.

Minnesota Timberwolves guard Patrick Beverley knows how to talk his trash on and off the court. Chris Paul of the
PHOENIX, AZ・2 DAYS AGO
Sportsnaut

There’s absolutely no way the Los Angeles Lakers will look into a LeBron James trade this summer, right? Absolutely no
LOS ANGELES, CA・2 DAYS AGO

Count Patrick Beverley as one who’s ignored the rapid decline of James Harden over the past few seasons. Sure, it’s
PHILADELPHIA, PA・1 DAY AGO
Sportsnaut

Game 1 hero Jimmy Butler isn’t much for rating his performance or basking in the achievement, even when topping the
MIAMI, FL・19 HOURS AGO
Sportsnaut

Auburn’s Jabari Smith is quite possibly the best prospect in the 2022 NBA Draft. The 6-foot-10 forward is a highly
NBA・19 HOURS AGO

The Golden State Warriors and Dallas Mavericks will do battle in the NBA Western Conference Finals. The winner of this
MEMPHIS, TN・19 HOURS AGO
Sportsnaut

Despite the absolute brilliance of Giannis Antetokounmpo, he wasn’t enough to lead the Milwaukee Bucks to back-to-back NBA championships. With
2 DAYS AGO
Sportsnaut

The Miami Heat on Wednesday listed guard Kyle Lowry as out for Thursday’s Game 2 of the Eastern Conference finals
MIAMI, FL・16 HOURS AGO
Sportsnaut

The 2022 Orlando Magic draft will include them selecting No. 1 overall late next month in Brooklyn. Orlando earned the
ORLANDO, FL・21 HOURS AGO

The Miami Heat overcame a double-digit first-half deficit at home against the Boston Celtics in Game 1 of their Eastern
MIAMI, FL・1 DAY AGO
Sportsnaut

The results of the 2022 NBA Draft lottery are now official with the Orlando Magic “earning” the right to pick
PORTLAND, OR・1 DAY AGO
Sportsnaut

With the 2022 NBA Draft order set, the Houston Rockets have the third selection, and it seems the team’s general
HOUSTON, TX・1 DAY AGO
Sportsnaut

On Wednesday, word emerged of the Minnesota Timberwolves moving closer to hiring their next president of basketball operations, with Tim
MINNEAPOLIS, MN・11 HOURS AGO
Sportsnaut

Ezi Magbegor scored a game-high 21 points as the host Seattle Storm held off the Chicago Sky 74-71 on Wednesday
CHICAGO, IL・9 HOURS AGO
Sportsnaut

The Phoenix Suns finished with the best record in the NBA only to suffer a humiliating Game 7 loss in
PHOENIX, AZ・2 DAYS AGO