Dunlap: Make The QB Competition A Real One 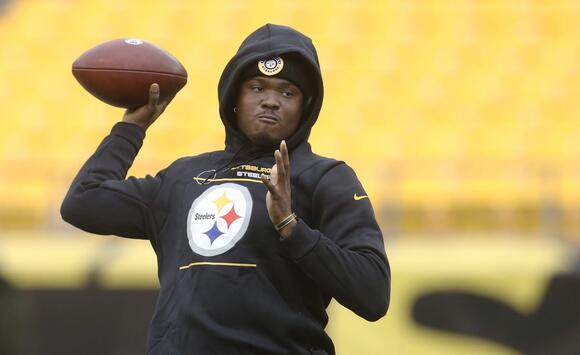 Apparently your Pittsburgh Steelers are going to have a good old-fashioned quarterback derby. Yep, a competition. A clash. A battle to see who the man is who gets the ball snapped to him for the 2022 NFL season.

Yeah, I’ll kind of believe it when I see it.

I’m just asking one thing clearly and succinctly here: If they are going to make it a competition, make it a real one.

Don’t feed me some mumbo-jumbo and then mark the playing cards, stack the deck or throw some funny dice around that craps table.

You see, everyone from head coach Mike Tomlin to the two primary combatants (at least to this point) Mason Rudolph and Dwayne Haskins have said as much. They have all explained it this way: essentially Rudolph and Haskins will both be on equal footing as camp gets underway to get to fill the void left by the retiring Ben Roethlisberger.

Memo to South Water Street --- Make it fair. That’s all I want.

There should be no incumbent. Tomlin (and Matt Canada, presuming he’s still the offensive coordinator) need to go into the competition and make it a proper one.

The reps need to be split evenly.

St. Vincent, or wherever camp takes place, has to be an exercise in fairness and nothing else.

The first team snaps need to be divided firmly down the middle. You can’t have one guy working with the first-teamers and the other guy working with some tomato can from Bemidji State who has absolutely no shot at making the team.

Whether it is just Rudolph and Haskins or someone else like Josh Dobbs added to the mix in the competition, it needs to be done fairly and squarely.

Same thing if they add an outside free agent to the mix — that player should truly compete and not be given anything.

And you know what? I have my doubts it will be.

Maybe I’m just a skeptic by nature, but I have my doubts and it is largely rooted in how the organization has treated Rudolph like some Golden Child in his time here.

It feels to me — and maybe I’m not being fair here — that Mason Rudolph is looked at as a guy needing to be knocked off the throne. That he’s the champion and someone else needs to take his belt.

And not just take his belt, but knock him out to do so.

This is an organization that stuck by Rudolph --- and vociferously --- through the whole Myles Garrett ordeal. So much so that head coach Mike Tomlin went on national television, unsolicited, to defend his backup quarterback.

This is also Mason Rudolph who the Steelers felt good enough about to extend a contract offer to before the 2021 season for this upcoming season. Not even Ben Roethlisberger was granted such a luxury.

So every bit of communication we have received from the Steelers is that there will be a true, genuine and authentic quarterback competition for that QB1 into next season.

I’m just wondering, though, if the Steelers don’t already have Rudolph pegged as the guy who they want to win it.

He’s started games with Carolina and the Chargers at mostly tackle, the Steelers signed a veteran offensive lineman to battle for depth in camp
PITTSBURGH, PA・2 DAYS AGO
93.7 The Fan

Steelers to celebrate 'Immaculate Reception' by bringing back '72 uniforms

The Steelers will celebrate the 50th anniversary of the Immaculate Reception on December 24 against the Las Vegas Raiders, a day after the actual event happened in 1972.
PITTSBURGH, PA・2 DAYS AGO
93.7 The Fan

In many ways, Friday probably felt very familiar to Kenny Pickett. A quick drive to the South Side, putting on a practice jersey and walking out to the fields at the UPMC Rooney Sports Complex.
PITTSBURGH, PA・2 DAYS AGO
93.7 The Fan

The Steelers have announced the signing of second-round pick, wide receiver George Pickens. The University of Georgia product signed a four-year deal Friday and is the first Steelers rookie to sign their rookie contract.
PITTSBURGH, PA・2 DAYS AGO

After missing Game 6, Sidney Crosby is practicing with the rest of the Pittsburgh Penguins lineup. Crosby was forced to miss Game 6 with an undisclosed upper-body injury
PITTSBURGH, PA・1 DAY AGO