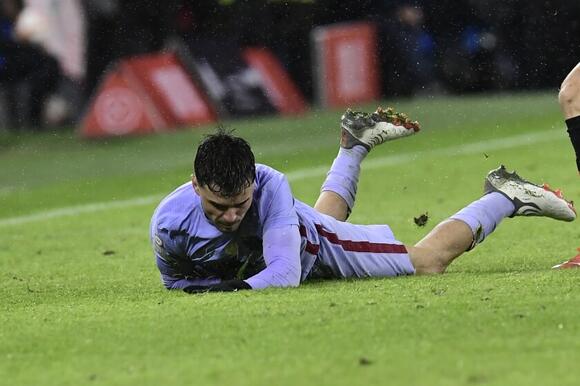 Barcelona's list of disappointments this season got longer Thursday with a loss to Athletic Bilbao in the round of 16 of the Copa del Rey.

Barcelona lost 3-2 in extra time to add to recent failures in the Spanish Super Cup and the Champions League. The Catalan club also trails Real Madrid by 17 points in the Spanish league, and the Europa League is the only title it can realistically play for in its first season since the departure of Lionel Messi, the Argentina star who moved to Paris Saint-Germain.

Madrid also needed extra time at Elche but avoided an upset thanks to Eden Hazard's late goal after the team went a man down and needed to come from behind to win 2-1.

Defending Copa champion Barcelona couldn't get past Athletic despite equalizing twice in a rematch of last year’s final, losing after Iker Munain converted a penalty kick late in the first half of extra time.

Munain put Athletic ahead two minutes into the match at San Mamés Stadium before Ferran Torres equalized in the 20th with his first goal since joining Barcelona — a beautiful curling shot into the top corner.

Iñigo Martínez restored the host's lead from close range in the 86th but Pedri González sent the match into extra time with a goal in stoppage time.

Barcelona, which couldn't keep Messi because of its financial struggles, didn't make it past the group stage in the Champions League and last week lost to Madrid in the semifinals of the Spanish Super Cup.

“We don't have any other choice than to keep believing in our project,” Barcelona coach Xavi Hernández said.

American defender Sergiño Dest, returning from a back injury and a positive COVID-19 test, entered in the 96th minute in his first appearance since Dec. 8.

Isco Alarcón and Hazard — who has played sparingly this season — scored in the second half of extra time to send Madrid into the Copa quarterfinals.

“I’m happy for Isco and Hazard,” Madrid coach Carlo Ancelotti said. “They haven’t played many minutes but they came through today.”

Hazard came on at the start of extra time and scored in the final minutes on a breakaway from near the midfield line. He picked up a pass by David Alaba and got around the goalkeeper before finding the open net for his first goal with Madrid since May.

Hazard himself thought he was offside and hesitated to celebrate at first but the goal was confirmed after a video review.

Gonzalo Verdú has scored for Elche in the first half of extra time with a shot from outside the area that fooled Madrid goalkeeper Andriy Lunin after deflecting on defender Dani Ceballos.

The goal came following a free kick that prompted the red card to Marcelo as he fouled a defender from behind to stop a counterattack.

Madrid responded when Isco redirected a shot by Ceballos inside the area after being set up by Casemiro.

Elche thought it had equalized just before the final whistle but the goal was called back because of a foul on a defender inside the area.

Madrid is seeking its first Copa title since 2013-14. It was stunned by third-division club Alcoyano in the round of 16 last season while still under coach Zinedine Zidane.

Madrid was coming off triumph in the Spanish Super Cup in Saudi Arabia, where it beat Barcelona in the semifinals and Athletic in the final.

Getafe defeated Granada 4-2 at home for its third win in its last four Spanish league matches.

The result moved the Madrid side to 16th place, four points from the relegation zone. Granada, which was coming off two draws, stay 14th.