Why Alibaba Stock Was Gaining Today

Shares of Alibaba (NYSE: BABA) were moving higher today, in tandem with a number of Chinese tech stocks . There was no company-specific news on the e-commerce giant, but a number of macro factors seemed to be pushing the stock higher. 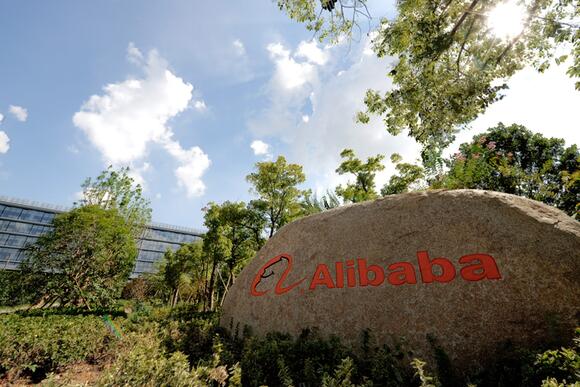 The Nasdaq entered a correction yesterday, meaning that the tech-heavy U.S. index is down more than 10% from its recent peak, reached in November. U.S. investors seem to be looking for other options at a time when the Fed has signaled that it could raise interest rates up to three times this year, squeezing stock valuations as it attempts to put the brakes on inflation.

As a result, investors are looking for other options, and China is beckoning after Chinese stocks like Alibaba mostly got slaughtered last year amid a crackdown on big tech companies by the central government. In a note this morning, HSBC cut its rating on U.S. stocks and said China could present a good alternative to U.S. equities. At the same time that the Federal Reserve is expected to raise interest rates, investors are increasingly expecting China to ease its monetary policy, as the world's No. 2 economy has struggled during the pandemic, in part due to strict lockdown protocols.

Chinese stocks are also significantly cheaper than their U.S. counterparts, making them an appealing sector to rotate into. Alibaba trades at a price-to-earnings ratio of just 15 based on this-year's expected earnings per share.

It's tempting to call this a turning point for Alibaba and its Chinese peers, though every time over the last year when it seemed like Alibaba shares were bottoming out, the stock continued to slide even more. However, with market sentiment changing, there does appear to be more upside than downside to Alibaba at this point.

Despite the sluggish Chinese economy and regulatory headwinds, Alibaba's revenue is expected to grow 23% this year. If investors continue to move out of U.S. tech stocks, Chinese alternatives like Alibaba could win.

E-commerce has fallen out of favor with some investors but the long-term opportunity is undeniable.
STOCKS・2 DAYS AGO
electrek.co

Silk Road founder Ross Ulbricht is forfeiting billions of dollars worth of Bitcoin (BTC) and other crypto assets to the US government. According to a new court filing, Ulbricht will relinquish any claim to over 69,000 BTC and undisclosed amounts of Bitcoin Gold (BTG), Bitcoin SV (BSV) and Bitcoin Cash (BCH) worth a combined $3 billion as part of a settlement.
PUBLIC SAFETY・29 DAYS AGO
Markets Insider

Indonesia accounts for about half of the world's supply of palm oil — the world's most widely used vegetable oil.
INDUSTRY・29 DAYS AGO

Sign up for the Fortune Features email list so you don’t miss our biggest features, exclusive interviews, and investigations. U.S. tariffs on Chinese imports survived a change in administration, but the trade-war-era levies may not survive record inflation. “We’re certainly looking at where we see costs being raised and,...
PRESIDENTIAL ELECTION・28 DAYS AGO
The Motley Fool

Two of the legendary investor's recent purchases especially stand out.
STOCKS・10 HOURS AGO
The Motley Fool

These passive income powerhouses, with yields ranging between 5.5% and 12%, can combat historically high inflation and make patient investors richer over time.
STOCKS・2 DAYS AGO
Fortune

Sign up for the Fortune Features email list so you don’t miss our biggest features, exclusive interviews, and investigations. Shanghai’s 25 million residents have endured an extreme COVID lockdown for nearly a month—and now a new nightmarish topic is trending on Weibo, the country’s Twitter-like social media platform.
PUBLIC HEALTH・29 DAYS AGO
The Motley Fool

SoFi vs. Ally Financial: Why 1 is a Buffett Stock and the Other Isn't

Ally and SoFi have similar business models, but one is a Warren Buffett stock and the other isn't.
STOCKS・2 DAYS AGO
The Motley Fool

Snap's regulatory filing sent much of Wall Street into a tailspin.
MARKETS・2 HOURS AGO
The Motley Fool

Why Snap Stock Cratered on Tuesday