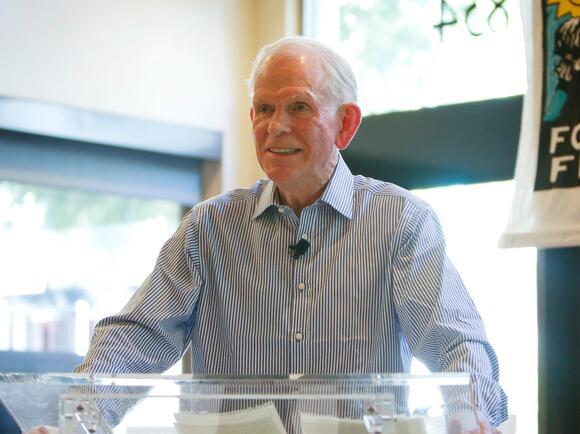 Jeremy Grantham, the legendary investor who has predicted the last three market bubbles, foresees the S&P 500 crashing almost 50% after the fourth "superbubble" the US has ever seen bursts — even with multiple efforts underway to prevent it.

The market historian, who has repeatedly warned investors they're caught in a historic bubble, said the benchmark index may slip to around 2,500 —  a downside of roughly 44% from Thursday's close and 48% from January's peak. The tech-heavy Nasdaq Composite, meanwhile, might see a sharper downturn, he added.

"This time last year it looked like we might have a standard bubble with resulting standard pain for the economy," Grantham said in a note published Thursday on the website of his Boston-based asset management firm, GMO. "But during the year, the bubble advanced to the category of superbubble, one of only three in modern times in US equities, and the potential pain has increased accordingly."

What made the bubble worse, according to the investor, is how it's been accompanied by extremely low interest rates and high bond prices as well as a bubble in housing and an "incipient bubble" in commodities.

He also touched on an occurrence that happened in 1929 and 2000 that is replaying today: the underperformance of speculative stocks as the blue chips rise.

And the "touchy-feely characteristic of crazy investor behavior" is indicative of a late-stage bubble, the 83-year-old added. Last year saw the rapid ascent of meme stocks such as GameStop and AMC in addition to cryptocurrencies like dogecoin as well as non-fungible tokens.

"This checklist for a superbubble running through its phases is now complete and the wild rumpus can begin at any time," he said. "When pessimism returns to markets, we face the largest potential markdown of perceived wealth in US history."

He compared this bubble to Japan in the 1980s, which saw two asset bubbles — real estate and stocks — together. The US, in contrast, has three and a half major asset classes — stocks, bonds, real estate, and commodities — bubbling simultaneously for the first time.

"And if valuations across all of these asset classes return even two-thirds of the way back to historical norms, total wealth losses will be on the order of $35 trillion in the US alone," he said.

His advice to investors?

Avoid US equities, invest in value stocks of emerging markets and several cheaper developed countries such as Japan. Plus, have some cash for flexibility, as well as a little gold and silver.

And as for crypto, that asset class leaves him "increasingly feeling like the boy watching the naked emperor passing in procession," he said.

Jim Cramer just said he thinks we have already hit bottom. But I agree with this guy that there is quite a lot more to fall and it will.

All of these big investors want it to crash so they can get richer and we can lose our pension funds.

All that means is, when it happens there will be an incredible buying opportunity for many

The stock market won't find its bottom until the Federal Reserve pauses its current tightening cycle, the consensus on Wall Street seems to be. For the Fed to pause hiking interest rates, it needs to see lower gas prices, inflation, and GDP growth, according to Stifel. Stocks will bottom "when...
STOCKS・2 DAYS AGO
Markets Insider

"You're going to have an environment of negative real returns," Dalio said. "Everything can't go up all the time. That system won't work that way."
BUSINESS・3 DAYS AGO
Markets Insider

"This circus show has been a major overhang on Tesla's stock and has been a black eye for Musk so far," Wedbush's Dan Ives wrote.
STOCKS・3 DAYS AGO
Markets Insider

Elon Musk is no longer part of the $200 billion club as Tesla's stock continues to slide, but he's still comfortably the richest person in the world

Elon Musk's wealth fell 5.4% to $193 billion on Tuesday as Tesla shares dropped 7%. Uncertainty over Musk's purchase of Twitter has driven a sell-off in shares of Tesla, which have fallen 41% this year. Musk is no longer worth $200 billion, but he's still $65 billion richer than Jeff...
STOCKS・3 DAYS AGO

A deeper drop in Russian oil supply is likely to trigger a global recession and a full-blown energy crisis, Bank of America warns

A further decline in Russian oil supply is likely to spark a global recession, Bank of America said Friday. The bank warned oil prices could hit $150 a barrel, and an energy crisis could ensue, if supplies fall sharply. Russia's oil production has fallen by around 1 million barrels per...
ENERGY INDUSTRY・21 HOURS AGO
Markets Insider

The average gallon of gas in the US hit a record high of $4.59 on Tuesday, about 51% higher than a year ago.
TRAFFIC・1 DAY AGO
BGR.com

A massive crater known as the “mouth to hell” began opening in the 1960s. Now, over 60 years later, the crater continues to grow, swallowing everything in its path. The most worrying part, though, is that scientists have no idea how to stop it. Russia’s “mouth to hell”...
SCIENCE・2 DAYS AGO
Markets Insider

China’s latest aggressive military activities near Taiwan have many observers speculating if, or when, Beijing will invade the island democracy. If China does end up moving against the island, the process started last weekend, when Beijing made yet another assertive messaging effort and Washington did the exact opposite. When...
POLITICS・1 DAY AGO
Markets Insider

The average retail investor's portfolio has lost 32% of its value in this year's sell-off — but that hasn't stopped them from buying the dip in stocks, research firm says

Investors buying the dip in stocks have rescued the S&P 500 from sharper declines recently. The index briefly fell into a bear market last week.
RETAIL・2 DAYS AGO
Markets Insider

The US was a net importer of natural gas just seven years ago. Today, it's a top exporter. In contrast, Europe is now facing an energy crunch in part due to under-investment in fossil fuels. The crisis is sparking a rethink of the world's transition to green energy.
ENERGY INDUSTRY・1 DAY AGO
Markets Insider

Markets aren't confident that the Federal Reserve can tame record inflation, Bill Ackman tweeted Tuesday. He predicts that inflation can only come down if the Fed aggressively raises rates, or if stocks crash. "It ends when the Fed puts a line in the sand on inflation and says it will...
BUSINESS・3 DAYS AGO

Twitter jumps 4.5% after Elon Musk puts up another $6.25 billion of his own wealth to fund the takeover deal

Musk had previously declared his Twitter takeover "on hold" - but has now upped the amount of equity he's committing to the deal.
STOCKS・1 DAY AGO
Markets Insider

The investment bank now thinks bitcoin and digital assets should rebound after the great sell-off of 2021 and 2022.
STOCKS・3 DAYS AGO
Markets Insider

What's next for the US housing bubble? Industry experts break down the bull and bear cases for home prices in the months ahead.

Where are home prices headed the rest of this year? Here's a look at both sides of the argument from some of the most renowned experts in real estate.
REAL ESTATE・1 DAY AGO
Business Insider

Great Resignation regret is sweeping the nation as workers who quit for more money quit again: 'It sucks to be miserable'

For a year now, Americans have been quitting for higher pay and flexibility — it might work, but liking your job is also a big deal.
RETAIL・3 DAYS AGO
Markets Insider

Bill Miller touted his longstanding bets on Amazon and bitcoin during a recent podcast. Investors are in a new era of rising rates and inflation, the Miller Value Partners boss said. Miller took aim at Warren Buffett's criticism of bitcoin as an unproductive, worthless asset.
STOCKS・2 DAYS AGO
Markets Insider

Hong Kong lost 93,000 residents in 2020, followed by another 23,000 in 2021. But early estimates show this year will see far more people go. Many people and companies are moving to Singapore, though some expatriates are returning home and Hong Kongers are applying for residency under new visa programs launched in Canada and the United Kingdom.
ECONOMY・1 DAY AGO