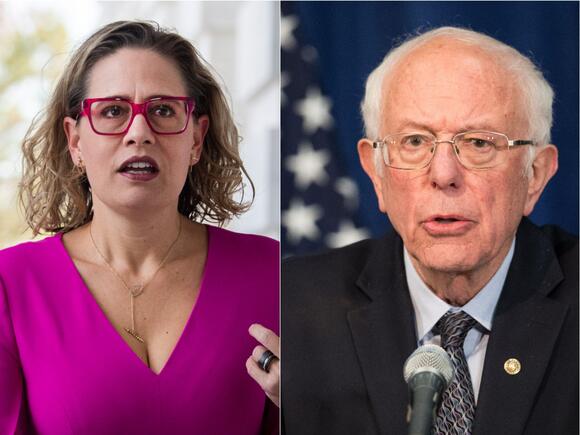 Alumni of Sen. Bernie Sanders' presidential campaigns are at the forefront of efforts to primary Sen. Kyrsten Sinema, and they just got a major boost from their old boss.

Scattered among at least three different efforts to primary Sinema in Arizona are several notable Sanders supporters, who say they are acting independently of the Vermont Independent. Still, they believe his criticism of Sinema will boost their efforts. While Sinema, who represents a purple state, has sometimes sided with Republicans in Congress, the efforts by Sanders' acolytes and the growing disdain from her own state party signals a building challenge to Sinema from the left.

On Wednesday, Sanders called for primary challenges against his colleagues who did not vote to end the filibuster — namely, Sinema and West Virginia Sen. Joe Manchin, both conservative Democrats.

"These are people who I think have undermined the president of the United States," Sanders told reporters after a motion to change Senate rules failed late Wednesday night, and added that they "can expect to find primary challenges."

"I commend him in saying that," said Brianna Westbrook, a former Sanders surrogate now running for the Arizona legislature, and a leading organizer of the Sinema Primary Pledge. "I hope other senators join him."

Chuck Rocha, a strategist and former senior advisor on Sanders' 2016 and 2020 presidential campaigns, is leading a different effort to draft Rep. Ruben Gallego of Arizona into the 2024 Democratic primary. Along with Westbrook, Belen Sisa, Sander's national Latino press secretary in 2020, and Dan O'Neal, a member of Our Revolution Arizona in the 2020 election, are all signatories of the Sinema Primary Pledge.

Westbrook said that 2020 supporters of Sens. Elizabeth Warren of Massachusetts and Amy Klobuchar of Minnesota, as well as President Joe Biden, had also signed onto the pledge.

"We didn't coordinate this," Rocha told Insider. "I think it's because Bernie Sanders Democrats are part of the activist wing of the party."

Sanders' former staffers aren't taking their marching orders from him, Rocha said, but he believed the senator's statement this week boosted their efforts.

"I think what me and others started, is becoming the mainstream of where everybody is right now," Rocha said.

Sinema's office did not immediately respond to a request for comment. Explaining her moderate stance, she has frequently invoked the late Republican Sen. John McCain, who held her Senate seat until his death in 2018. Democrats are still gaining ground in Arizona, a purple state where they represent less than a third of all voters.

Sinema and Manchin both voted "no" on a motion to change the Senate filibuster rules on Wednesday night. Sinema had previously said that altering the rule would "worsen the underlying disease of division infecting our country."

But the upstart primary effort from Sanders supporters in her state signals a shift within Arizona Democratic politics away from the more centrist lane that Sinema occupies, and towards a more progressive stance in line with Sanders. Her refusal to vote with her fellow Senate Democrats to alter the chamber's filibuster rules in order to pass voting rights legislation has enraged her constituents and put her out of step with her party back home.

In October, the party issued a resolution that threatened a vote of no confidence if Sinema did not vote to abolish or alter the filibuster.

The Arizona Democratic Party is "without a doubt" becoming more progressive as younger voters join its ranks, said Westbrook, who also serves as the party's education coordinator.

"I don't think she understands the consequences of her actions," Westbrook said. "It's like she's almost playing politics like it's 20 years ago. She doesn't understand it's not the same as it used to be."

Funny that Sanders, the most dangerous man in Congress, is calling for the only 2 free-thinking democrats in Congress to be thrown out. Imagine that.

Those that are voting to remove the filibuster are doing nothing but dividing this country more that it already is. Enough is enough. If you want a totalitarian dictatorship go live in some other country like China..or North Korea. quit trying to make us like them.

In West Virginia, people would see an average premium hike of $1,536 per person if ACA subsidies aren't extended, according to a Families USA report.
CONGRESS & COURTS・3 DAYS AGO
Business Insider

Progressives claim victory in three key House races, which have yet to be called. Wins could give progressives much-needed momentum in the primaries.
PENNSYLVANIA STATE・4 HOURS AGO
Business Insider

The effort to strike a deal with Manchin hasn't gone anywhere in months. Some Democrats in the room with him don't know if he wants a bill.
PRESIDENTIAL ELECTION・4 HOURS AGO
WashingtonExaminer

When President Joe Biden named Kamala Harris as his running mate, he promised his former campaign rival would be one of the most influential voices in the White House.
PRESIDENTIAL ELECTION・23 DAYS AGO

Greene testified on Friday that she didn't recall whether she asked Trump to invoke military rule, despite telling Meadows to relay the idea to Trump.
ATLANTA, GA・24 DAYS AGO
Salon

Once a moderate Republican, Elise Stefanik is now at the center of the anger over the Buffalo shooting

Stefanik, the No. 3 House Republican, lashed out at Democrats and accused the party of using illegal immigration to eventually register more voters.
BUFFALO, NY・3 DAYS AGO
Business Insider

In the latest set of text messages between the Fox News host and Trump's former chief of staff, Meadows told Hannity to "Stress every vote matters."
PRESIDENTIAL ELECTION・24 DAYS AGO

Colorado Governor Jared Polis cited the "impacts of inflation and the cost of living" as reasons for the tax rebate program.
COLORADO STATE・24 DAYS AGO
HuffPost

Harvard polled Americans under 30 who are likely to vote in the midterms and found 85% of them want some government action on student loan debt.
PRESIDENTIAL ELECTION・24 DAYS AGO
Business Insider

An attorney for the campaign said they thought they were allowed to use the funds based on a "good faith" understanding of the "highly confusing" rules.
FLORIDA STATE・1 DAY AGO
Newsweek

Rep. Greene has repeatedly pushed the conspiracy theory that left-wing activists and rogue FBI agents carried out the siege.
GEORGIA STATE・24 DAYS AGO

Separately, 192 Republicans voted against a bill that would send the FDA $28 million to ensure that future baby formula shortages do not happen again.
OLMSTED FALLS, OH・14 HOURS AGO
Business Insider

GOP congressman who's been subpoenaed by the January 6 committee is backing Kathy Barnette, a PA Senate candidate who marched with Proud Boys in DC

The embattled North Carolina Republican closing down the committee could indicate he's looking to step away from politics — at least for the moment.
CONGRESS & COURTS・1 DAY AGO
Business Insider