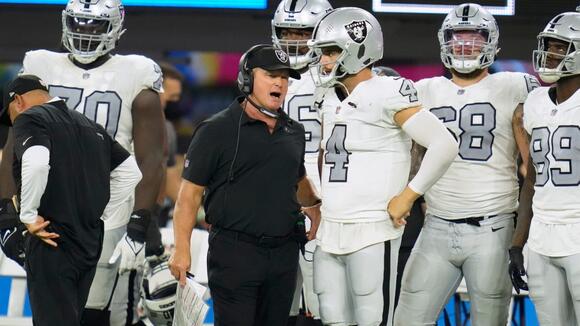 Rich Bisaccia appeared to be a welcome replacement for Jon Gruden in Las Vegas.

The Raiders went 7–5 under interim coach Rich Bisaccia in 2021, and the team appeared to rally around him after Jon Gruden resigned following the release of racist, misogynistic and anti-LGBTQ+ emails . So will Bisaccia get another chance with Las Vegas in 2022? He seems to have the support of some key pieces in the desert.

Raiders defensive end Maxx Crosby endorsed Bisaccia for Las Vegas's coaching vacancy on Tuesday, noting Bisaccia is “the best man for the job.” One anonymous Raider detailed the benefit of having Bisaccia as coach rather than Gruden, telling Bally Sports “[Bisaccia] listened to the players.”

“We didn’t have Gruden grinding us late in the year,” a Raiders veteran said. “Gruden would kill us, and we would fall apart. The reason this team played so well down the stretch is that Rich listened to the players and took it easy over the back half of the season.”

Bisaccia met with Raiders owner Mark Davis on Wednesday. Las Vegas is expected to undergo a wide search for its new head coach, and Bisaccia reportedly faces an uphill climb to get the gig outside of his interim duties

Las Vegas snapped a four-year playoff drought in 2021 as it finished 10–7 before losing to Joe Burrow and the Bengals in the AFC wild-card round.

The UCF coach had little to say about his former rival coaches.
AUBURN, AL・1 DAY AGO
Sports Illustrated

The Texas A&M coach had some choice words for Saban.
COLLEGE STATION, TX・1 DAY AGO

The Golden State Warriors are in the conference finals and could be headed back to the NBA Finals for the first time since 2019. But their reign at the top will not be easy to maintain. The Warriors have $171 million in salaries committed for next season and $144 million...
SAN FRANCISCO, CA・15 HOURS AGO
Sports Illustrated

The Alabama coach: "There’s nothing illegal about doing this. It’s the system. That’s the issue I have."
COLLEGE SPORTS・1 DAY AGO

The guard will only play for the Jayhwaks in his senior season if he withdraws from the 2022 NBA draft.
KANSAS STATE・1 DAY AGO
Sports Illustrated

A number of players who declared for the NBA draft also entered their names in the portal should they return to school.
COLLEGE SPORTS・2 DAYS AGO
Sports Illustrated

The quarterback played in Indianapolis for one season.
INDIANAPOLIS, IN・2 DAYS AGO
Sports Illustrated

The two, along with Joe Buck, worked together at Fox for 10 years.
NFL・19 HOURS AGO
Sports Illustrated

The Alabama coach clarified that his comments came from concern about NIL in general.
COLLEGE STATION, TX・1 DAY AGO
Sports Illustrated

Bet on this four-leg, same-game parlay at SI Sportsbook for Game 2 of the Western Conference finals between the Mavericks and Warriors.
DALLAS, TX・21 HOURS AGO
Sports Illustrated