Deadline understands that the Disney-owned network has canceled the unscripted series after one season.

Separately, ABC has parked the Jimmy Kimmel-hosted Who Wants to Be a Millionaire. While the game show , which is based on the long-running British format, has not been officially axed and its status is currently to be determined, there are no plans to make further episodes. The network has, however, left the door open for it to return in the future, not particularly surprising given that it is hosted and exec produced by its late-night star Kimmel.

The Pooch Perfect cancelation is also not a huge surprise given that the series was one of the network’s lowest rated reality series of last year and it was not mentioned when the network made a slew of unscripted renewals last year.

The show, which is based on an Australian format, showcased ten of the best dog groomers in the country, along with their assistants, competing in a series of challenges.

Each week, teams competed in two challenges: the Immunity Puppertunity challenge and the Ultimutt Challenge showdown. The teams will face off in the grooming challenges, showcasing their creations on the ‘dogwalk’. There was one elimination each week until the season finale, where the top three teams competed for a giant cash prize and the Pooch Perfect trophy.

The Bridesmaids star hosted, as she did the Australian version, and was joined by Lisa Vanderpump, celebrity dog groomer Jorge Bendersky and veterinarian Dr. Callie Harris as the trio of judges.

The series was produced by Beyond Media Rights. 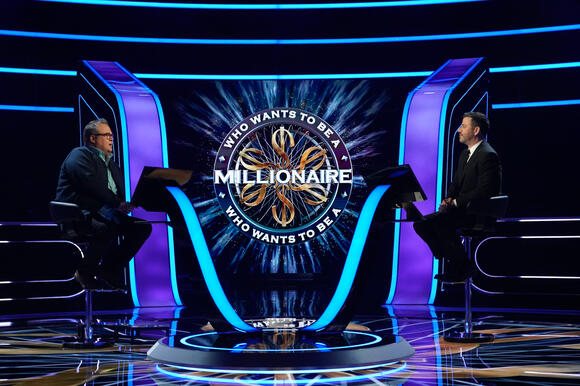 Who Wants to Be a Millionaire aired two seasons in 2020. The reboot was produced under unusual circumstances. The first season, consisting of eight episodes, filmed the weekend of March 14 – as Covid first began to hit the U.S. – without an audience and the second season was produced in August 2020 under strict Covid protocols and a minimal crew.

Celebrity contestants, playing for charity, who appeared on the reboot included Eric Stonestreet, Will Forte, Tiffany Haddish, Kaitlin Olson, Jane Fonda and Anderson Cooper. They were handed a new “Ask the Host” lifeline given the lack of an audience. Season two also featured frontline workers and others severely affected by COVID-19.

Robin Roberts got emotional as she opened up about her relationship with partner Amber Laign, especially in the midst of a challenging health battle. The Good Morning America star made an appearance on The Ellen DeGeneres Show to promote her new book, Brighter By the Day. VIDEO: Robin Roberts enjoys...
CELEBRITIES・24 DAYS AGO

Netflix has canceled another one of its major shows, with this one getting the ax after only two seasons. Variety reports that hit sci-fi drama Raising Dion has been dropped by the streamer, following its recent season debut. The news seems to have been revealed by series star Sammi Haney, who shared the news with fans on Instagram. "Sad to say that Raising Dion is CANCELED [sic] Thank you for all of the amazing support we got from all of our wonderful fans!" Haney wrote, in part. "Season 2 was a success, equal to Season 1, even if just looking at how many people watched all of it and wanted a season 3!"
TV SERIES・23 DAYS AGO
SheKnows

Click here to read the full article. It seems like everyone was rooting for Renée Zellweger and Ant Anstead to get together, including an unexpected duo: the Property Brothers. Drew and Jonathan Scott recently revealed that they were the ones that ended up getting Zellweger and Anstead to meet, and subsequently fall in love. And their hard work ended up paying off! Back on April 14, 2022, the Scott brothers sat down with ExtraTV to talk about everything from Drew’s upcoming fatherhood to Jonathan loving GF Zooey Deschanel’s Vanity Fair gown. While we loved the entire interview, we’re losing it over...
CELEBRITIES・25 DAYS AGO
SheKnows

Playing bad has been very, very good for the actor. It took 42 years of working in soaps for John Aniston (Victor, Days of Our Lives) to get his first Daytime Emmy nomination back in 2017. And although he wound up losing to Steve Burton — who at the time was playing Dylan on The Young and the Restless — we’re thrilled to announce that this year, Aniston is 100 percent guaranteed to walk away a winner. Why? Because the National Academy of Television Arts and Sciences has announced that during the live ceremony held on June 24, Aniston will be the recipient of the Lifetime Achievement Award.
CELEBRITIES・23 DAYS AGO
The Independent

On Monday (April 25th), long-time “Wheel of Fortune” co-host Vanna White took to her Instagram account to announce her cat Stella passed away. The feline was 16 years old. “My sweet Stella has gone to kitty heaven,” Vanna White declared in the social media post, which features a snapshot of her kissing the cat. “I miss her so much and will cherish the special memories of the 16 years we had together.”
PETS・24 DAYS AGO
Hello Magazine

The Today Show stars, including Hoda Kotb, Savannah Guthrie, and Craig Melvin, are reeling from the death of a beloved fellow Today host, one whose hiring onto the show made history at NBC studios. The co-hosts took a moment out of Monday morning's show to honor the legacy of Jim...
CELEBRITIES・24 DAYS AGO
The US Sun

A WOMAN has claimed she got very creative when it came to getting revenge on her ex who cheated on her. TikTok user @kykynicolee uploaded a video saying how she posed as a recruiter and put her love rat partner through a gruelling month-long job interview - before rejecting him.
RELATIONSHIP ADVICE・29 DAYS AGO
The US Sun

GENERAL Hospital revealed a major character change is coming to the show this week as one of its stars battles health issues. There are often comings and goings happenings on soaps, and the latest cast switch-up involves longtime cast member Nancy Lee Grahn. Nancy, who turns 66 on Thursday, has...
CELEBRITIES・24 DAYS AGO

After weeks of silence, Chris Rock has finally addressed his now-infamous incident with Will Smith at March's 94th Annual Academy Awards. During another sold-out show at Baltimore's Lyric Performing Arts Center on Friday, Rock directly referenced the slap, but only spent a second on it before moving on with his set.
BALTIMORE, MD・25 DAYS AGO
People

Megan Fox wants her kids to express themselves however they please. In a wide-ranging interview with Glamour U.K. for their April cover story, the 35-year-old actress opens up about how she teaches her children, Journey River, 5, Bodhi Ransom, 8, and Noah Shannon, 9, about gender identity and encourages them to be confident in who they are.
FAMILY RELATIONSHIPS・23 DAYS AGO
Deadline

Click here to read the full article. Paramount is moving one of its upcoming Yellowstone spinoffs from its streaming service to linear. 6666, from Taylor Sheridan, is moving to Paramount Network, having originally been announced as a Paramount+ original. Paramount sources said that as it produces and develops these series, it is regularly thinking about how to maximise the release strategy and being nimble is key. The series takes place when Comanches still ruled West Texas and no ranch in America is more steeped in the history of the West than the 6666. Still operating as it did two centuries before, and encompassing...
TV SERIES・1 DAY AGO
hotnewhiphop.com

Flo Milli is setting some boundaries. The Alabama native is known for hits like "In The Party," "May I," and "Not Friendly," and while she loves to see fans in the audience having a good time and turning up at her shows, she's not impressed with watching them snort lines from up on stage.
CELEBRITIES・25 DAYS AGO
PopCrush

Last month it was revealed that Sharon Osbourne would be returning to television, partnered with Piers Morgan on a new U.K. series named The Talk. This comes nearly a year after Osbourne was suspended and eventually exited the U.S. talk show The Talk after expressing her support for Morgan in an intense discussion over race with co-host Sheryl Underwood. Now, in a new interview with the U.K.'s Sunday Times, Osbourne reveals how cancel culture impacted her as she eventually parted ways with her longtime daytime talk series amidst public backlash.
CELEBRITIES・24 DAYS AGO
Hello Magazine

Chicago Fire actor Jesse Spencer has landed a brand new role following his departure from the smash-hit NBC franchise. The 43-year-old actor, who played Captain Matthew Casey in the firefighter drama between 2012 and 2021, has been cast in the upcoming Disney+ drama-comedy Last Days of the Space Age which will see him return to his native Australia.
CHICAGO, IL・2 DAYS AGO
Popculture

90 Day Fiancé stars Anna-Marie Campisi and Mursel Mistanoglu have added a little boy to their family! The couple, who tied the knot on Season 7 of the TLC reality show, announced on Instagram this week that their son, Gokhan John, had been born via a surrogate on Monday, April 11 after the couple's initial struggle with fertility.
FAMILY RELATIONSHIPS・24 DAYS AGO
The Independent

A woman has revealed several “red flags” that she found in the apartment of the man she’s dating, which included two books about pregnancy and a woman’s ring.In a recent video shared to TikTok, Devin, @discoveringdevin, filmed herself sitting on a bed and putting her thumb down, as the text reads: “Red flags in his apartment.”She then began by showing four Apple MacBooks, all placed on top of each other, on a desk. “Four laptops…what are you hiding?” Devin wrote in the text over the clip.Next, she documented what appeared to be a “girl’s ring” on a white shelf....
RELATIONSHIP ADVICE・24 DAYS AGO