Is This Why Nio Stock Is Rising Today?

Shares of Chinese electric-vehicle maker Nio (NYSE: NIO) were trading higher on Thursday, after a German trade publication reported that Nio has hired a Volvo Car executive to manage its entry into the German auto market.

As of 1:30 p.m. ET, Nio's American depositary shares were up about 5.8% from Wednesday's closing price.

German auto-industry trade publication kfz-betrieb reported on Thursday that Ralph Kranz, currently director of commercial operations for Volvo's sales organization in Germany, will leave Volvo to take charge of Nio's efforts in Germany as of March 1.

Kranz is a capable executive with a resume that includes stints at Aston Martin and Toyota , in addition to 10 years with Volvo. On paper, at least, he looks like a good hire for Nio. But I think today's stock price action is less about Kranz himself and more about the fact that the timing of his hire suggests strongly that Nio is moving ahead with its plan to enter the German market before the end of 2022. 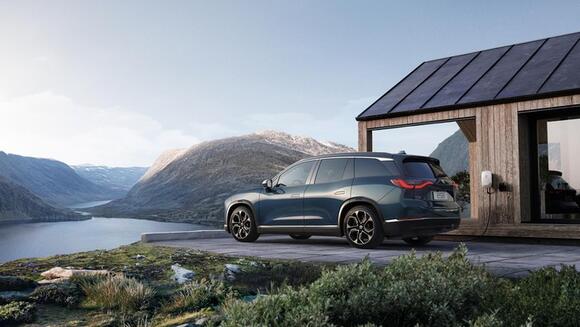 Nio already sells vehicles in Norway, where the electric vehicle adoption rate is very high. It's expected to expand into Germany and a few other European markets by the end of this year. Image source: Nio.

While Nio has plenty of demand in its home country, establishing a larger presence in Europe -- where electric vehicle adoption is rapidly accelerating -- has long been seen as key to its growth plan. The company already sells vehicles in Norway, and is expected to launch operations in the Netherlands, Sweden, and Denmark this year as well.

Today's report isn't surprising news, but it is bullish news, and it's probably helping to push Nio's stock higher today.

Electric vehicle investors won't have to wait too long for a detailed update from the Chinese automaker. While Nio hasn't yet announced a date for its fourth-quarter and full-year 2021 earnings report, the company's past practice suggests that we can expect the report sometime in mid- to late February.

The lights are flashing green for long-term growth opportunities for these two tech stocks.
STOCKS・16 HOURS AGO
The Motley Fool

Deere stock has come down in price, and there are some headwinds worth monitoring.
STOCKS・2 DAYS AGO

These stocks have been big winners in the past and they could rise even more over the next decade.
STOCKS・1 DAY AGO
Markets Insider

The average gallon of gas in the US hit a record high of $4.59 on Tuesday, about 51% higher than a year ago.
TRAFFIC・1 DAY AGO
The Motley Fool

If you have $77,280 that you can afford to invest, these stocks can turn that into $400 in recurring monthly income.
STOCKS・17 HOURS AGO

Believing in electric vehicles back then would have made you very wealthy indeed.
STOCKS・14 HOURS AGO
The Motley Fool

Income investors can find a safe haven in these dividend stock stalwarts.
STOCKS・2 DAYS AGO
The Motley Fool

Your financial goals define the role dividend stocks can play (or not play) in your portfolio.
STOCKS・17 HOURS AGO
The Motley Fool

MercadoLibre is a success story that shows inflation is not necessarily an obstacle to rising profits.
STOCKS・17 HOURS AGO
The Motley Fool

Boost your passive income stream with companies you can count on.
STOCKS・19 HOURS AGO
The Motley Fool